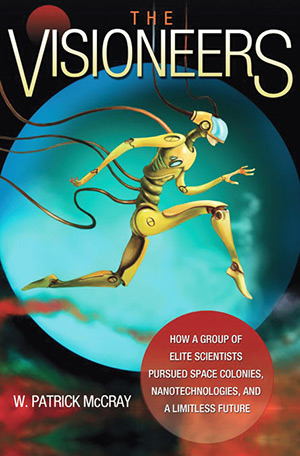 The 1970s dawned on a fragile world that was decidedly nervous about the future. The Vietnam War, environmental concerns, political corruption, and society’s growing distrust of technology all added up to an unhappy culture unsure of its direction and priorities. By the end of that decade, however, attitudes had done a 180 degree flip. Optimism about the future, and our ability to embrace it, ruled the day.

Setting the stage, W. Patrick McCray, a history professor at the University of California Santa Barbara, and author of popular astronomy titles Keep Watching the Skies! and Giant Telescopes, recalls the uncertainties raised in the 1960s and early ’70s. A burgeoning ecology movement warned about pollution and waste. The famous 1968 “Earthrise” photo depicted our planet as “Spaceship Earth,” alone in space, a closed system in delicate balance, easily upset by careless humanity. The bleak recommendations of “The Limits to Growth,” an infamous 1972 paper about the dangers of unchecked growth and limited resources, released by an influential group of researchers called the Club of Rome, could’ve been the last nail in the coffin of optimism and progress.

Working from the latest theories of “urban dynamics” as well as projections for the availability of resources, a detailed computer model designed with funding from the Club of Rome predicted Earth’s likely future. The results weren’t pretty: Earth was being used up, and society was being told it must prepare to face dire consequences.

So what made the dramatic shift from grim ’70s pessimism to bright ’80s optimism possible?

McCray says the change happened thanks to a handful of charismatic “Visioneers” who were part scientist, part visionary, part cheerleader. He follows two of these amazing researchers, physicist Gerard O’Neill and nanotech-meister K. Eric Drexler, through the cultural maelstrom. Their ability to communicate the importance of their work and their infectious enthusiasm captured the imaginations of millions at a time when hope for the future was hard to find.

O’Neill, a physicist at Princeton, championed the idea of people living and working in space. He drew up designs for workable space habitats — but he didn’t stop there, and that, McCray says, is exactly what sets O’Neill apart from other pro-space scientists of the era. O’Neill actively promoted his ideas through lectures, articles, and, later, a persuasive book that offered the thrill of exploration along with hope to those fearful of our limitations. Moving to the “High Frontier” would do more than relieve Earth’s population pressures and bring new resources from space to a needy planet. To O’Neill, space was a kind of “tabula rasa,” a new world where the species could test its mettle, challenge itself, explore alternative lifestyles, and learn what it meant to be human. O’Neill’s powerful vision stirred scientists, students, adventurers, and outsiders, and McCray deftly captures the energy of those heady days. Timothy Leary gave O’Neill’s freewheeling colonies a big thumbs up, while grassroots organizations like the L5 Society looked forward to life in orbit, complete with “solar power and zero-g sex.” Whole Earth Catalog creator Stewart Brand launched CoEvolution Quarterly, a lively magazine devoted to exploring the edges of technology, science, nature, and society. A few years later, slick, glossy OMNI magazine made those ideas mainstream, spreading the gospel of a limitless future between ads for Mensa, the Rosicrucians, and Heathkit computers.

MIT undergraduate K. Eric Drexler, just one of the students inspired by O’Neill, took up the role of visioneer himself. McCray follows Drexler’s career from O’Neill protégé, designing solar sails and mass drivers to move ore across space, to nanotech prophet. Drexler’s theoretical work on “programmable” molecules foretells a revolution in technology. His work anticipates applications nearly everywhere, from cryonics to data storage and biological programming, to micro-manufacturing and artificial intelligence design.

McCray illuminates a late 20th century intellectual revolution whose repercussions are still felt today and highlights parallels with our current era. The end of the shuttle program, concerns over dwindling oil and coal reserves, climate change, and rapid social transformation worldwide may have readers ready to join the author in looking forward to a new wave of visioneers to introduce us to fresh worlds of possibility.