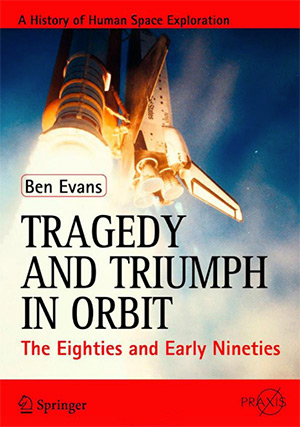 If you have been waiting for Ben Evans’ next book in the series, ‘A History of Human Space Exploration’, you are in for a treat. In his fourth volume, Tragedy And Triumph In Orbit: The Eighties and Early Nineties, Evans has continued his monumental achievement in describing the epic adventure of humanity’s first steps into the cosmos. The narrative begins where the last volume finished, at the conclusion of the Space Transportation System orbital flight test process.

STS-5 launched on November 11, 1982 commanded by Vance Brand. With his crew of Bob Overmeyer, Bill Lenoir, and Joe Allen they released two commercial satellites, the first ever from the Space Shuttle. Columbia landed at Edwards Air Force Base on November 16, 1982 at 6:33:26 Pacific Standard Time.

Of all the exciting missions recounted by the author, STS-41B can be remembered for several achievements. Many readers will recall the historic test flight of the manned maneuvering unit as Bruce McCandless became the first free flying human satellite. One of the most stunning and inspiring pictures of the space age is reproduced in full color as McCandless appears to float above the cloud covered Earth, photographed from the Shuttle while they circled the world in unison. At the conclusion of the mission, Commander Vance Brand guided Challenger to the first Shuttle landing at Kennedy Space Center on February 11, 1984.

Historic and breathtaking missions abound in this book. Evans recounts each flight in detail including the first retrieval and repair of a satellite in space. In April 1984 the crew of STS 41-C fixed Solar Max, the solar physics platform, and released it to continue its scientific discoveries from orbit.

Flying up to eight astronauts began to look routine as mission specialists, payload specialists, foreign astronauts, a senator, a congressman, a prince and finally a teacher were launched aboard the Space Shuttle. This period of great success and some overconfidence led to the loss of Challenger and its crew. Seventy four seconds into flight, just after the call to ‘go at throttle up’, the Shuttle exploded. The author analyzes the details of the accident and the solid rocket booster that caused it. He also explains the effect of the disaster on the American space program and the entire nation.

Evans offers unique insights into crew dynamics and the astronaut psyche. When U.S. Senator Jake Garn flew on STS-51D in April 1985 he got so space sick he became the measure for the ailment. Bob Stevenson described that, “he represents the maximum level of space sickness that anyone can ever attain… and so the mark of being totally sick and totally incompetent is ‘One Garn’. Most guys will get maybe a tenth [of a] Garn.”

During this era of human space exploration the Soviet Union was not standing still. In April 1982 the Salyut 7 space station was launched into orbit on a Proton rocket. It was followed on May 14, 1982 by Soyuz T-5 with its crew who put the station into service. Salyut 7 was visited successfully by nine Soyuz crews with several long duration stays. The longest mission was completed on October 2, 1984 by Leonid Kizim, Vladimir Solovyov, and Oleg Atkov after a record 236 days in space,

The author recounts the dramatic near disaster that visited the Soviet program in September 1983 as Soyuz T-10A sat on the pad ready to launch for a rendezvous with Salyut 7. A fire erupted from a broken fuel valve. Then, as flames engulfed the rocket, the escape tower activated, lifting the capsule away in a high G accent just seconds before the booster exploded. The crew of Vladimir Titov and Gennadi Strekalov landed safely four kilometers away.

The Mir space station was launched on February 20, 1986. Evans describes the amazing and unforgettable mission of its first crew, Soyuz T-15, launched on March 13, 1986. After docking with Mir, Leonin Kizim and Vladimir Solovyov spent 51 days working on Mir. On May 5, 1986 they left Mir in their Soyuz to rendezvous and dock with the Salyut 7 outpost. The two men completed many experiments and performed two EVA’s while aboard Salyut 7. On June 26, 1986 the crew loaded with experiment samples, cameras, and other equipment departed on Soyuz T-15 and returned to Mir. They spent twenty more days on Mir and completed their 125 day mission with a landing in Kazakhstan on July 16, 1986. Salyut 7 was boosted into a higher orbit but was never visited again. It made an uncontrolled re-entry on February 7, 1991 scattering debris over lightly populated areas of Argentina.

The Russians continued their successful program with the addition of the Kvant astrophysics module to the Mir complex in March 1987. This allowed the crew to make the first ever X-ray observations of Supernova 1987A.

As Soyuz crews continued to visit Mir, several foreign cosmonauts came aboard including the first Afghan who flew even while Soviet troops were still in Afghanistan.

Long duration missions remained a priority, and Russian cosmonauts set several space endurance records. They were all surpassed when Vladimir Titov and Musa Manarov achieved the new mark of 365 days 22 hours 38 minutes at Mir before landing on December, 21 1988.

The Space Shuttle returned to flight on September 29, 1988 as Rick Hauck commanded Discovery on a mission to deploy the TDRS-C payload. It seemed that the program was back to business as usual. Although, on the very next flight, Atlantis suffered damage to its thermal protection system from debris strike during launch. Atlantis landed safely, but engineers were stunned when they surveyed the damage. The belly of the orbiter had 707 damaged tiles, from the nose to just short of the wing leading edge. NASA had barely avoided total destruction, but continued to fly without major analysis or changes to the system. NASA accepted the risk since the problem had not yet caused a total failure. They returned to a pre-Challenger mindset that astronaut Mike Mullane called the ‘normalization of deviance’.  In retrospect this near miss would foretell the cause of the Columbia disaster.

The United States closed out the decade in glorious fashion with Shuttle flights to send the Magellan probe to Venus, the Galileo probe to Jupiter, and the incomparable Hubble Space Telescope to Earth orbit. All were released from the Shuttle payload bay and ventured on to many amazing discoveries.

Ben Evans has once again authored a complete history of human space flight, through the eighties and early nineties. This fourth volume, in a planned six book series, covers each mission in careful detail and highlights the exciting accomplishments of each flight. He adds great value to the description of each mission by providing comprehensive biographies of each crew member. The life stories are woven into the description of each flight which helps the reader reflect on the amazing accomplishments of the daring explorers. He further connects the effects of world politics and social events of the time to the American and Soviet space programs.

If you think the 1980’s was a time of boring trips to Earth orbit and back, you may be missing out on many incredible missions. In Tragedy and Triumph in Orbit, Ben Evans continues his epic history of human space exploration and presents these missions in a light that allows one to see how truly breathtaking these adventures were.