Book Review: We Are the Martians 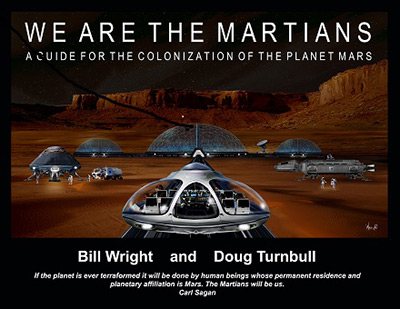 This book, extensively illustrated with beautiful original art by Bill Wright, explores Mars with a primary focus on the issues surrounding its future settlement. NSS members may notice that the chapters resemble some of our Ad Astra magazine articles, with details about current knowledge as well as future speculation on a wide range of topics. The appendix includes a glossary of science terms as well as references to online articles about almost all of the book’s subjects. Although scientific in nature, the book is written so that non-technical individuals interested in space can enjoy it.

The book starts with a brief introduction to Mars through history, including Schiaparelli’s 1888 map, but quickly moves to cover more recent developments, such as what we’ve learned from our robotic exploration probes. It explains transfer orbits between Earth and Mars and the time it would take for a human mission. This short section concludes with the many ideas put forth for humans reaching the Red Planet, such as Dennis Tito’s proposed human flyby and free-return of 501 days, Elon Musk’s statements around building a colony transport system, von Braun’s concept of a Mars mission, and Zubrin’s Mars Direct proposal.

The rest of the book assumes the issues around humans reaching and landing on Mars are solved, and addresses  what a  settlement would look like. It describes some of the basic abodes we may use, such as the tuna can style habitats currently simulated at multiple “Mars analog” sites in remote Earth locations, or bases similar to the Antarctic McMurdo station. But then it states that these types of buildings may be only temporary solutions—there are more advanced techniques available for housing future residents. These include placing buildings in trenches with regolith piled over them for shielding, or placing them inside lava tubes. Illustrations of robot builders are interspersed with all of the explanations, including depictions of remote control of the construction by people on-site, resident in orbit, and located on the Martian moon Phobos.

After covering how a Mars outpost may be built, the authors tackle the myriad issues around providing food, air, water, and energy for the settlers. Besides covering the basics, such as using hydroponics for food production, they explore more interesting alternatives. These include aquaponics (where the waste from farmed fish provides nutrients for plants), and more futuristic ideas like 3-D printing and meat replication from stem cells. For air, this section mentions that providing an Earth-like atmosphere may be difficult, since for that the habitats would need large amounts of nitrogen, which is unavailable. The only solution provided is that nitrogen may be trapped in minerals formed during an early Mars epoch, and thus mined.

The book spends a chapter on crew makeup, including their personality traits and professions (e.g. engineers, scientists, technicians and miners). It also touches on childbearing and rearing issues, and the fame that would surround the first person born on Mars. I was a bit disappointed, however, when the book covered options for funding and running the settlement. It mostly lists the alternatives, such as being run by NASA, multiple countries, corporations, or non-profits, and only mentions some of the alternative funding methods like “exotic” exports and product endorsements.

Assuming the settlement grows, the book covers later Mars exploration and transport by using rovers, hoppers, blimps, and gliders. It also mentions that tourists may visit via ion or plasma propulsion, solar sails, and cyclers.

The final section explores life at the settlement through the eyes of a fictional architect who designs subways on Earth. He is asked to come to Mars to connect the multiple, expanding domes via an underground transportation system. As he takes his three children and wife along on the trip, they each describe their experiences flying on the Copernicus spaceship, docking at a Mars transit spaceport, and shuttling down and touring the domes. This section, along with its illustrations, reminded me of an early Disneyworld ride I took that depicted a happy family living and working on Mars. The story ends with everyone having such an enjoyable time, they wonder whether they’ll stay after the job completes, or return to Earth.

As a long-time NSS member, I was familiar with most of the information presented, but I enjoyed the extensive pictures, detailed illustrations and positive overall message. This book would most likely be best appreciated by someone new to the issues of building a thriving settlement on Mars and wishing an overview of what it might entail.