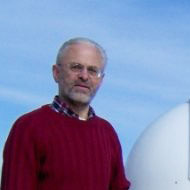 Bruce Mackenzie advocates low tech “homesteading” to live on Mars.  He originated the concept of Masonry structures on Mars, using regolith (dirt) to hold the internal pressure.  Bruce has been active in the National Space Society since the merger with the L5 Society. He served multiple terms on the NSS Board of Directors, chapters committee, local chapter, multiple  chapters web support, and other duties.

Bruce is the founder of the Mars Foundation, an NSS affiliated organization, dedicated to education and research on settlement of Mars. His special interest is the use of in-situ materials, such as production of plastic and masonry from the Martian air and dirt, to build habitats and 3D printing for Mars Settlement.

But, the most fun were:

Bruce lives near Boston, USA, with his spouse, they have 2 grown children