Carrying the Ire: The Most WTF Spaceflight Books 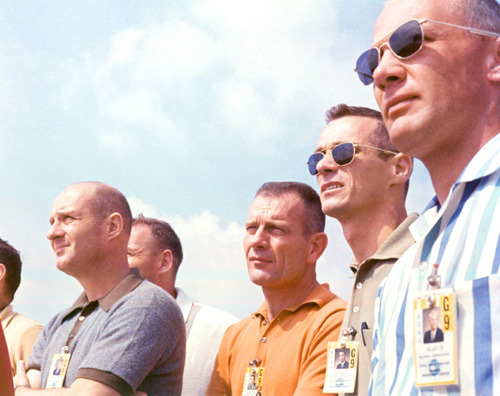 Slayton: “Guys, if you can’t play nice together, WE WILL GO BACK INSIDE DAMMIT.” From left, Thomas Stafford, Deke Slayton, Gene Cernan and Buzz Aldrin try to keep the peace, 1966.
I suppose this is the beginning of what will become a long series of posts, because there are a ton of nutty spaceflight-related books floating around (so to speak) in the ether. Today, I’ll focus on Buzz Aldrin’s Return to Earth (1973) and Gene Cernan’s Last Man on the Moon (1999).
First, I’ll focus on Last Man on the Moon, because I’m going to save the best for last. Last Man on the Moon (titled because, well, Gene happened to be the last man on the moon) certainly has its share of crazy moments. Perhaps the best sections involve Gene’s not-entirely-irrational, VERY PUBLIC hatred of astro-colleague and Group Three alumnus Buzz Aldrin. He begins the book with a (sort of) heart-warming reminiscence about his late buddy Roger Chaffee blatantly trolling Ol’ Dr. Buzz with a “broomstick trick” (an athletic feat of insane proportions…you’d have to read the book to understand) and Buzz stomping off in a huff about this. (In retrospect, it’s not hard to imagine Roger doing this. He always had a mischievous twinkle in his eye.)
Buzz regularly gets the stick in more than one way in Last Man on the Moon. We hear in great depth about Buzz trolling Gene to an annoying degree around the time of Gemini 9 over extracurricular activities (Gene had a difficult EVA during that mission, which is chronicled in terrifying detail). We also hear about Buzz’s unsurprising, bombastic efforts to be the first man on the moon, an honor which went to the rather quiet, unassuming Group Two astronaut Neil Armstrong. Gene’s complete lack of tact in discussing Buzz’s, um, craziness is pretty hilarious. There are other vignettes in the book which are worth discussing, such as the time Gene accidentally on purpose crashed a helicopter (????) and the time Gene got in deep doo-doo over throwing around cusses on Snoopy, Apollo 10’s LEM. He also refers to Alan Shepard as a “sumbitch” (well, Big Al was kind of a sumbitch, at times) and recounts a lovely time in which he was cussed out by Tom Stafford. Yikes. There are more cusses in Last Man on the Moon than most gangsta rap albums made around the same time. If you need some hearty giggles in your spaceflight books, sans cuteness (because 2008’s Homesteading Space: The Story of Skylab will MAKE YOU DIE OF CUTE), Gene’s your man.
…BUT THE REAL BIG DADDY OF ALL CRAZY SPACEFLIGHT BOOKS IS BUZZ ALDRIN’S RETURN TO EARTH. This book is the Too Much Damn Information Extravaganza of Spaceflight Books. Really, Buzz gives away ENTIRELY TOO MUCH about his personal life in this one. I do think his decision to go public with his alcoholism and depression issues was – and continues to be – a brave one. However, Buzz cushions the noble message of his first stab at an autobiographical sketch with the craziest stories you can ever imagine. I believe he had his first sexual encounter with a Juarez hooker (I DID NOT MAKE THIS UP. He wrote this!) and he recounts the experience of being the first man to take a piss while he was standing upon the moon’s surface in excruciating detail. He also buys a monkey named Popo just for the lolz (seriously, he went out and bought a monkey, because he just wanted one). To this day NO ONE knows why the monkey was named Popo. The monkey, last I checked, was not available for comment.
At any rate, Buzz Aldrin’s Return to Earth remains the gold standard for slightly inappropriate astronaut memoirs. Neil may have been the first man on the moon, but Buzz was arguably the first astronaut on the moon who gave zero shits about anything at all. He probably ate more unauthorized sandwiches and took more dumps than John Young ever did. And that’s my last word on that subject.