The National Space Society celebrates the life and contributions of the visionary champion of space exploration, Honorable Senator John Glenn, who passed away today.

“John Glenn was an inspiration for the National Space Society and all those who believe humanity’s destiny lies in the stars,” said Mark Hopkins, Chairman of the Executive Committee of NSS.

Hugh Downs, NSS Board of Governors Chair, said, “It was an honor to work with John Glenn as a member of the NSS Board of Governors. John had the courage of his convictions based on his knowledge of science. He did not fall for the myths that surrounded the medical risks of human space travel at the time. His understanding of the science was as important as his getting into the capsule and orbiting the Earth. It is hard to imagine today how important that was for the the U.S. at the time.” 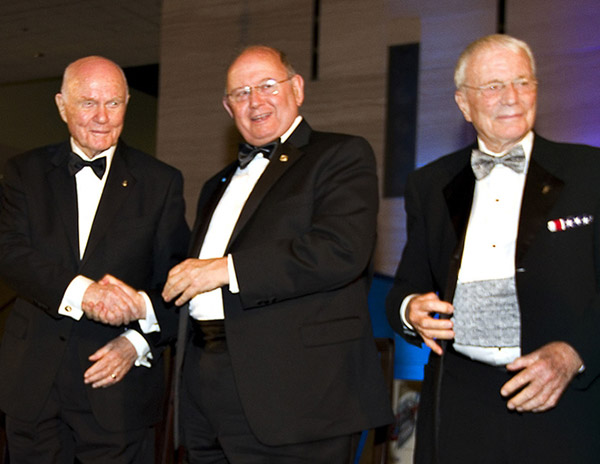 NSS Governors John Glenn and Art Dula, along with Scott Carpenter at ISDC 2012 in Washington, DC

John H. Glenn was born on July 18, 1921, in Cambridge, Ohio. Following graduation from New Concord High School, Mr. Glenn enrolled in Muskingum College and began flying lessons at the New Philadelphia airport, earning his pilot’s license in 1941. He left college before earning his degree (he was awarded a bachelor of science in engineering from Muskingum in 1962) and enlisted in the Naval Aviation Cadet Program. He was commissioned in the Marine Corps in 1943. During his World War II service, Mr. Glenn flew 59 combat missions in the South Pacific.

During the Korean conflict, he flew 63 missions with Marine Fighter Squadron 311 and 27 missions as an exchange pilot with the Air Force. He holds the Air Medal with 18 Clusters for his combat service and has been awarded the Distinguished Flying Cross on six occasions. He is the recipient of numerous other honors, including the Congressional Space Medal of Honor.

In 1959, he was selected to be one of seven NASA Mercury astronauts from an original pool of 508. Three years later, on February 20, 1962, he made history as the first American to orbit the Earth, completing three orbits in a five-hour flight and returning to a hero’s welcome.

After his NASA service, John took an active part in Democratic politics and early environmental protection efforts in Ohio. In 1974, he was elected to the U.S. Senate. Senator Glenn retired in 1998. 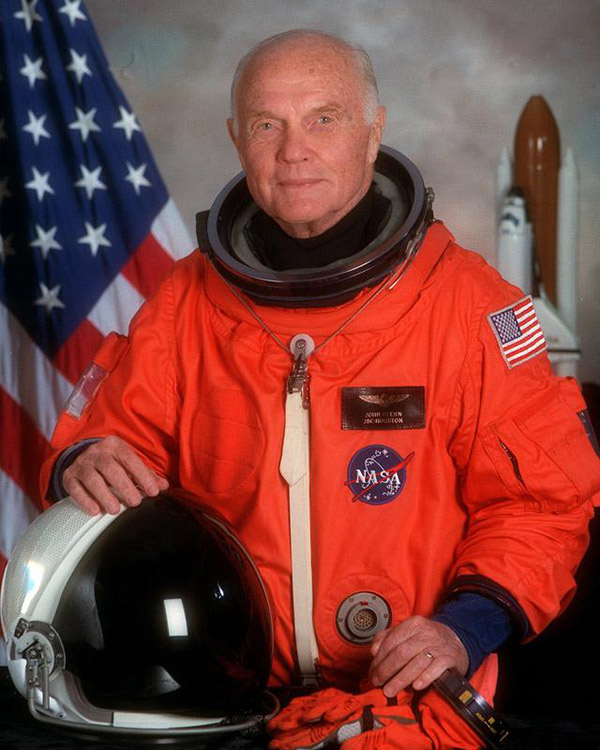 Mr. Glenn returned to space from Oct. 29 to Nov. 7, 1998, as a member of NASA’s Shuttle STS-95 Discovery mission during which the crew supported a variety of research payloads and investigations on space flight and aging. During that mission, Mr. Glenn made 134 Earth orbits in 213 hours and 44 minutes.

Mr. Glenn has been married to Anna (Annie) Margaret Castor since 1943. They have a son, Dave, and a daughter, Lyn, and two grandchildren.