Distant Skyline: A Vision for What’s Beyond ISS 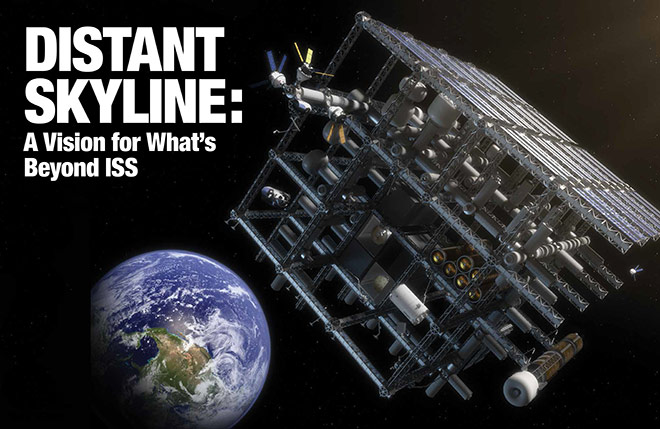 The ghost of Apollo haunts NASA, 40 years on. Apollo’s half-brother Mars taunts NASA for its limitations while the agency tries to marshal the technology to overcome them on budgets that would not lace Apollo’s sandals. Still, Apollo’s ghost whispers from deep space that there must be another adventure out there. Perhaps the Moon again; perhaps an asteroid; perhaps….

While the Space Age generation pines for “the next Apollo,” the Information Age generation looks for “the next Apple” to change their lives and involve them personally in the adventure. Space entrepreneurs are trying to fuse these generational passions, but they are coming to understand that a commercial business model does not diminish the challenges of operating in space. The enduring facts of space—Earth’s deep gravity well, the rocket equation, the remote and hostile environment—eventually douse vision in realism.

Yet the vision of opening space to entrepreneurial ventures is worthy, even if it would not be an Apollo-like adventure of exploration. NASA’s decades of investment in Earth orbital space, especially the recent success of ISS, have demonstrated convincingly that the technology to exploit space for human benefit and the challenges to engineering and operations are manageable. But the absence of space commerce demonstrates just as convincingly that the business case for space-based businesses and the challenges to return on investment are not yet manageable.

Orbital space does offer at least one high-value market for entrepreneurs: satellite servicing. NASA is demonstrating technology to refuel, relocate, and repair satellites such as high-value telecom and national security assets in geosynchronous orbit. Commercial satellite servicing could be put to work as soon as the capability is available. But converting this market and capability into a business may require more capital, investment patience, and risk tolerance than investors have.

NASA’s charter requires it to “seek and encourage, to the maximum extent possible, the fullest commercial use of space.” The Agency’s programs supporting commercial transportation are steps in that direction, but the cost challenges to orbital business don’t end on arrival in low Earth orbit. Space is hostile to commerce because space is hostile. There is no welcoming infrastructure where a business can plug into power, connect up a coax, set out its capital equipment, and start doing business with near-space neighbors. It is within NASA’s ability and charter to establish a place in orbit with this kind of infrastructure. The time is right to do so.

A Place in Space

NASA could establish a site in space with infrastructure that would lower the barrier to entry for the satellite servicing market and other commercial and governmental uses. It could accommodate a depot for parts and tools to support satellite servicers. It could be the high-altitude terminal for transports coming from Earth and the low-altitude terminal for ferries to high orbits. A company based there could provide fuel for the ferries and propellant for satellites, or even manufacture them in situ using energy from the Sun and easily transported liquids like water or ammonia. An orbital location with infrastructure could bring many innovative entrepreneurial possibilities within reach.

NASA could design the facility to grow beyond its original purposes. It could become a place to assemble and check out NASA’s deep-space exploration craft. The national security community might take advantage of its location to monitor activities in synchronous orbit. New technology and designs could be flight-tested there. It could be a site for astronomical instruments, a radiation research facility, or a power station to beam power to customers in orbit. Such a multifunctional center could grow into a city in space.

Cities on Earth thrive exactly because they concentrate resources and markets efficiently. In space, similar efficiency would be expected from an oriented platform at a known location with infrastructural resources such as power, communication, structural attachment, and waste management. Concentrating markets would stimulate business-to-business commerce so that a company could focus on its own challenges and buy services from other businesses. Such urban advantages could change the cost-benefit calculus enough to stimulate innovative robotic and human space-based activities by commercial and governmental entities.

A city in space would begin where ISS has brought us. It would be constructed of modules and nodes that are independently launched, and it would take advantage of the valuable experience gained on ISS. NASA could take the opportunity, which it might otherwise not have, to capture and update the lessons learned from the taxpayers’ investments in the shuttle and ISS by developing them into engineering standards and operational practices for this next step in the development of space.

PISCES: A Step Beyond

The next step beyond ISS would be very different. The acronym PISCES captures its essential features. It would be a Permanent In-Space Center for Expandable Services.

Unlike ISS, PISCES would be designed from the beginning to be permanent. It would be located well above the traces of atmospheric drag in low orbit to minimize the need to reboost it. It would be designed to be remotely repaired, serviced, and upgraded to extend its useful life indefinitely. Its modules and nodes would incorporate features that would allow them to be removed and replaced if warranted in the future.

PISCES’ exact in-space location, orbital altitude, and inclination would be determined by considering foreseeable uses. Presuming that servicing high-orbit satellites is among its early priorities, a relatively high, equatorial orbit may be appropriate. The location might make human habitation impractical until the technology for radiation protection matures.

PISCES would be a center that welcomes multiple, indefinite uses and users, the way a city does. Users would build or lease their own mission modules and operate them at their own cost.

Unlike ISS, PISCES would be indefinitely expandable. Its modular configuration would have a crystal-like architecture that would always have active nodes where new modules could connect to standard interfaces. Utilities like power and cooling would also be modular, allowing them to grow as demand does.

PISCES would be a focus for supplying services. Users would purchase utilities from the city through regulated monopolies like those in a terrestrial city, and they would obtain specialized services like repair, maintenance, and citywide parcel delivery from local companies.

NASA has both the charter and the expertise to found PISCES City, but NASA should not operate it indefinitely. Once it has demonstrated the assembly and operations, NASA should turn over routine operation to a municipal authority. It would then use PISCES like any other tenant to support future scientific and exploration missions. Operation of the city would be funded by taxes on users with the goal of becoming self-sustaining. PISCES tenants would have a democratic voice in governing the city.

This transition would be planned from the beginning. During the engineering development of the city, NASA could elicit help from political scientists to write a city charter, municipal experts to structure city functions, and chambers of commerce to advise on matters of business so that NASA could relinquish operational responsibility as soon as PISCES was ready.

The value of PISCES would need no esoteric explanation to the public or policy-makers. It would be the tangible, durable culmination of the public’s investment in NASA over the decades. And it could kick off an era of space commerce with the same potential for open-ended growth that came from government investment in aviation infrastructure and the internet.

PISCES doesn’t demand novel technology. The enabling architecture, engineering standards, and deployment operations are within easy reach. Robotic servicing technology is maturing rapidly and should be available in a realistic PISCES timeframe. Although human habitation may have to wait until radiation protection technology matures, many early uses would not require it.

Beyond its urban efficiencies, PISCES’ modular paradigm would help reduce the cost and improve the reliability of space systems. Modules would be funded through multiple streams from NASA, commercial, and national security users at times and in amounts directed by their opportunities.

PISCES could involve people beyond the traditional space community. Municipal experts and even interested amateurs could help envision its possibilities. Companies, investors, and shareholders could share in its opportunities. Engineers and technicians in many disciplines would find challenging employment. The technology for remote operation would produce spin-offs on Earth.

Between Apollo and Mars

Under the goading of Apollo’s ghost, NASA has focused its visionary imagination on exploration adventures in deep space. Until such adventures become technologically and fiscally feasible, PISCES could provide a realistic, post-ISS focus for NASA’s ingenuity. In fact, PISCES could accelerate that day when we’ll be ready for an Apollo-like adventure by providing a base of operation in space and a cost-effective place to mature needed technology.

The PISCES vision is inherently open-ended. We cannot know what use future generations would make of a space city any more than the inventors of the internet could foresee the uses of their effort. Our age in time has handed us the opportunity to begin to find out.

Doris Hamill is a business development manager at NASA Langley Research Center. The views and opinions expressed in this article are those of Doris Hamill, and do not necessarily state or reflect those of NASA or the United States Government.