The National Space Society’s prestigious Wernher von Braun Memorial Award will be presented to Dr. Abdul Kalam on Friday, May 24 at the 2013 International Space Development Conference (ISDC). Held at the Hyatt Regency La Jolla at Aventine Hotel in San Diego, CA, the ISDC will run from May 23-27, 2013.

Dr. Kalam will receive the award and be the Keynote speaker during Friday’s Gala and Governors Dinner, speaking on the subject SPACE SOLAR POWER: KEY TO A LIVEABLE PLANET EARTH. The National Space Society is honoring Dr. Kalam for his long-time work in and support of India’s space program, and his support for space development. Dr. Kalam’s life’s work parallels that of Dr. Wernher von Braun in many ways. India first developed rockets for military use, but Kalam, like von Braun, has been in the forefront of “turning missiles into space launch vehicles.” Gala tickets to hear Dr. Kalam’s keynote are available through the ISDC website.

India is now one of the world leaders in space research. In particular, NSS appreciates Dr. Kalam’s steadfast support for space based solar power, which is attracting attention as a potential major global energy and electricity source. An entire track at ISDC 2013 will highlight space solar power developments and initiatives. 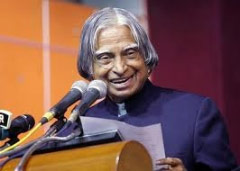 About Dr. Abdul Kalam: Dr. Kalam was born in 1931 and raised in Rameswaram in the state of Tamil Nadu. He studied physics at St. Joseph’s College in Tiruchirappalli, and aerospace engineering at the Madras Institute of Technology (India’s MIT), in Chennai. Before his term as President, he worked as an aerospace engineer with India’s Defense Research and Development Organization and the Indian Space Research Organization. In his book, India 2020, Dr. Kalam advocated plans to foster India’s growth into a developed nation by 2020. He has also been involved in development of a coronary stent and a rugged tablet PC for use in rural areas.

After his term as 11th President of India (2002-2007), he continued to promote practical initiatives in space and on the ground. His work with students is especially important to India’s future. His support of both the Indian space program and specific space policies and agendas in the global sense, such as re-usable and advanced space launch systems, is rational, practical, and helps advance mankind’s unlimited future in space. Read more about Dr. Kalam at his web site.

About the Wernher von Braun Memorial Award: This award is given in odd-numbered years to recognize excellence in management of and leadership for a space-related project where the project is significant and successful and the manager has the loyalty of a strong team that he or she has created. The award was originally proposed in 1992 by National Space Society Awards Committee member Frederick I. Ordway III, a close associate of and co-author with Wernher von Braun. More information about the von Braun Award and past recipients can be found on the NSS Awards page.