ESCANDALO in Space, Part V: When Bumping Uglies On Moon Rocks Was A Thing 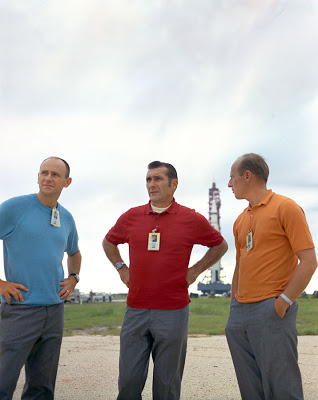 Here’s a cute picture of Apollo 12, because you’re going to need a palate cleanser after reading this blog post. I apologize in advance. 1969 NASA photo.
I don’t even know where to start with this story, so I’ll just tell it bluntly. In 2002, a 25-year-old astrophysicist named Thad Roberts was interning at NASA’s Johnson Space Center. Apparently he was in love with some chick, and promised her the Moon. No, really, he promised her actual pieces of the Moon from the Moon’s surface. Love is a funny thing!…
Moving on…Roberts ended up stealing 17 pounds of moon rocks from NASA. I have no idea how or why he really did this. I mean, I’ve been in love too, and if my wonderful husband told me to go steal the space shuttle Enterprise to “prove my love” to him, I’d probably tell him to go kiss my ass. But anyways, this guy went through with his promise. For being an allegedly smart dude (I mean, the guy is an astrophysicist – that must mean something), Roberts then proceeded to do something really dumb. He decided to sell the stolen moon rocks on the Internet, the World’s Biggest Online Public Playground. Yeah…big oops.
Logic would dictate to most people that possessing moon rocks is probably more illegal than smoking crack cocaine in public. (In all seriousness, we at This Space Available do not endorse stealing any items from government facilities.) However, Roberts wasn’t most people, and he decided this whole scenario was a badass idea! The government (SHOCKER) did NOT agree with Roberts’ opinion. Roberts was caught, and he was understandably sentenced to 100 months in prison for stealing federal property and attempting to sell said property.
While he was incarcerated, Roberts wrote a 700 page thesis called the Quantum Space Theory, which is probably more verbose and incomprehensible than anything ever cooked up by Lady Gaga. But what Roberts really wants us to know is that he made it rain on dat ass…on moon rocks. That’s right. Roberts apparently, for lack of a better description, had sex with his girlfriend on a bed full of stolen moon rocks. This incident reminds me of why social networking, while being a fantastic thing, also allows people to give away wayyyyyyy too much information about their personal lives at times.
To read more about Thad Roberts and his crimes of the heart, check out this link and that link.