ESCANDALO in Space: The Apollo 15 Stamp Incident of 1971 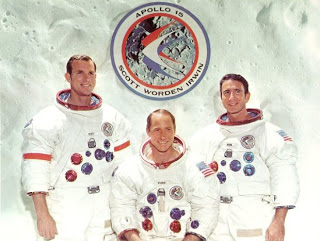 The crew of Apollo 15, from left: Dave Scott, Al Worden, and Jim Irwin. 1971 NASA photo.
After the successful, seminal moon missions in 1969/1970, “authentic” space memorabilia became more desirable and popular than ever. Imagine it’s 1971 and you’re drinking Old English malt liquor. You know you want a lunar mission postcard. And even better, this postcard is imbued with lunar dust from actually being on the moon’s surface. You see, its postage stamp has been to the moon itself, baby. Well, some very enterprising NASA astronauts had the same idea, sort of.
In 1970, the Apollo 15 astronauts – Jim Irwin, David Scott, and Al Worden – were contacted by a memorabilia dealer named Walter Eierman, who was in turn connected to a German stamp dealer named Hermann Sieger. In exchange for the rather paltry sum of $7,000 individually in Swiss bank accounts, the Apollo 15 astronauts agreed – in secret – to carry a large number of the Sieger stamp covers into space. These covers ended up being sneakily hidden in the astronauts’ spacesuit pockets, as NASA technicians had to inventory every item going into and out from the spacecraft.
When the crew of Apollo 15 came back from their successful summer 1971 mission, they returned the stamp covers to Sieger, and thought nothing more of what had transpired.
Unfortunately for Irwin, Scott, and Worden, Sieger got trigger-happy, and began to sell the stamp covers in Europe for a $1,500 a piece. Soon authorities from the United States got wind of what had been going on. The remainder of the stamp covers were confiscated, and the crew ended up forfeiting their career-ending sums of $7,000 a piece. All three men were also suspended from flight status. All astronauts were forced to sign an agreement that they would never take memorabilia for profit into space.
The person who REALLY got screwed in this entire deal wasn’t even present on Apollo 15. Jack Swigert – the famously swinging bachelor astronaut who almost kicked the bucket on Apollo 13, and somehow managed to bring its crippled command module back to Earth – was apparently interviewed about the practice of sending random items into space for profit by government investigators. Jack was all like “Hahahahaha, NOPE” to the investigators; this caused a fall-out between himself and the venerable head of the Astronaut Office, Donald “Deke” Slayton. As a result, Swigert was also removed from flight status. It was rumored that Swigert was meant to fly on the Apollo-Soyuz mission of 1975; Deke himself ended up taking his spot. Swigert never again flew into space. He ended up leaving NASA some years later.

In retrospect, the Apollo 15 stamp incident probably is the least scandalous “scandal” ever. Yeah, the crew of Apollo 15 were ill-advised to accept merely $7,000 each in exchange for their careers, but it wasn’t like any of them committed kidnapping and attempted murder. This particular scandal wouldn’t hit NASA for over another thirty years…

EDIT, APRIL 2013: Please read Al Worden’s Falling to Earth (reviewed here) for the full story about what really happened with this scandal. It’s an excellent read.