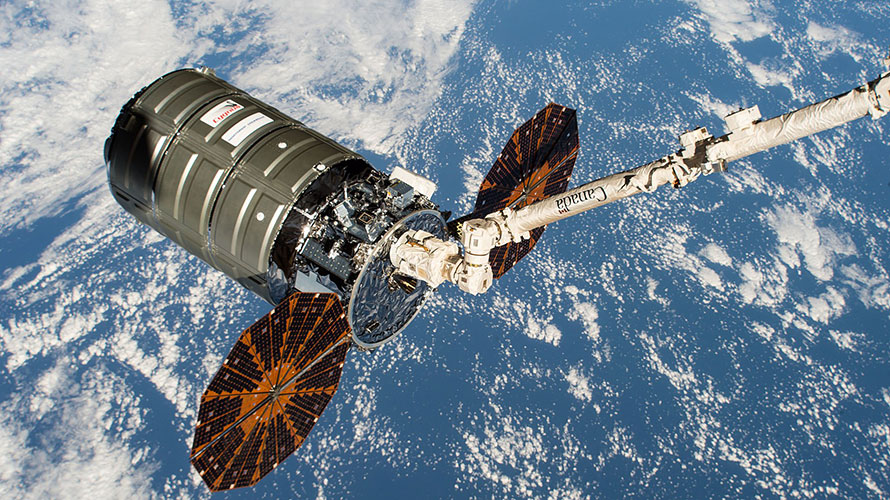 By Dale Skran, NSS Chair of the Executive Committee

On April 17th the final Cargo Resupply Services 1 mission to the ISS soared off the pad at 4:46 EDT from the Mid-Atlantic Regional Spaceport on Wallops Island, Virginia. The NG-11 (Northrup Grumman 11) flight will achieve a variety of firsts, including:

Designated the S.S. Roger Chafee, Cygnus is jammed with 7,600 lbs of cargo, making it the heaviest Cygnus/Antares launch yet.  Late cargo load is a key requirement of the CRS-2 contract that starts in the fall. After the Cygnus detaches from the Antares second stage, the deployment of 61 cubesats will follow. This cargo consists of 60 Thinsats for the Virginia Commercial Space Authority, and one NASA sponsored 3U student cubesat. The Thinsats are DVD-sized student experiments.

The new Control Moment Gyro (CMG) allows Cygnus to maintain its attitude without using thrusters, allowing the support of a post-ISS orbital stay of months. Not only will NG-11 allow the CMG to be tested, when NG-12 launches in the Fall it will allow the demonstration of the simultaneous operation of multiple Cygnus vehicles in orbit at the same time.

Although not planned to be demonstrated with NG-11, the goal for Cygnus as a free flyer is to allow eventually for Cygnus to return to the ISS with a load of experiments or manufactured product that could then be returned to Earth via a Dragon 2 or Dreamliner. The lack of an uncrewed free flyer large enough to support experiments or manufacturing has long held back space development. Now, for the first time, we stand on the brink of this important capability being a reality. Congratulations are due the original Orbital team for creating Cygnus/Antares, and for Northrup Grumman in continuing to support the vehicles after their acquisition of Orbital ATK.