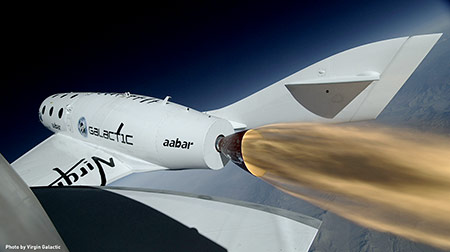 “The first powered flight of Virgin Spaceship Enterprise was without any doubt, our single most important flight test to date,” said Virgin Galactic Founder Sir Richard Branson, who was on the ground in Mojave to witness the occasion. “For the first time, we were able to prove the key components of the system, fully integrated and in flight. Today’s supersonic success opens the way for a rapid expansion of the spaceship’s powered flight envelope, with a very realistic goal of full space flight by the year’s end. We saw history in the making today and I couldn’t be more proud of everyone involved.”

The test began at 7.02am local time when SS2 took off from Mojave Air and Space Port mated to WhiteKnightTwo (WK2), Virgin Galactic’s carrier aircraft. Piloting SS2 were Mark Stucky, pilot, and Mike Alsbury, co-pilot, who are test pilots for Scaled, which built SS2 for Virgin Galactic. At the WK2 controls were Virgin Galactic’s Chief Pilot Dave Mackay, assisted by Clint Nichols and Brian Maisler, co-pilot and flight test engineer, respectively, for Scaled.

Upon reaching 47,000 feet altitude and approximately 45 minutes into the flight, SS2 was released from WK2. After cross-checking data and verifying stable control, the pilots triggered ignition of the rocket motor, causing the main oxidizer valve to open and igniters to fire within the fuel case. At this point, SS2 was propelled forward and upward to a maximum altitude of 55,000 feet. The entire engine burn lasted 16 seconds, as planned. During this time, SS2 went supersonic, achieving Mach 1.2.

“We partnered with Virgin Galactic several years ago with the aspiration to transform and commercialize access to space for the broader public,” said His Excellency Khadem Al Qubaisi, Chairman of aabar Investments PJS. “Today’s test is another key milestone in realizing that aspiration. Our partnership goes from strength to strength, and is an excellent example of aabar’s desire to participate in the development of world class technologies that are commercially viable and strategically important, both for the company, its shareholders, and for Abu Dhabi.”

The entire rocket-powered flight test lasted just over 10 minutes, culminating in a smooth landing for SS2 in Mojave at approximately 8am local time.

“The rocket motor ignition went as planned, with the expected burn duration, good engine performance and solid vehicle handling qualities throughout,” said Virgin Galactic President & CEO George Whitesides. “The successful outcome of this test marks a pivotal point for our program. We will now embark on a handful of similar powered flight tests, and then make our first test flight to space.”

In the coming months, the Virgin Galactic and Scaled test team will expand the spaceship’s powered flight envelope culminating in full space flight, which the companies anticipate will take place before the end of 2013.

“I’d like to congratulate the entire team,” said President of Scaled Kevin Mickey. “This milestone has been a long time coming and it’s only through the hard work of the team and the tremendous support of Virgin Galactic that we have been able to witness this important milestone. We look forward to all our upcoming tests and successes.”