For Whom the Bell Tolls: Falcon Heavy Soars (Update) 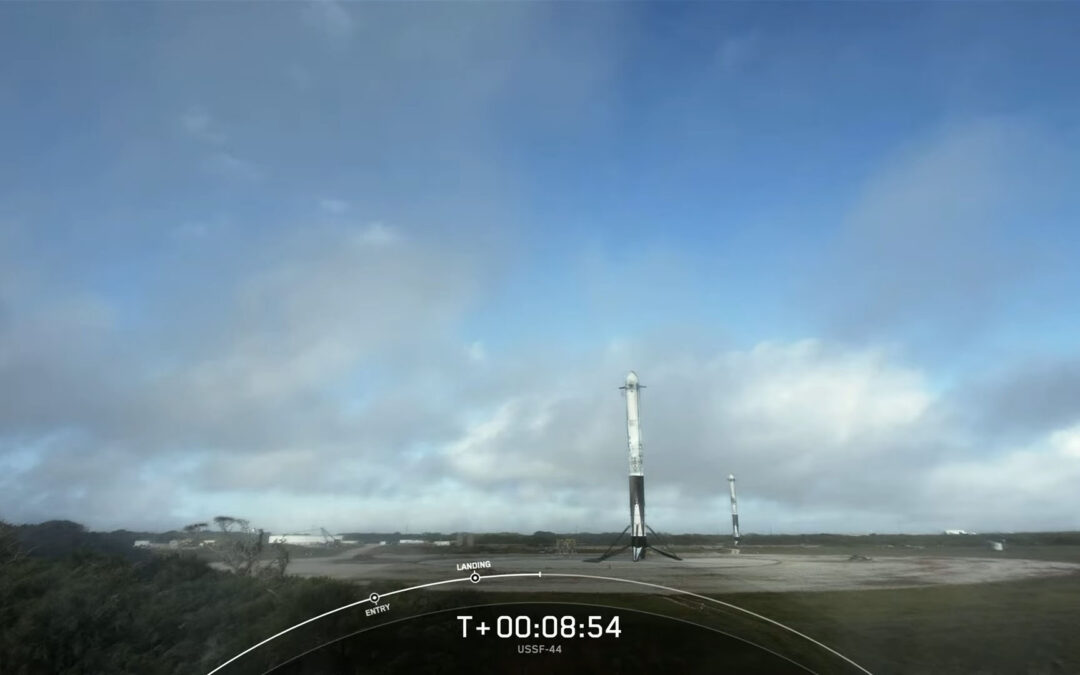 I was planning to write an overall update on the status of the seemingly never-ending cage match “SLS vs all comers” but with an increasing probability that we will have one (or maybe two) Falcon Heavy flights closely followed by Artemis I in November and possibly the first orbital Starship/Superheavy in the same timeframe, it started to seem like just too much for one blog post. Hence, I’ll be doing a kind of running update, starting with the successful November 1st launch of the Falcon Heavy. For the first time in over three years a Falcon Heavy lofted USSF-44, a US Space Force mission with a classified payload to orbit at 9:41 AM EDT from Launch Complex 39A at Kennedy Space Center. This was SpaceX’s first direct to GEO mission, and required expending the Falcon Heavy center core, but both side boosters flew back to Kennedy and landed.

The manifest now looks like (and recalling that we are not counting the first FH flight as it used somewhat different hardware):

The good news is that the Falcon Heavy has been slowly winning more bids, and now has 11 additional confirmed flights manifested from a wide variety of sources. Better news is that by the end of 2024 we ought to see at least ten Falcon Heavy flights, even with some slippage. This projection remains consistent with that in my 2021 “future of the SLS” blog post.

Because of hardware commonality with the Falcon 9, the Falcon Heavy builds on an extensive and growing flight heritage. The second stages of both vehicles are identical, and the first stages share a high degree of commonality. An additional point is that although the Falcon Heavy won’t have ten flights under its belt by the end of 2023, it could have 8, and 8 is pretty close to 10. Assuming all eight are successful, the Falcon Heavy will be in a great position to win bids in 2024 and onward.

As I’ve observed in the past, the best annual SLS launch cadence poses no threat to the Falcon Heavy. The current schedule calls for:

A look at the Starship/Superheavy manifest is called for:

Based on the number of Starships in preparation to launch Starlinks at Boca Chica right now, the above manifest seems certain to just be fraction of the Starship/SuperHeavy flights in 2023/2024/2025. Even the above list plus Starlink launches understates the magnitude of the overall effort since several tanker launches are needed for each Starship that heads to the Moon. Further, there are several test flights planned to support Artemis testing. The obvious conclusion is that by the end of 2024, both the Falcon Heavy and the StarShip/SuperHeavy will have significantly more flight experience than SLS.

SpaceX will soon possess the singular advantage of being able to offer flights on either of Falcon Heavy or Starship, offering dissimilar technology within one company. This allows customers to rely on SpaceX in a fashion that they cannot rely on other vendors which offer only a single heavy-lift solution. A key Falcon Heavy milestone to be looking for is the first flight with vertical integration and the extended fairing, which will increase the range of missions the Falcon Heavy can support.

The tipping point to look for appears to be when NASA starts planning future Moon/Mars flights around Falcon 9/Falcon Heavy/Starship rather than SLS. SLS flights might continue until the Gateway reaches initial operating capability, but 2025 seems like a strong candidate for that tipping point, in part since by then it is reasonable to expect that at least Vulcan has enough flight experience to help out. An additional factor derives from the potential for changes in direction resulting from a new Administration following the November 2024 elections.