From Olduvai Gorge to the Sea of Tranquility 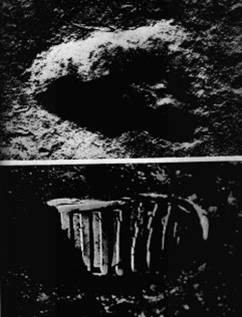 By far the two most remarkable photographs of the twentieth century are the ones shown above. For they encapsulate the whole evolutionary and cultural history of humanity and its possible destiny.

In 1978, paleontogist Mary Leaky and her team discovered the earliest hominid footprints (dated to be three and a half million years old) preserved in the volcanic ash at Laetoli, forty-five kilometers south of Olduvai Gorge in Tanzania. They belong to one of our proto human ancestors – Australopithecus afarensis. The picture above shows one of these fossil footprints next to the boot print left by Neil Armstrong in the volcanic soil of Mare Tranquilitatis (the Sea of Tranquility).

It is very symbolic of the giant evolutionary leap forward we have taken as a species. From Olduvai Gorge to the Sea of Tranquility, we humans have traveled very far.

Exploration has always been vital to the survival of our species and an integral component of our evolutional heritage and survival imperative. The lure and call of distant lands and new horizons is rooted in our very genes.

The descendents of Australopithecus afarensis – Homo Erectus eventually migrated out of Africa some two million years ago and were to disperse throughout the old World. This was the first of four major waves of human migration from Africa culminating in the last major migration some sixty thousand years ago of fully modern humans (Homo sapiens, sapiens).

Since April 2005 through the efforts of Dr. Spencer Welles and the National Geographic Society’s Genographic Project we have begun to map out the migratory story of the human Diaspora out of Africa out onto a wider global stage. This evolutionary step and the migrations that preceded it were vital to humanity’s long term survival in the face of the vicissitudes of a changing global climate.

Eventually the descendents of this last major migration would spread out from the Old Worlds of Europe and Asia into the New Worlds of the Americas and Australia.

It was during this phase of the human story that we became a planetary species. Eventually we discovered agriculture, built the first cities, developed culture and writing and became the pioneers of a totally new domain of evolution.

We are the pioneers of a whole new form of evolution which is distinctly non-biological. This new realm of evolution is Cultural Evolution. It is this new dominion of evolution that has made us the most dominant life form on this planet and has set us on a trajectory that will one day take us out amongst the stars.

In this epoch of human history we face many dangers both old and new. The past has shown us that many species have been wiped off the evolutionary stage because of catastrophic climatic shifts, super-volcanism and asteroidal bombardment. Our species is no different. Some seventy-five thousand years ago our species barely survived a long volcanic winter triggered by the supereruption of Lake Toba on the island of Sumatra in Indonesia. And, at least one ancient culture – the Clovis people of North America, may have met their demise as a result of the celestial equivalent of a 9/11 event. Some thirteen thousand years ago a comet exploded over North America, wiping out the mega fauna of that continent, and the people who hunted them, off the face of the Earth.

Today we still face the threats of climate change (both natural and anthropogenic), resource depletion and the products of our own technological folly: environmental degradation, resource depletion, total nuclear warfare, and biological terrorism. Our intelligence and the fact that we were disperse globally helped ensure our survival as a species.

Yet, our species is curious, brave and shows much promise. We are graced with a towering intellect that stands poised on its next evolutionary leap that may one day take us beyond the Sea of Tranquility and ensure our long term survival.

Neil Armstrong’s one small step for [a] man was the culmination of the greatest scientific, technological and cultural advance in human history. It was indeed a giant leap for mankind. It proved, beyond any question of doubt, that humankind had taken the first evolutionary stride in becoming a multi-planetary species. The time has now come to venture further out on this vast new ocean of space and to chart humanity’s Diaspora out amongst the stars.

We must return to the Moon, this time to stay. We must learn to utilize the vast untapped energy and mineral treasures of the Moon and the Near Earth Asteroids. We must eventually settle the entire solar system from the planet Mars and out to the edge of the solar system. One day our species will continue its migration out into the Milky Way Galaxy. But, this is very far from being our assured manifest destiny. The choice is entirely ours to make. Humans have labeled their species “Homo sapiens, sapiens” – wise, wise man. The time has now come to use our double measure of wisdom to climb out of planetary cradle and take our evolutionary destiny into our own hands and transform ourselves from Homo sapiens, into Homo Stellaris and find our home among the stars.

Only then can we ensure the long term survival and immortality of humanity.