From The George Low Archives: The 1974 Made-For-Television Movie That “Irked” Jim Lovell 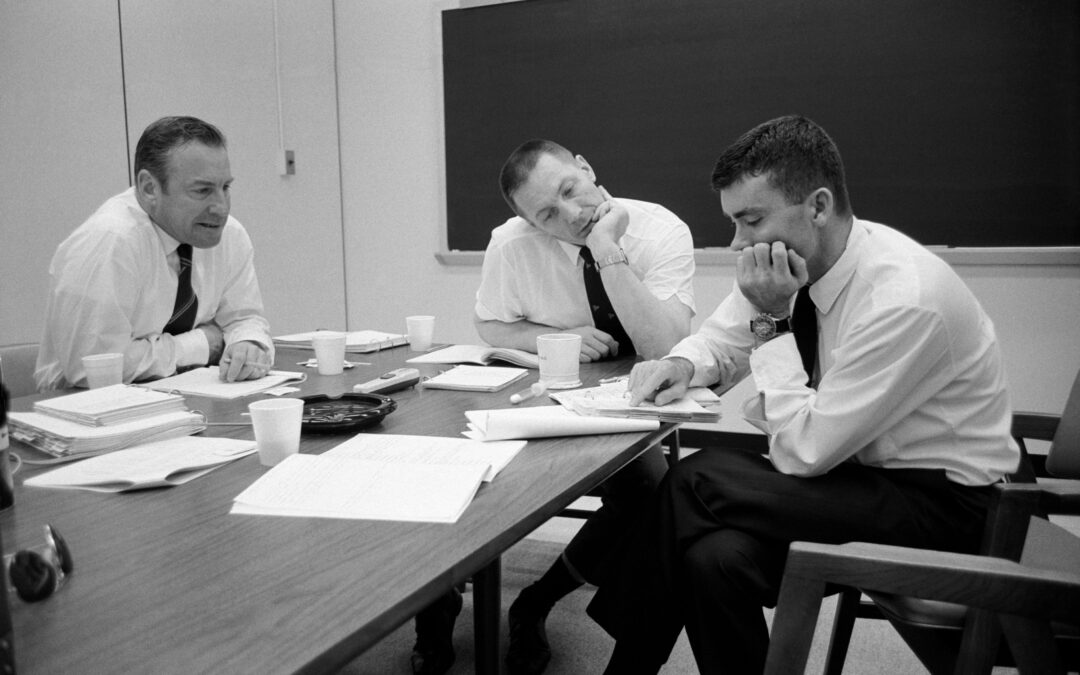 On Saturday, March 2, 1974, the American network ABC released Houston, We’ve Got A Problem, the first known movie to have anything (tangentially or otherwise) to do with Apollo 13, the lunar mission that famously saw its landing canceled due to a nearly catastrophic explosion in space 50 years ago. Some writing has been dedicated to this movie, which has nearly nothing to do with Apollo 13 itself (you can view it on YouTube, but consider yourself warned…it’s an archetypal mid-1970s made-for-television turkey, right up there with the ill-advised, borderline unwatchable 1979 NBC show Supertrain), and revolved largely around the exploits of fictitious retro officer Steve Bell (played with maximum cringeworthiness by I Spy’s Robert Culp). Even the very title of the film is a misquotation of the actual distress call made from Odyssey by command module pilot Jack Swigert, further subtracting credibility from the movie (if there ever was any).

Between Bell having heart-related episodes (one in a Speedo! By a swimming pool!) and reciting cheesy dialogue such as, “Babe, I’m gonna bring these guys home…I am! Because I’m the best retrofire officer that ever came down the damn street,” the film centered around the Mission Operations Control Room (MOCR), and the complete collapses of everyone’s personal lives the week that Apollo 13 decided to run into trouble. Fun facts: much of the filming took place inside the actual MOCR at Houston’s Johnson Space Center, and the top of astronaut Thomas P. Stafford’s head even made a cameo in the movie (he briefly “played” an unnamed astronaut attempting to troubleshoot in a simulator). Some actual MOCR personnel also made guest appearances. However, the film’s impending release – given its near-incomprehensible plot – brought little joy to many of the participants in the actual Apollo 13 saga…especially Jim Lovell, that mission’s commander.

Some documents from George Low’s archive now reveal the scope of Lovell’s unhappiness with the film’s script. A letter from Lovell written on February 11, 1974 addressed to then-NASA Administrator Dr. James C. Fletcher illuminated his concerns about the extreme dramatic license taken with the mission’s story, and read in part:

I have just read the script, and I am greatly disappointed.

The setting of the story is indeed based on the Apollo 13 flight. Actual voice tapes, real names, insignia, and facilities are used. However, the plot is fictitious and in poor taste. The story of the flight controllers’ efforts to bring Apollo 13 home include the old soap opera cliches of marital difficulty, drug overdose, a child custody fight, death in the family, and a heart attack. If one is to believe this story it was obvious more traumatic to be in Mission Control than to be on board the crippled spacecraft.

I resent the mixing of fact and fiction. The Apollo 13 story in itself is an exciting adventure tale without the embellishments found in an afternoon serial program. If NASA wanted exposure of this nature, this story should have been based on a fictitious space flight.

I can’t help but feel that NASA did a disservice to the flight crew and ground personnel connected with Apollo 13 by cooperating fully with this film.

The safe return of Apollo 13 was one of NASA’s finest hours. The people who made that feat possible deserve a more accurate recounting of that story.

Lovell apparently assumed that the project would be based upon Thirteen: The Flight That Failed, a well-received 1973 book written by spaceflight author Henry S.F. Cooper, Jr. (who, ironically, would go on to write one of the most factually inaccurate Skylab books ever published, 1976’s A House In Space). At any rate, a memo from NASA Public Affairs’ John P. Donnelly made it to Deputy Administrator Low’s desk on February 15, concerning the Lovell letter. Donnelly felt a phone call to mollify Lovell’s (understandable) ire might be the best way to handle the situation. “Question is: Who should do it? I will, if you like, but pass it along with the thought that he might be more inclined to listen to our side [underline added by Low’s pen] if the explanation came from you. Either way, please advise,” Donnelly wrote to Low. Low’s handwritten notes at the bottom, back to Donnelly, are interesting: “John – [I] would be happy to call him, but I need to be much better prepared than I now am. What is ‘our side’?”

Six days passed, and a second memo was delivered to Low on February 21 (the top of this memo reads in Low’s handwriting, “Why did it take six days to get to me?”). Here Donnelly discussed his damage control strategy. He claimed that Universal originally had wanted to make a “straight” Apollo 13 documentary, but whatever money the studio had offered Lovell, Haise, and Swigert, “evidently [it] wasn’t enough” (Note: this author is having a difficult time believing this claim). Donnelly then asserted that because the studio was then unable to do a “straight” approach, it opted to go forward with a “human interest” version with fictionalized elements. This author speculates that this approach may have been taken because of the public’s increasing lack of interest in spaceflight, as February 1974 marked the crewed end of the Skylab program, with a long gap in between Skylab 4’s splashdown and the July 1975 Apollo-Soyuz Test Project flight; in addition, despite the explosion and ensuing effort to get the crew home safely, much of the Apollo 13 audio is very businesslike and dry.

Donnelly then underscored that NASA’s involvement in the movie was on a “non-interference basis,” extended only to allowing filming at Johnson Space Center and utilizing actual MOCR personnel as extras, and that NASA could not “be arbiters of what’s artistic or ‘in good taste’ or not…in other words, we cooperate when we think it will ‘sell’ the space program, but not otherwise.” Donnelly then (rather hysterically) predicted the film wouldn’t be as crude as its script: “A great script can be a lousy movie. It is the acting and the unique talent brought to the production by the director that counts most in the end.” The entire memo in full is pictured below. Low’s handwritten notes on the bottom of this memo indicate that he let Donnelly himself call Lovell.

A February 28, 1974 AP article titled “Apollo 13 Movie Irks Lovell” discussed the aforementioned paper trail generated by the movie, and detailed a response from the movie’s executive producer, Herman Saunders, which further muddies the tale of why the film was so highly fictionalized. Saunders emphasized, “We could’ve never gotten a straight documentary on the network. So what we did was take the basic facts and add fictional drama on top. How would you keep people in suspense, otherwise, when they all know the outcome of the story already?” Saunders’ rationale for embellishing details in the movie’s narrative runs contrary to Donnelly’s assertion that the crew wanted to profit from a “straight” documentary, but did not get the monetary sums they desired.

After Houston’s premiere on March 2 that year, it thankfully all but disappeared from the public’s consciousness until the book Go, Flight!, written by Rick Houston and Milt Heflin, was published by the University of Nebraska Press in 2015, featuring a short synopsis of its dreadfulness. At long last, in 1995 a worthy movie told the mission’s story, with only some dramatic license – the Ron Howard-directed blockbuster Apollo 13, starring Tom Hanks, Bill Paxton, and Kevin Bacon as Lovell, lunar module pilot Fred Haise, and Swigert.

Many, many thanks to Richard Jurek and Alan Andres for allowing the author access to George Low’s archives.

Featured photo credit: “The three crew men of the problem plagued Apollo 13 mission are photographed during the first day of their postflight debriefing activity at the Manned Spacecraft Center (MSC).” April 20, 1970 NASA photo.