The National Space Society pays tribute to visionary champion of space exploration, Honorable Senator John Glenn, who passed away December 8 and today is being buried at Arlington National Cemetery. 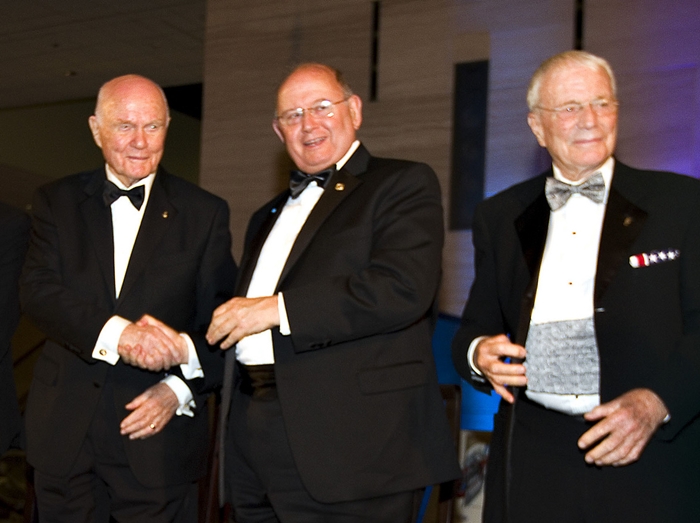 Governors John Glenn and Art Dula, along with Scott Carpenter at the 2012 International Space Development Conference in Washington, DC.

John H. Glenn was born on July 18, 1921, in Cambridge, Ohio. He was commissioned in the Marine Corps in 1943. During his World War II service, Mr. Glenn flew 59 combat missions in the South Pacific. During the Korean conflict, he flew 63 missions with Marine Fighter Squadron 311 and 27 missions as an exchange pilot with the Air Force.

In 1959, he was selected to be one of seven NASA Mercury astronauts from an original pool of 508. Three years later, on February 20, 1962, he made history as the first American to orbit the Earth, completing three orbits in a five-hour flight and returning to a hero’s welcome.

After his NASA service, Glenn took an active part in Democratic politics in Ohio and was elected to the U.S. Senate in 1974. Senator Glenn retired in 1998.

Mr. Glenn returned to space from Oct. 29 to Nov. 7, 1998, as a member of NASA’s Shuttle STS-95 Discovery mission during which the crew supported a variety of research payloads and investigations on space flight and aging. During that mission, Mr. Glenn made 134 Earth orbits in 213 hours and 44 minutes.

Mr. Glenn was married to Anna (Annie) Margaret Castor from 1943 to 2016. They have a son, John David, and a daughter, Carolyn Anne, and two grandchildren.