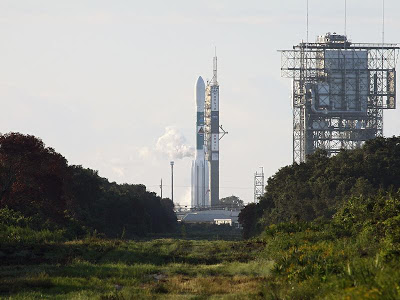 So, I am up and it is around 8:48 a.m. Watching NASA TV in an attempt to see the twin probes GRAIL launch to their lunar destination. GRAIL is a set of two probes destined for the moon, and will be measuring the moon’s gravity fields in an unprecedented lunar mission. I believe this will be the last launch from LC-17 at the Cape Canaveral Air Force Station.

8:50 a.m.: Waiting for next weather balloon data set to come in shortly after 9:00 a.m. The launch has already been scrubbed several times due to pesky high level winds.

8:53: Apparently now we have a yellow indication on fuel tank pressure. I don’t like that line of thinking. However, range is currently go. Just got news that latest weather balloon was GREEN. This is all according to NASA TV…launch director Tim Dunn will give the final word I suppose.

9:03: GRAIL is now on internal power. Standing by for release of the planned hold in 30 seconds.

9:17: GRAIL’s probes are now in a parking orbit; in an hour, another burn will take place in order to send the probes to the moon. The launch went fantastically and of course NASA delivered the wonder yet again.