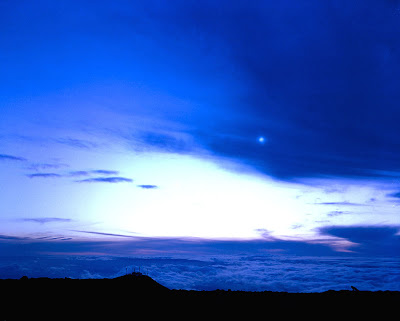 The resulting explosion from the Starfish Prime warhead over Maui, July 9, 1962. Photo from Los Alamos National Laboratory. Death, pretty death!
…How could possibly anything go wrong?
As most people know, the United States and the former Soviet Union were locked in a Cold War during the 1950s and 1960s. The “Space Race,” in part, happened due to the Cold War, as the U.S. wanted to outdo everything and anything the USSR had to offer. It’s no secret that during this period, there was a lot of nuclear testing, both underground and above ground. Well, at some point, both the U.S. and USSR decided it was a good idea to see what would happen if they nuked space. Yes. SPACE WAS NUKED. I didn’t make that up.
Starfish Prime was detonated 250 miles above the Earth on July 9, 1962. To this day, it remains the biggest high-altitude nuclear explosion and its effects were momentous. Above, one can view the magnificent aurora caused by the explosion – beta particles were attracted to the planet’s magnetic field and lit up the sky like a Christmas tree. However, high-energy electrons formed radiation belts. This would cause problems…the following day, Telstar 1 was launched from Cape Canaveral, becoming the first communications satellite to relay television pictures. It orbited along the Van Allen Belt, which had been energized by the nuclear warhead’s blast. Within a few months, the radiation damaged its electronics, causing it to fail. By February 21, 1963, the satellite failed, although it is still in Earth’s orbit (amazingly enough). Over the next few months, seven satellites failed due to radiation bombardment. The effects of Starfish Prime were felt through 1968, more than five years after the explosion.
In conclusion, here’s a lesson learned: don’t send stuff, in general – living or dead – into space along the path of a very recent nuclear detonation. You might get a bad sunburn, or worse.
For further reading, check out this 1964 NASA report on the effects of high-altitude nuclear explosions.