How I Met Tom Stafford 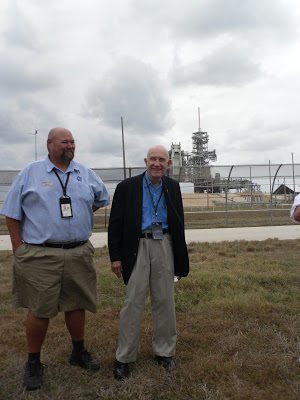 Gen. Tom Stafford bravely deals with my nervous giggling and dorkiness. April 14, 2012. Photo by me.
I’m basically copying this text from my Tumblr blog, As Only NASA Can, but I wanted to recap my Apollo 16 Anniversary experience at KSC. Oh, it was beyond amazing.
Anyway, we did our bus tour and disembarked at one point near the shuttle/Apollo launch pads (39A to be specific). A bus rolled up and out came Stafford and Gordon. Gordon was drinking water like a boss. He was dispatched to the other tour bus.
Anyway, TP (Tom Stafford’s nickname) strolled up to our group. I seriously thought I was going to collapse and couldn’t believe it. I’ve been looking at pictures of this guy in books for over 30 years and to see him in real life – knowing he was real and not some unreal figure from a book who accomplished all the things he did – was downright surreal.
I muttered something incomprehensible about Apollo 10 (“That looked fun!” – One of the derpiest comments I’ve ever made to anyone) and he was like, “Yeah. I did that. With John Young and Gene Cernan.” In the same voice most people say, “Yeah, I went to the store.” I couldn’t stop smiling. Having TP look directly at you is crazy.
After our bus tour (I sound like such a jerk, but I’ve seen the KSC facilities and was in a stupor by this point) we disembarked again at the Apollo Saturn V center. He was standing there being pursued by some dudes who wanted to talk. I went up to him and just said, “General, I just want to shake your hand.” He smiled and shook my hand and said, “Why, thank you, young lady.” Now I can tell my descendants that I shook a space pioneer’s hand. Holy crap.
I didn’t get an opportunity to speak to Duke, Mitchell or Haise (everyone was pretty pressed for time) but it was so weird to see those guys there and not in my space books I collected as a child. Duke still looks boyish and young. Mitchell is DEEP and strikes me as being extremely intelligent and underrated. Haise was unexpectedly hilarious. Here’s a real snippet from their panel discussion:

Member of audience: What does the moon smell like?
Duke: Well, you don’t get to smell it in the suit, but the dust in the LM smelled like gunpowder.
Mitchell: Yeah. It smelled like lava.
Haise: Well… (At this point everyone cracked up)

Also, Charlie Walker is the nicest dude ever. He’s another one I used to read about in the 1980s. Holy CRAP I can’t believe any of this stuff happened to me. I am still in shock. Walker’s lecture was pretty awesome, too and very inspiring. He worked for McDonnell Douglas and ended up becoming an astronaut himself. Amazing. 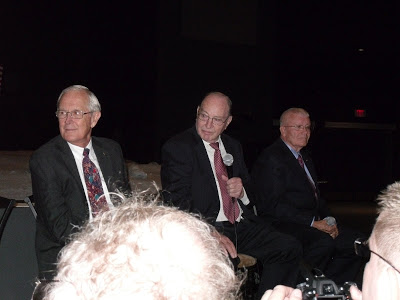