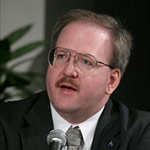 Jeff Greason’s speech at the Awards Dinner at the 2011 NSS International Space Development Conference is being widely regarded as a major statement in the field of space policy. A video of the speech is now on the NSS website.

Greason is President of XCOR Aerospace and was a member of the Augustine Committee (Review of U.S. Human Space Flight Plans Committee) established by the White House in 2009. He began his talk by defining the differences between goals, strategies, objectives, and tactics.

“Between having a goal and having tactics, you have to have a strategy — and we don’t. Until we have one, we’re going to continue to flail.”

We do have a goal, says Greason. Although it’s not widely recognized, it can be found in nearly every major policy document and commission report over the last 25 years. The Augustine Report, for example, “concludes that the ultimate goal of human exploration is to chart a path for human expansion in to the solar system.” But none of them quite dare use the “S” word, even though that’s what they are really talking about — [whisper] settlement. The reason they don’t dare use the word is they are not sure we can do it.

This point is illustrated in one of Greason’s slides about the lack of a strategy for settlement:

Greason then laid out — nondogmatically, as one of many possible approaches — his ideas for a possible strategy. “The purpose of the initial human outpost is not to be there and look cool. It is not to unfurl flags and take pretty pictures, and it is not the holy grail of science, although we will get all of those things. It’s to make gas.” Basically, each destination has the resources to make propellant to help reach the next destination — a strategy he calls “Planet Hopping.”

Greason includes the following elements of a strategy for space settlement:

* The key is to realize that cost per human being in space MUST constantly decrease in order to succeed.

* Each capability we add MUST be designed from the outset to transition to a private sector supported activity. Only in that way can we add new capabilities with constant budget.

* Each step forward must make maximum use of in-situ resources, both to lower cost of operations and to provide low cost resources to support next steps. This allows for exponential growth over time rather than linear.

Greason also pointed out that we have to realize that NASA’s budget is not going to go up. However, he added “It’s my belief that if we pursued this the right way, we actually could afford to do this, all the way out to the first landings on Mars, for the kind of budget NASA’s getting now.”

But Greason warned that if we continue on the current path, without a strategy, “we’re going to build a big rocket, and then we’re going to hope a space program shows up to fly on it. And in my opinion, that strategy — the strategy of default — is going to result in the end of the NASA human spaceflight program.”