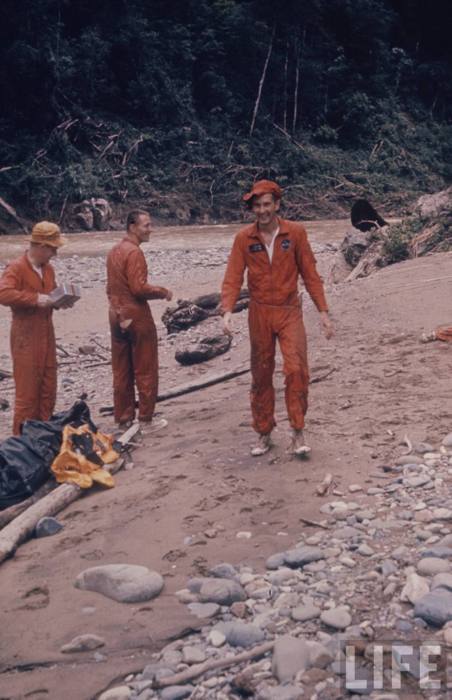 “Do these orange jumpsuits camouflage us? No…? THEY LIED TO US!” Unidentified astronaut, Jack Swigert, and Charlie Duke work the survival training look, 1967. Image courtesy of Insert Space Here.
Perhaps some of the very best astronaut images from the 1950s and 1960s involve the various, completely random forms of training these men were subjected to. Here’s a picture from a 1967 survival training photo set. Apparently NASA didn’t know that bright orange jumpsuits failed to camouflage full-grown men; also, Jack has apparently ripped his jumpsuit in the backside (4 tha laydeez!), while Charlie Duke attempts to look like he isn’t frazzled at all by having twenty pounds of river mud all over him. This was NASA’s attempt at giving these poor dudes a “spa day.”

However, it has been universally agreed that the best NASA training photo set from Life magazine involves this picture. Astronaut Groups One and Two Parachute Training, forever.