Joe Engle: The “You Are Tearing Me Apart, Lisa” of NASA 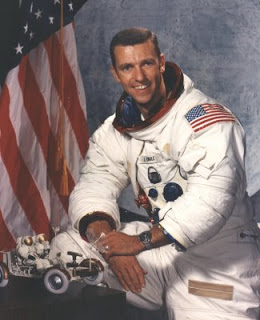 This picture is kind of a cop-out, because it never happened in real life. But, keep on reading. NASA portrait, late 1960s – early 1970s.
Joe Henry Engle was like the Space Shuttle Enterprise of the Apollo program. They gave him a nice pressure suit, some neat spacecraft models, a little toy rover with two miniaturized space dudes in it, put him in front of the inflatable Moon, snapped some pictures of him smiling, and basically told him he was going to the Moon on Apollo 17…until he wasn’t.
Joe Engle was (and is) a truly amazing pilot who flew hypersonic flights on the X-15 (an experimental space plane which Neil Armstrong had also flown). After achieving “astronaut” status at age 32 (flying in excess of altitudes of 50 miles), the only badass thing Joe really had left to do was to fly in Earth’s orbit, so he joined NASA as an astronaut in 1966 alongside other notable astros like Jack Swigert and Charlie Duke.
At some point Joe started training for the Apollo program, and I believe he did a sort of pre-SMEAT Skylab “Hey guys, let’s pretend we’re in space!” mockup mission with Vance Brand and Joseph Kerwin. Joe became the backup lunar module pilot for Apollo 14, and he became close friends with Eugene Cernan (they also had a very memorable backup crew patch).
Joe was slated to be the LEM pilot for Apollo 17, but NASA decided to send a geologist (Harrison “Jack” Schmitt) on the mission instead. Supposedly, NASA brass gave Joe a choice between flying on Apollo or on the then-nonexistent Space Shuttle; Joe preferred to take the Shuttle option, as it resembled a plane, and he had already flown a space plane. Gene discusses this whole situation at length in his great book, Last Man On The Moon, and seemed kind of broken up about NASA “breaking up the band.”
However, Joe had the last laugh. He ended up commanding the second shuttle mission in November 1981, and became the first and ONLY space shuttle commander to reenter and fly the shuttle manually – without computer assistance – from a speed of Mach 25 to touchdown. Why did he do this? NASA claims it was to test the shuttle’s operational limits, but I’m sure Joe did it for shits n’ giggles because he knew he was badass enough to do it. Hell, he probably wrote “SHOW ME THE RECEIPTS” in smoke plumes in the sky from the shuttle’s engines just because he was able to prior to touchdown. Also, he returned to space in 1985 on the shuttle Discovery.
What started out as an “Untold Victims of Apollo” story became a resounding success story, and Joe Engle came out of it all clearly winning.
Here’s a picture of Joe (in the middle) when he decided, briefly, to form a psychedelic power trio with Vance Brand and Joseph Kerwin: 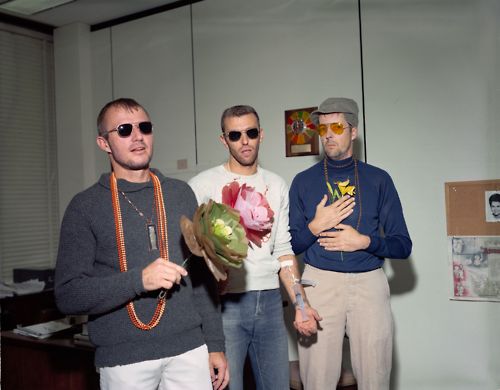