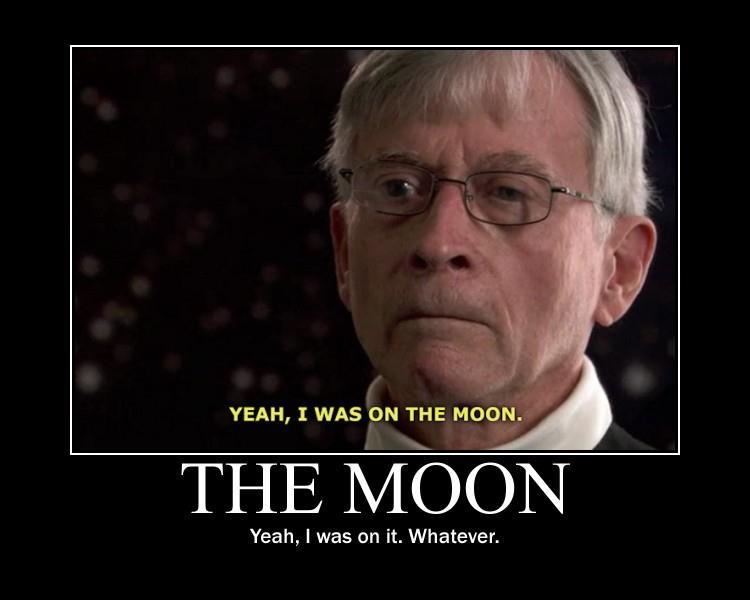 “Yeah. I walked on the moon. So what.” Screencap from When We Left Earth: The NASA Missions. Motivation by John Watts Young.
John Young, super badass of manned spaceflight, is a comedy genius and the master of the understatement. Here are a few examples of John’s tendency to be a bit…laconic.
In the 2006 Discovery Channel documentary When We Left Earth: The NASA Missions, John is profiled throughout the program. How was it like to walk on the moon, John? “Yeah, I was on the moon.” Was it fun to drive the lunar rover, just you and Charlie Duke, upon the stark, boulder-strewn face of Descartes? “Yeah, it was fun.” He distills his entire experience on Apollo 16 – perhaps one of the most scientifically ambitious Apollo missions – into these few words.
Here’s a choice quote from John in 1972, about driving the lunar rover upon more familiar terrain, the Earth:

“I’m a terrible driver. To train us for the rougher terrain on this mission they prepared a sort of obstacle course at the Cape… they told me I was doing pretty good the other day. I only hit five logs, three rocks, an orange, and a lizard… I didn’t see the lizard.”

One of my favorite instances of John’s “whatever…it wuz nuthin'” attitude can be gleaned from Gemini 10, a 1966 mission in which he successfully performed a docking maneuver using sight only with an Agena target. Mike Collins (later the command module pilot with Apollo 11, and writer of the finest astronaut autobiography, Carrying the Fire) also performed a spacewalk.
During that mission, the guys experienced a certain amount of eye irritation, which they didn’t share with ground crews because they didn’t want to alarm anyone. When asked about this phenomenon later, John said, “I didn’t say anything about it because I figured I’d just be called a sissy.”