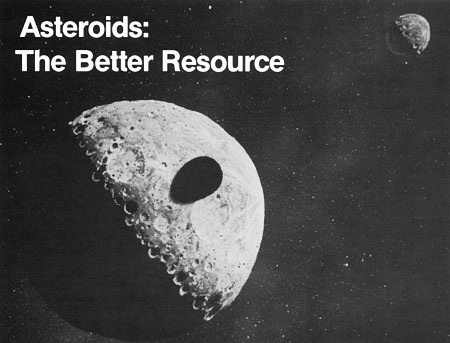 The “The Asteroidal Manifesto” (in the February L-5 News) was an opening broadside in an open debate on lunar vs. asteroidal resources. It maintained that we must choose where to go first for space resources, and outlined a case for the less obvious option, for the more distant and less Earth-like asteroids. Last month’s News carried a reply from geologist Stephen Gillett, outlining some advantages of the Moon.

A JPL scientist has questioned the wisdom of debating this, suggesting that we simply study all options because we now know too little. Indeed, most agree that the Moon and asteroids both deserve study (either could serve if the other vanished), and that both have advantages. Yet, though much remains to learn, much is known. Facing uncertainty in a decision analysis, it is standard practice to use tentative judgements to guide further study.

Though one option may seem likely to prove inferior (making commitment to it unwise), further study of it often makes sense; study is cheap when it has a fair chance of saving billions. With this principle in mind, debate may be seen not as premature, but as preliminary. The debate format, by stirring rebuttals and encouraging a point-by-point consideration of the facts, can help to clarify our overall state of knowledge; we may know more than we realize.

Donning my partisan hat, I will now respond to some of Stephen Gillett’s points, starting with the proximity issue. He argues ably for the value of the Moon; nevertheless, the asteroids seem better.

The Moon’s proximity offers obvious advantages: short travel times make human crews safer and cheaper, and brief light-lag eases control of remote operation. If, however, initial “mining” operation will simply fill bags with loose material, then virtually unsupervised devices — sweeper robots — seem practical; neither travel time nor light-lag then matter much, and the advantages of proximity fade. As space industry grows, human beings will have the run of the Solar system; even earlier, semi-autonomous robots could likely handle more than mere dirt-sweeping. Meanwhile, complex processes can be confined to near-Earth space.

The relative motions of Earth and any given asteroid make good transfer opportunities relatively infrequent, and infrequent transfers would increase the inventory cost of resources stockpiled for use between deliveries. The main cost tied up in this inventory, however, would be that invested in its transportation. Low delta-V’s, aerobraking, and use of efficient, low-thrust propulsion systems promise to make the transportation cost of asteroidal materials far less than that of lunar materials; this seems likely to swamp the effect of inventory costs.

Still, a systems analysis would be needed to quantify the costs of infrequent launch windows. For example, how greatly will scheduling inefficiencies decrease the useful operating time of propulsion systems? How rapidly do such costs lessen as the number of surveyed target asteroids grows? Such factors can only be estimated now, but the overall prospects look good. With many target asteroids, more windows will open and such costs will lessen; a modest search should find many as accessible as the best now known. Further propulsion systems (such as Lightsails) could make many known asteroids easy to reach. Asteroids seem more accessible than the Moon, despite their greater distances.

The sheer size of the Moon increases the possiblilities for ore formation, at least compared to those in a smaller version of itself. Separation on a vast scale, however, matters less than the degree
of concentration. If some process swept up all the uranium in a typical cubic kilometer of the Earth’s crust (the volume of a small asteroid), the resulting block of uranium would mass over 10,000 tons. If, however, all the uranium in Earth’s crust were concentrated a hundred fold, a block more massive than any asteroid would result, but it would hold a mere 400 parts per million. Greater concentration would be worth more than greater quantity, particularly to a small-scale industry. Uranium itself, of course, seems worth little in free space, given the steady flood of sunlight.

The refractory lithophiles Gillett mentions include aluminum, titanium, and magnesium; these may seem attractive for space use, since they are “aerospace metals.” Asteroidal (that is, meteoritic) samples hold up to 27% aluminum oxide (1), and some carbonaceous chrondrites contain veins of water — soluble magnesium salts (2) — the Moon has no monopoly on such metals.

Surprisingly, however, space industry has little special need for light metals. “Aerospace” today suggests vehicles, devices flung about repeatedly (or thrown very high) by burning fuels; low mass is important to their performance. Space industrial facilities — factories, stations, powerplants — will be different: in use, they will simply orbit, as would a feather or boulder. Added mass can even help, by blocking radiation and slowing oribital decay.

Simple delivered cost seems most important, and this will include the costs of both transportation and refining. Energy requirements can indicate relative costs. Call the energy needed to lift a kilogram from the Moon one unit. Returning a kilogram from a target asteroid will require less than one unit; melting and refining a kilogram of
asteroidal steel will require about a half a unit. The energy needed to break a kilogram of light metals free from lunar oxides, however, is roughly ten units. Further, asteroidal steel can be melted and refined using inexpensive heat from a solar furnace, while planned processes for reducing lunar oxides require expensive electric power. Process complexity issues likewise seem to favor steel.

For low-cost space construction, asteroidal steel seems best; a low-expansion nickel-iron alloy (Invar) could be used to avoid thermal distortion. Where low mass matters, graphite and plastics are becoming popular, and asteroidal hydrocarbons provide a feedstock unmatched on the Moon. For market value on Earth, precious and strategic metals from asteroids seem attractive; see John Lewis’s review in this issue. I know of no lunar materials superior to terrestrial ores. (The suggestion that lunar titanium might find a terrestrial market was incorrectly attributed to me in The High Frontier; O’Neill apparently confused me with another researcher.) Asteroids, however, hold siderophile metals like those that sank to Earth’s core — separated, yet not beyond reach.

Stephen Gillett discusses the possibility of lunar ores enriched in incompatible elements (those not easily incorporated in crystals of common minerals as magma cools and solidifies). He notes that water is commonly considered vital to concentrating incompatible elements in the residual liquid as magma solidifies, but proposes that traces of chlorine and sulfur might have played a similar role to that of water in the dry lunar magmas; KREEP shows that some concentration occurs. The experiments he suggests seem well worth doing, to see if ores containing “chlorine, lithium, beryllium, zirconium, uranium, thorium, the rare-earth elements, and so forth” might indeed have formed. These elements are not critical to early space development, however, and chlorine — perhaps the most valuable, given its many uses in industrial chemistry — makes up 0.8% of the soluble salts found in carbonaceous chondrites (2).

One can equally well speculate regarding possible asteroidal ores not yet seen in terrestrial samples, of course. The Moon has been sampled in relatively few sites; likewise, most meteoritic samples are thought to come from relatively few parent bodies (3). Some classes of meteorite are represented by but one specimen, suggesting that some — represented by none — remain unknown. Nickel-iron meteorites contain a spectrum of nickel contents ranging up to 34% — except for one that contains 62% (1). Our lunar samples contain grains thrown from far across the lunar surface; do they contain comparable evidence for unusual concentrations of valuable materials?

The asteroids, though smaller and faster-cooling, seem a match for the Moon as targets for speculative prospecting. Vesta, for example, appears basaltic and differentiated (like the Moon) and has over one-tenth the Moon’s diameter. Many meteorites were melted and resolidified; asteroidal materials contained water, which perhaps mobilized incompatible elements. Further, comparing rock to rock, metal to metal, and sulfide to sulfide, concentrations of trace elements have been found to vary from sample to sample by factors of several hundred or more (4).

Hydrothermal processes (surely lacking on the Moon!) form many terrestrial ores; they require porous rock saturated with water, together with heating to drive convection, dissolve compounds in a large volume, and deposit them in a smaller volume. Some carbonaceous chondrites show veins of water-soluble salts; other signs point to their having been water-saturated for at least a thousand years (3). The cores of some asteroids melted, showing the presence of ample heat. Thus, hydrothermal deposits are not inconceivable. Similarly, deposits formed by volatilization and subsequent condensation in vents seem possible; metals such as tin and lead might be concentrated by such a mechanism. Finally, the composition of asteroidal rocks before and after their melting and differentiation strongly suggests that a sulfide phase, troilite, may be found in massive veins (5). One troilite-rich meteorite is known; any pure troilite meteoroids are thought to be destroyed by atmospoheric entry (as are those carbonaceous chondrites richest in water and organics). In short, the asteroid’s known resources seem better than the Moon’s, and their unknown resources seem more promising.