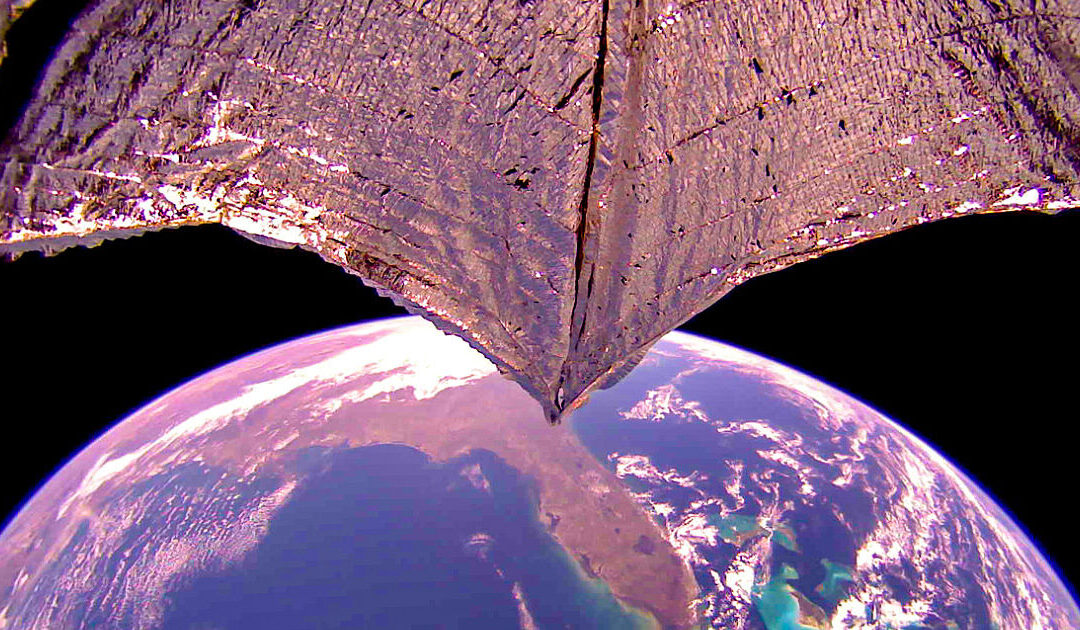 On July 22, 2022, the Planetary Society held a Webinar event celebrating the three year anniversary of the solar sail deployment of the Society-built LightSail 2 spacecraft. The LightSail 2 made history by becoming the first spacecraft to change its orbital altitude by thrust generated by the pressure of sunlight. The LightSail 2 is a 78 cm length CubeSat that is attached to a 32 square meter solar sail. The spacecraft is powered by 4 solar arrays with 8 rechargeable lithium-ion batteries that keep the CubeSat functioning during ecliptic periods. LightSail 2 uses the technique called laser ranging to determine the increase in spacecraft orbital altitude by measuring how long it takes a ground-based laser beam to reflect off a small array of mirrors located at the bottom of the CubeSat.

Solar Sail propulsion is based on the physics of light. Light is made up of particles called photons that are made up of energy according to Einstein’s famous equation E = mc2. Even though photons have no mass, they have momentum due to their energy content. When the photons of sunlight reflect off the Mylar sail of the LightSail 2, they exchange momentum with the spacecraft. This momentum exchange generates a force (thrust) that propels the spacecraft into a higher orbit. Even though the thrust generated by solar photons is very tiny, it is continuous, with the spacecraft experiencing constant acceleration. Since the LightSail 2 was initially placed in Low Earth Orbit (LEO) by a Falcon Heavy rocket, the spacecraft experiences a steady drag force caused by the high atmospheric density of LEO altitude air molecules.

According to Bruce Betts, LightSail 2 Program Manager, the altitude profile of the spacecraft occurred in 3 major stages. The first stage (from July 2019 to May of 2021), occurred during solar minimum where the spacecraft experienced a slow decay in its orbit due solely to atmospheric drag effects. The second stage was from May to August of 2021 (also during solar minimum), when the spacecraft’s gyro was properly calibrated which resulted in optimum solar sail surface area exposed to the sun causing a small increase in spacecraft altitude per orbital period. The third stage has occurred since August of 2021 with increasing solar activity (increasing extreme ultraviolet radiation) resulting in an increasing rate of orbital decay of the LightSail 2 spacecraft.

The success of the LightSail 2 mission paves the way for a future of solar sail propelled CubeSats operating in Earth orbit, Cis-Lunar space, and lunar orbit. NASA and other space agencies have solar sail propelled missions on their agendas, essentially establishing solar sailing as a standard method of spacecraft propulsion. Solar sail propulsion is redefined as Light Sail propulsion when the photons are generated by a high energy laser. This laser can be ground based or placed in orbit, with solar power providing the electricity for the orbiting laser. Future solar powered orbital lasers could send small spacecraft to distant solar system destinations such as the Kuiper Belt or the Oort Cloud. If the laser is powerful enough, a small spacecraft or fleet of spacecrafts could theoretically reach velocities approaching some percent of the speed of light. These spacecraft could reach the nearest star system, Proxima Centauri, which is approximately 4 light years away, in a reasonable amount of time. Interstellar travel, powered by light sail propulsion, would become a reality.

Richard Howard is Chair of the NSS Value Enhancement Subcommittee of the NSS Membership Committee and a member NSS Political Action Network and volunteer for the Alliance for Space Development March Storm and Fall Fury Congressional visit events.