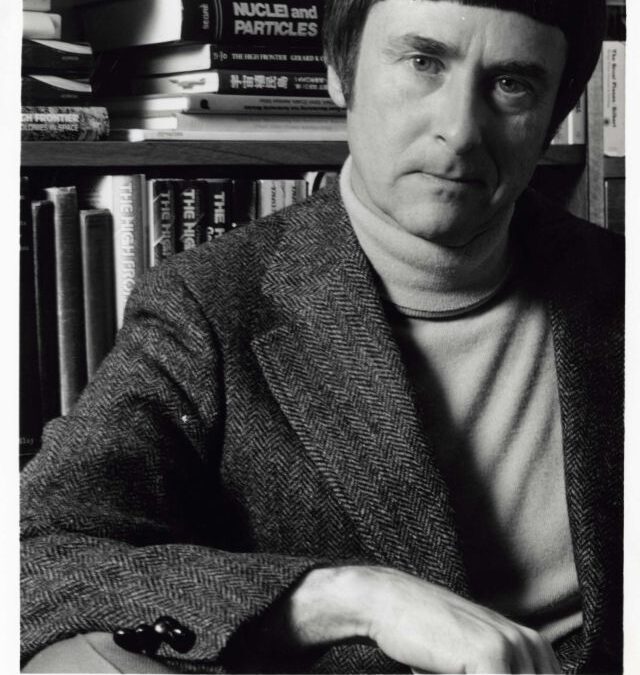 A previous installment of This Space Available discussed Dr. Brian O’Leary’s ubiquity in op-eds and media before and after the publication of his 1970 memoir, The Making of an Ex-Astronaut. While there is not enough space in a blog format to discuss Dr. Gerard K. O’Neill’s pop culture presence throughout the 1970s – indeed, he rose to a level of fame enjoyed by another working scientist from that era, Dr. Carl Sagan – we’ll discuss selected appearances from television shows and in print, which encompassed The Tonight Show with Johnny Carson, an appearance on a WNET program called The Roundtable with Isaac Asimov, Nova on PBS, People magazine, and even a rather serious, long interview that found a home within the pages of the August 1976 issue of Penthouse. (Author’s note: previous installments in this series discuss O’Neill’s message and vision in more detail; this piece is meant to discuss O’Neill’s development as a science communicator, and his many appearances in television and print.)

The Evolution of O’Neill on Television

One of O’Neill’s first television appearances was on WNET, the New York flagship PBS station, on a program called The Roundtable, which was hosted by former Esquire magazine editor Harold Hayes. Broadcast in 1975, the footage still exists on the Space Studies Institute’s YouTube channel, in glorious, grainy black and white video. What’s notable about this interview is the interplay between O’Neill and science fiction writer Isaac Asimov, who also wrote about space settlement during this period; a July 1976 issue of National Geographic showcased Asimov’s views of a Space Age future, interspersed with spectacular paintings by Pierre Mion.

To really get a feel for O’Neill’s media personality around this time, you should watch the interview; while host Hayes gives him plenty of time and latitude to discuss his vision of space habitation, O’Neill’s quiet, professorial manner versus Asimov’s more showman-like personality is a study in contrasts. A similar audio-only interview, conducted by Asimov in 1974, exists on the Space Studies Institute’s Soundcloud channel, and shows an even quieter, more measured O’Neill. But by the time The High Frontier was published in 1976, O’Neill showed himself to be more at ease in front of the camera.

On June 16, 1977, O’Neill appeared more relaxed on The Tonight Show with Johnny Carson, likely owing to his greater experience with media appearances, and also to Carson’s well-established enthusiasm for spaceflight topics (indeed, Carson had interviewed a great many astronauts, science personalities, and counted Dr. Carl Sagan as a regular guest on his show). In February 1978, O’Neill (and colleague Dr. Peter Glaser, an early proponent of satellite solar power) appeared on PBS’ Nova, a science program begun in 1974 by Boston’s WGBH, in an episode entitled The Final Frontier. While his appearance on this program was less chatty and loose than his sojourn with Johnny Carson, you can tell he’s definitely locked into what would remain his image for the rest of his career and life: with an intensity in his eyes, he laid out earnestly why – and how – space settlement could save the human species.

By the 1980s, O’Neill’s mainstream star power had faded, but a program hosted by Jo Franklin that is still viewable on the SSI’s YouTube channel still shows that he was committed as ever to his vision, even when his interview segments were surrounded by talking heads critical of the same vision. By the late 1980s, O’Neill – despite battling the leukemia that would ultimately cost him his life in 1992 – had eased completely into the role of “elder statesman” of space settlement, as we see in a video recording entitled “The Vision Uncut” on the SSI channel. While his health may have been flagging, he remained energetic and even gutsy on camera, driving home truths about spaceflight and bureaucracy – and why enthusiasts and engineers alike should keep up their optimism about a space-faring future.

By the mid-1970s, a New York Times front page article about O’Neill’s space settlement treatises led to oodles of print discussing the scientist and his ideas, which ranged from hard-hitting interviews, pithy think pieces, and breezy personal profiles. While it might seem surprising that the modest O’Neill was interviewed extensively in August 1976’s issue of Penthouse, the Bob Guccione extravaganza known more for soft-focus adult content and letters of dubious origin, it actually makes perfect sense because the magazine had profiled other science personalities before, such as Gene Roddenberry, creator of Star Trek. In addition, Guccione would publish OMNI, the famous tech and sci-fi magazine, which would also feature O’Neill as both a subject and a writer.

If you procure a copy of this magazine, you might also be surprised to find it’s one of O’Neill’s best interviews from the era, and shows him to be technically adept as well as emotionally convincing. The illustration opening the article showed a space-suited O’Neill in front of his far-out visions, inserting the scientist directly into the sometimes strange, but diverse pop culture world of the decade as a distinctive space personality in his own right – Spock haircut and all.

He discussed the then-current troubles faced by the United States, which included high unemployment and energy crises, and he also emphasized how domestic and international concerns could be mitigated by savvy development in space. He even echoed colleagues including O’Leary and Dr. Philip Chapman, stating his beliefs about Apollo’s legacy – a brave thing to do so shortly after the program had ground to a halt in 1972: “…Apollo was a scientific program, and, of course, had national prestige built into it. But the satisfactions that came out of it appeared to be limited. In retrospect, I would say that one of the best justifications for Apollo is the space-colonization program. We couldn’t have proposed colonization without knowing the consistency of the lunar soil.”

How did O’Neill’s colleagues react to his appearance in Penthouse? An article in the NSS’ Spring 2017 issue of Ad Astra by Clifford R. McMurray entitled “The Dream at 40: Gerard O’Neill’s Vision for Space Settlement,” featured an interview with Tasha O’Neill, who, while being O’Neill’s wife, was also an equal partner in his space settlement vision: “When he was interviewed for Penthouse he went to his colleagues and said, ‘I just wanted to warn you…’ but they were all excited. It gave him some more cachet than he had before.”

“Maybe We Are Alone”

While the Penthouse interview focused nearly entirely on the vision that would appear in lengthier form in The High Frontier, a breezy, informal December 1977 profile in People magazine focuses more on O’Neill the person versus space settlement, and in it we find out more about his personal life and family. However, he does have some good original insights in this one, especially on whether the possible presence of other lifeforms in the Universe mitigates the need or desire for a vision such as his.

At the time of the People article’s publication, “alien” life was a topic popular in not only spaceflight (the Viking landers on Mars carried biological experiment suites, which were searching for the existence of life on the Red Planet), but also in New Age communities (which then-colleague O’Leary would soon become a voice for). In this interview, O’Neill dared to suggest that maybe humanity was a one-of-a-kind occurrence:

“We take comfort in the assumption that we surely are only one of many different civilizations scattered across the galaxy. As a result, we may think it doesn’t matter what happens to us—life is so plentiful…But if that is so, why haven’t we run into any of the people who came before us in the galaxy? Perhaps when other civilizations reached our point they blew themselves up. We haven’t done anything yet to suggest we won’t do the same thing. Maybe life is far more rare than we realize and, up to now, we’ve shirked our responsibility to try to preserve it. Maybe we are alone.”

This quote kind of summed up O’Neill’s sort of subversive space program within a space program idea – while America’s space program and even some colleagues were interested in searching for possible extraterrestrial life, his suggestion that it may have never existed or maybe it destroyed itself not only gave credence to his insistence that we need to get off the planet to extend the human species, but also poked at the fringe communities responsible for the “alien” craze (see also: Bigfoot, the Loch Ness monster, and human combustion, phenomena bandied about popularly during the 1970s).

O’Neill’s roots in scientific practicality not only allowed him to enterprise his vision to a variety of audiences who normally may have had zero interest in something as seemingly wild as space cities, but also gave him the opportunity to subtly criticize UFO and pseudoscience hysteria – of course, in an elegant way.