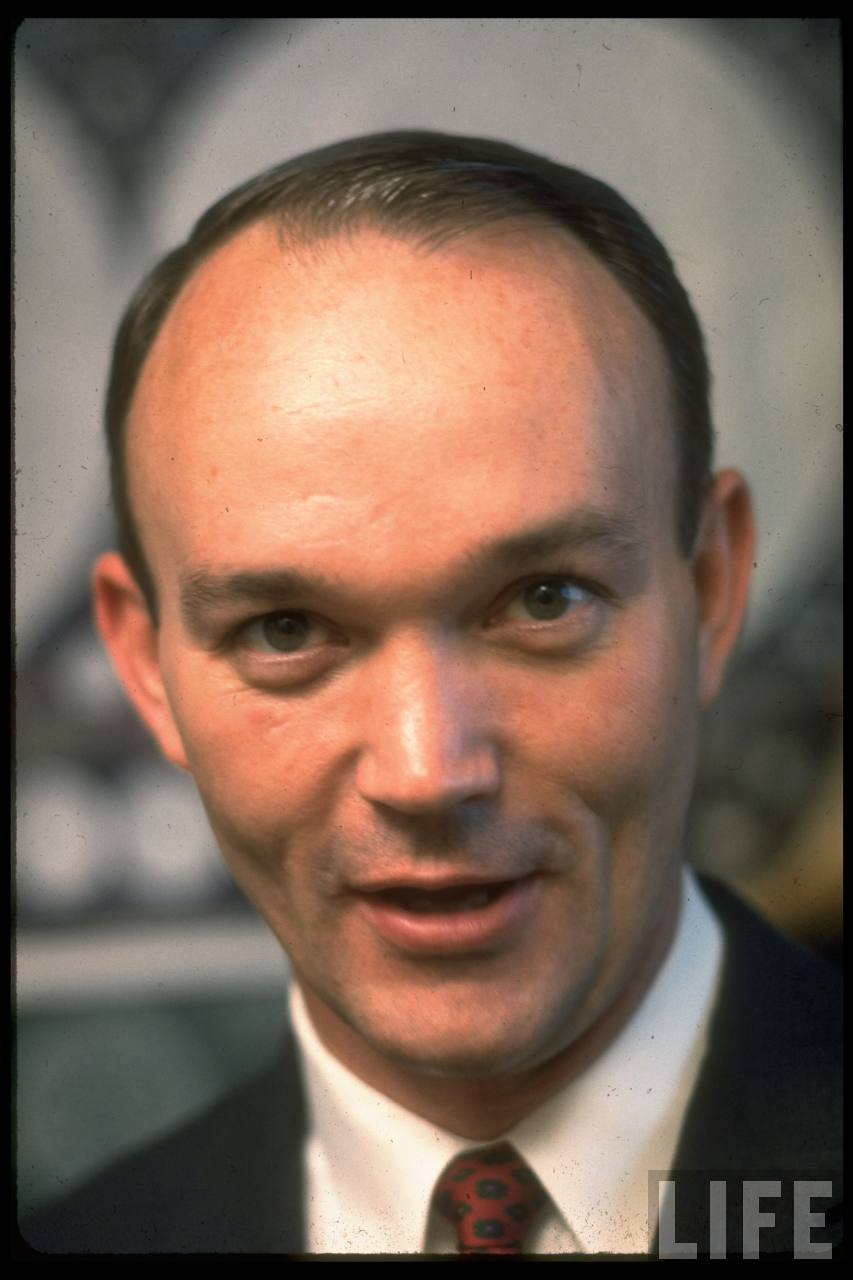 Collins, like, raps, cats. 1969 Life magazine photo.
Most manned spaceflight enthusiasts have been wholly familiarized with the stories of the two moon-walkers of Apollo 11. There’s Buzz Aldrin, who has written not just one but two autobiographies (1973’s Return To Earth and 2009’s Magnificent Desolation), and who also appears to be just about everywhere on TV at the drop of a hat. There’s Neil Armstrong, the subject of James R. Hansen’s fine 2005 authorized biography, First Man. Also, we’ve already established that publicity-wise Neil is Buzz’s polar opposite. Save for a few Apollo reunions, we don’t see much of Ye Mighty Neil.

Then there’s the third crew member of Apollo 11, who didn’t walk on the moon but orbited the lunar terrain roughly 60 miles above his more famous counterparts. He’s the coolest astronaut you probably aren’t that familiar with, and he probably wrote the greatest, funniest, most eminently quotable astronaut autobiography ever. That man is Mike Collins.

A short biography of Mike Collins: an Air Force test pilot, Collins joined NASA in 1963 alongside colleagues such as Alan Bean, Buzz Aldrin, Eugene Cernan, and Roger Chaffee. In 1966, he made his first flight on Gemini 10, with mission commander/Florida’s favorite country boy John Young (who Collins described hilariously as being generally unflappable, but very uncommunicative). He made a successful EVA on that mission, and was supposed to be on Apollo 8. However, a back injury necessitated surgery; as it was, Collins was scrubbed from that flight. But read on, as Collins would ultimately be rewarded with one of the baddest assignments ever as a command module pilot.

After making a quick recovery from surgery, Collins was thrown into training for Apollo 11. It’s pretty well known that while his two more famous counterparts were on the moon, Collins was left to his own devices inside the command module. Collins possessed a much less publicly visible role in perhaps the most historical NASA mission, ever. This is where Collins’ unique brand of class and duty comes into play; in every account of Apollo 11, Collins did not appear to be resentful or upset that he never walked on the moon. Many of his colleagues would have not acted with such self-restraint.

After Apollo 11, Collins left the space biz, and at one point worked for the Smithsonian Institution, which is pretty awesome in itself.

Mike Collins was also sort of the Cool Hipster Dad of NASA in the 1960s. He liked poetry, enjoyed painting as a hobby, was an expert about fine wines, and was very well-read. Collins bucked the trend of being a typical fighter jock, and was extremely verbose and funny.

Collins’ book Carrying The Fire: An Astronaut’s Journey (1974) is a must read for any space enthusiast, young or old. His descriptions of John Young’s country boy ways and Buzz Aldrin’s knack for accessorizing will have you in hysterics. It is an ideal bookshelf companion to Eugene Cernan’s Last Man On The Moon (my other favorite astronaut biography, which is also hilarious at parts…I’ll save that review for a later time).

Here’s a typically strident, yet on-point quote from Collins in 2009, when being interviewed for the 40th anniversary of Apollo 11; he had been asked, “Are you grumpy?”:

At age 78, yes, in many ways. Some things about current society irritate me, such as the adulation of celebrities and the inflation of heroism…Celebrities? What nonsense, what an empty concept for a person to be, as my friend the great historian Daniel Boorstin put it, “known for his well-known-ness.” How many live-ins, how many trips to rehab, maybe—wow—you could even get arrested and then you would really be noticed. Don’t get me started.

Collins also stated that he currently enjoys “running, biking, swimming, fishing, painting, cooking, reading, worrying about the stock market, [and] searching for a really good bottle of cabernet under ten dollars.” Hopefully Mike is busting out a celebratory bottle of wine somewhere, and is continuing to chill under the stars.