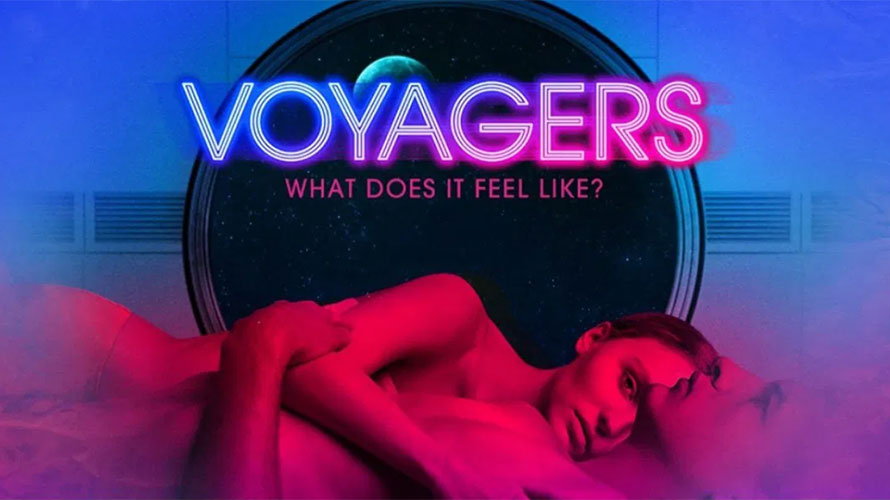 Voyagers is a difficult film to review for a person who believes in the vision of space settlement. While on the surface it is a story about a generation ship that sets out from Earth toward an apparently habitable exoplanet—we learn little more about the backstory or destination than that—it rapidly evolves into a tale of innate human traits, tribalism, sensuality, violent impulses, and that ultimate question of the human migration of space: will we carry the worst of us into the final frontier? In Voyagers, the answer is yes, though that is a conditional yes—reason and higher graces prevail in the end, but the story takes us through the basic ugliness of human behaviors unchecked on the way there.

In a nutshell, the film has elements of 2001: A Space Odyssey, Interstellar, THX-1138 (look it up if you’ve never seen it—that’s an important marker), and finally—and perhaps most importantly—a mixed-gender Lord of the Flies. There’s even a touch of the somewhat-forgettable Blue Lagoon—and if that sounds complex, it is.

The bottom line (spoiler alert): we do take our baser traits with us wherever we go, despite our best efforts to control them. It can work out in the end, but that is not a foregone conclusion. And, at least in this story, emerging into the light will ultimately require a lot of youthful hormone-fueled mayhem and more than one murder. It’s not pretty but may ultimately be closer to the truth than many of us would like.

In a nutshell, a group of babies are bred from fertile donations from some of the finest minds—physicists, engineers, mathematicians—of the age; you get the idea. They are raised without parents in a completely sealed environment—no visitors, no trips outside into nature, and so forth. In effect, they are born into a sealed, generation ship-like environment, and are submerged in intensive scientific training with little external stimuli. It’s all a bit Brave New World-ish, including a substance they drink, called “The Blue,” which regulates emotions—the young people are essentially well-trained automatons with low affect and coldly regulated emotions. It’s a ship full of young, good-looking Vulcans sans the fancy ears.

We are not told much of their departure except that Earth is in an environmental crisis, and the ultimate arrival of their offspring at a nearby Earth-like exoplanet will allow humanity to begin anew. They are shuttled to a massive generation ship (called, with a touch of irony, “Humanitus”) in Earth orbit with one very sympathetic adult chaperone, Richard (Colin Ferrell), volunteering to accompany them.

The plot shifts to ten years later, with the ship filled with teenagers attending to the many tasks required to keep the ship functioning, with the sole additional assignment of keeping their genetic material viable for their grandchildren who will settle the unnamed exoplanet 86 years in their future. It’s worth note that the producers kept the color palette and lighting cold and sterile aboard the ship, with no notable use of any bright colors.

All is going well—if one considers a somewhat zombie-like existence ideal—until some of the kids realize that “The Blue” is an emotional and behavioral inhibitor and stop drinking it, which is against regulations. Richard gently admonishes them to stay with the program. In one notable scene, where Richard is acting increasingly as the father/psychotherapist to the youthful crew, Chris (Tye Sheridan) confronts him about the growing danger of going off “The Blue”—”We didn’t ask to be here …  we’re just going to die in the end, so what does it matter if we are good or not?” Richard doesn’t have a ready answer, and neither do we as the audience. It’s a question worth pondering, and certainly not one confined to a spaceflight movie.

As we are digesting this, an in-flight emergency prompts Richard and Chris to perform a spacewalk to repair the communication system. In the process, Richard, the only adult in the crew, is killed. The young crew is now on their own (which was how the mission was designed in the first place).

A new commander is chosen by vote, in accordance with mission rules—Chris is now in charge. But one of the other young men, Zac (Fionn Whitehead) is unhappy with the arrangement. Zac has led the “don’t drink ‘The Blue’” movement and the tension between these two emerging alpha males begins to increase. There are other key players, notably Sela (Lily-Rose Depp, who is slowly moving closer to Chris), but the main characters now emerging are Chris and Zac. Confrontation is certain, made all-the-more inevitable with the discovery of a secret cache of energy weapons intended for use on the new world they are headed to (note: spoilers ahead).

Here and there, with no preamble of note, rapid-fire montages of film clips of nature, war and eroticism are inserted into the film; these are presumably the subconscious visions of the crewmembers who have stopped taking “The Blue”—they are starting to experience the inner voices of Homo Sapiens, good and bad. It’s another bit of unremarked-upon social commentary that leaves us to draw our own conclusions as to its ultimate meaning.

In the midst of this Lord of the Flies scenario, another element is introduced—the ship is making odd noises, and there was a curious and frightening “black cloud” that appeared to envelop Richard at the moment of his demise—many fear there is an alien aboard. It later comes out, however, that Zac instigated Richard’s death via remote control during the repair spacewalk. We, as viewers, don’t know if there is an alien or not, but are increasingly convinced that Zac is one unstable, power-hungry dude, and this is borne out when he instigates a mutiny.

From here the film becomes a long struggle for dominance with the crew split between following Zac or Richard. Chaos ensues onboard—discipline slides, passions emerge between crewmembers, and work details evaporate. The beautiful young people (remember, they were bred for this from the best and brightest) discover the joys of sensuality and sex, and ultimately the inevitable tensions erupt into violence. Chris tries to maintain some semblance of order, but his following diminishes over time to a handful of crewmembers. Zac is more charismatic with his wild and anarchic ways, and the mission appears to be going off the rails. To cut to the chase, Chris and Sela are eventually chased by Zac, who has murder in mind, and Zac is ultimately pushed out an airlock sans pressure suit. Problem solved, but not in the congenial manner that the designers of the mission envisioned. While clearly a matter of self-defense, we are again left to ponder the moral questions ourselves—the film will not hand you those answers.

At this point you may be wondering what this has to do with space settlement rather than a dark, out-of-control episode of The Love Boat. It is tempting to say, “not much,” but that would miss the point: we take who we are with us wherever we go. The descent from order to chaos is very much in keeping with some of the key tenets of human behavior, and with the inhibitory function of “The Blue”—which has obvious ties to the drug Soma in Brave New World—removed, baser human nature emerges along with the legitimate evolutionary demands placed upon humans—dominate and reproduce.

There’s a lot more to chew on here if you can track the questions of long-term human behaviors behind the adolescent hijinks of the crew—which increasingly begin to look like Greek Life on campus with the additional bout of mayhem and murder. What’s important is not the outcome of the specific plotlines related to the crewmembers, as we are not all that invested in them, but the question of mission success and, more overarching, human behavior. Beneath it all is the question of what will we take with us when we leave Earth? Will people generally rise to a Star Trek-like utopian existence, or will we default to cruder base behaviors more in line with The Expanse? I think you can guess where the story takes us.

In the end (spoiler warning number two), we cut to 86 years post-launch and see the new world looming ever larger in the viewport. There are many gray heads and people of all ages crowding the window as we near Planet X, and that is where the film leaves us—we know they made it and that presumably all will be well when they land. We intuit that everything worked out acceptably well and that the crew overcame their tensions and divisions to survive the long, arduous (and some might say poorly designed) journey. But the big stone left unturned here is: at what cost? Would their journey have been more successful in the whole if they had remained drugged, overturning their lower impulses (such as violence and reproduction), or have we learned that humans must be humans to survive in space? That question is also left to the viewer to answer.

There are other disturbing undertones I’ve glossed over, such as the plot-inciting notion of a modern Lebensborn culture (a WWII-era Nazi program of controlled breeding to create the perfect Aryan) that bred the voyagers in the first place; the dark off-screen presence of the cold-hearted scientists and mission mangers who originally designed the journey, and multiple scenes of hedonistic mayhem as teenagers discover the joys of forbidden fruit in the form of sex. The visuals are not for everybody.

There’s more to unpack here, but ultimately the film is a brooding reflection of human needs overlaid with action and sexual tension. It does provide a somewhat compelling meditation on the human condition as played out against the panorama of long-duration spaceflight and space settlement, but as mentioned, any answers will come from you.

In what is perhaps the most seminal moment of the film, the kids are reviewing Richard’s personal video logs after his death. After seeing images of Richard’s family left behind and hearing his ruminations on why he chose to leave Earth forever, Richard says, “It’s a noble mission in the great tradition of exploration … what’s out there, why are we here, where are we going?” These are some of the questions that advocates of human exploration ask themselves, and the same questions are used as foils when we find our most closely-held values questioned by those who are not convinced of the value of the human migration into space. While not a sufficient set of answers, when combined with the larger questions posed by Voyagers, it may be a jumping-off point for deeper introspection.