With a successful launch on April 8 at 4:43 PM EST, 2016 SpaceX achieved several dramatic milestones on their first supply run to the International Space Station (ISS) following the loss of a Falcon 9 in June of 2015. For the first time ever, the first stage of a rocket both returned intact to Earth and landed on a drone ship at sea. This new capability will enable lower-cost access to space by saving the fuel otherwise needed to fly the first stage back to the launch site, which SpaceX has previously demonstrated. 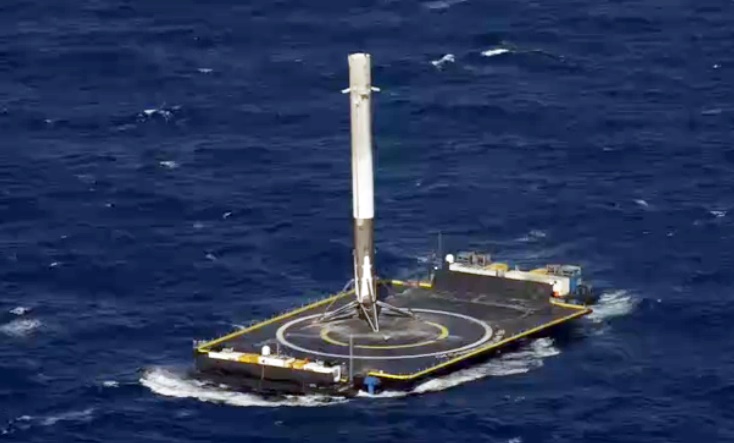 In addition to this remarkable achievement, the Falcon 9 lofted the Cargo Resupply Services 8 mission (CRS-8) to the ISS. This is the 10th flight of the Dragon spacecraft. Once the Dragon docks at the ISS, for only the second time ever there will be six spacecraft attached to the ISS (Dragon CRS-8, Cygnus CRS OA-6, two Progress, and two Soyuz lifeboats). The Dragon contains a variety of experiments, including a cargo of live rats which will be used to test drugs that may combat the weakening of bones in space and on Earth.

In addition to pressurized cargo in the Dragon, an unpressurized “trunk” houses the 1,413 kilogram Bigelow Expandable Activity Module (BEAM), an inflatable module that will be attached to the ISS for two years to test this new technology. The module, once inflated, will be 13.2 feet by 10.6 feet, and will provide a total volume of 564 cubic feet.

“In this mission it is hard to know what to be the most excited about,” said Dale Skran, NSS Executive Vice President. “SpaceX continues to break new ground in lowering the cost of going into space, and the drone ship landing is key to maximizing the amount that can be lifted into space by a first stage that is flying back to Earth. BEAM will pave the way for more affordable future commercial and deep space stations.”

Recently Blue Origin re-used its sub-orbital New Shepard booster on a flight to the Karman line (the edge of space) for the third time and returned the rocket to its launch site for further re-use. “Competition like that seen between Blue Origin and SpaceX is the key to rapid progress in space,” said Bruce Pittman, NSS Senior Vice President. “NSS has strongly supported competition in both the NASA Commercial Re-supply Services program and the Commercial Crew program. Today’s drone ship landing is a direct result of the competitive, commercial nature of these efforts, and NSS advocates extending these types of programs into cis-lunar space.”

Lowering the cost of access to space is key to NSS’s vision of our future in space (see www.nss.org/settlement/roadmap) and today’s events have brought that future materially closer.