When King Harry of England fought the French at Agincourt, he was vastly outnumbered by an army that was largely made up of mercenary forces.

In some regards this is similar to the February 2007 Space Budget Blitz. A small band of space advocates went to Capitol Hill, where as is usually the case, we were vastly outnumbered by high priced lobbyists and political power-players. Although we didn’t have as decisive a victory as King Harry, the 2007 Space Budget Blitz was an unqualified success.

Over two days, the National Space Society (NSS) spoke to more than sixty members of Congress, including new members, appropriators, and authorizers, as well as Congressional leadership. This included face to face meetings with Representative Ralph Hall (R-TX) and Representative Nick Lampson (D-TX) as well as speaking to staffers from the offices of Senator Hillary Clinton, Senator Barack Obama, Senator Joe Lieberman, and many others. 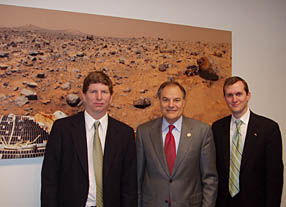 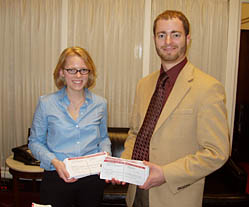 Kevin Sloan hands petitions to one of Senator Obama’s staffers. 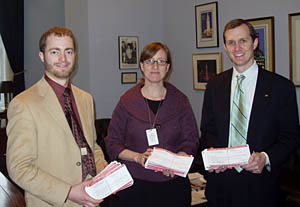 Kevin Sloan and George Whitesides hand petitions to one of Nancy Pelosi’s staffers.

The timing of this event couldn’t have been any better. The 2008 budget was released the previous week and the Senate was debating the Joint Resolution that cut $500 million from NASA’s original 2007 budget. Despite the fact that the Joint Resolution passed the Senate, we were pleased to find that there is still a lot of support for NASA in the United States Congress and that many members will be pushing hard to make sure that NASA gets at least the 3.1 percent increase (over the 2007 budgeted amount) that is included in the recently released 2008 budget.

According to Blitz Co-Chairman, Rick Zucker: “It was extremely gratifying to hear of the great interest and respect held by many members of Congress for NASA and for space exploration and development in general. At the same time, however, our meetings provided a unique opportunity to obtain crucial information as to the demands that are currently being placed on Congress regarding the allocation of scarce resources among competing interests. The Blitz showed the importance of maintaining the lines of communication between the space community and Congress to ensure that adequate funding is appropriated for the Vision for Space Exploration and other space-related programs.”

Fear of the “Gap”

One of the concerns that we continually heard during these meetings was a growing anxiety about the four-year gap between the retirement of the space suttle fleet and the scheduled operation of the replacement vehicle. It was apparent that a number of Representatives are getting more uncomfortable with the fact that the United States will be unable to launch humans into orbit for such a long period. This fear was compounded by China’s recent launch of an anti-satellite missile. It will be interesting to see if the apparent Iranian launch will even further magnify this Congressional angst over the “gap.”

The talking points that we were promoting included language that discussed the following topics:

The recent changeover in Congress presented many challenges. Although both parties boast numerous supporters of space exploration, we entered these meetings with little or no idea of where most of the new members stood on space exploration issues. As we were setting up the meetings, many of these offices hadn’t even finished hiring staffers and weren’t sure who was going to deal with science and space issues. Despite these complications, our meetings went very well.

According to NSS Executive Director, George Whitesides, “The staffers are always impressed by the passion and knowledge of the NSS members visiting Capitol Hill. It was critical that the new Congress hear from citizens right at the start that space must be a priority for their coming term.”

This activity was just one of many that NSS and other organizations plan to conduct over the upcoming year. Only through constant contact with our elected officials can the space advocacy community help guarantee that the Moon and Mars do not get dropped as Congressional priorities. In order to truly have the impact that we desire we need more people to come out and join us for future trips to Capitol Hill. Don’t be shy! Not only can you influence the United States government, but you can have a LOT of fun doing it. To quote a line from Shakespeare’s HENRY V, if we succeed in these efforts, we “will be remembered.”

Chris Carberry is a Board Member of the National Space Society and Chairman of the 2007 Budget Blitz.