With a successful launch on December 21 at 8:29 PM EST, 2015 SpaceX achieved several dramatic milestones while returning to flight following the loss of a Falcon 9 last June. Eleven ORBCOMM OG2 satellites were delivered to orbit to complete ORBCOM’s global data network. A new version of the Falcon 9 was launched from Space Launch Complex 40 at Cape Canaveral Air Force Station, Florida. The updated Falcon, which is internally referred to as “Falcon 9 V1.1 Full Thrust” features super-cooled liquid oxygen propellant, an additional 1.2 meters of height, and the use of full-thrust Merlin engines. These changes have been made to enhance the ability of the Falcon 9 first stage to return to its launch site following the launch of a geosynchronous satellite. Finally, and most importantly, for the first time ever the complete first stage of an orbital rocket was successfully flown back to the launch site and landed intact.

“This is a game-changing event,” said Dale Skran, NSS Executive Vice President. “Never before has the entire first stage of an orbital rocket been returned to its launch site for potential re-use. SpaceX has challenges ahead to demonstrate that re-used first stages can significantly lower launch costs, but this could be the beginning of the true age of practical space commerce. NSS thanks the Air Force, Sierra Nevada, ORBCOMM, and the FAA for their essential support of this outstanding SpaceX mission. It was a true team effort.” 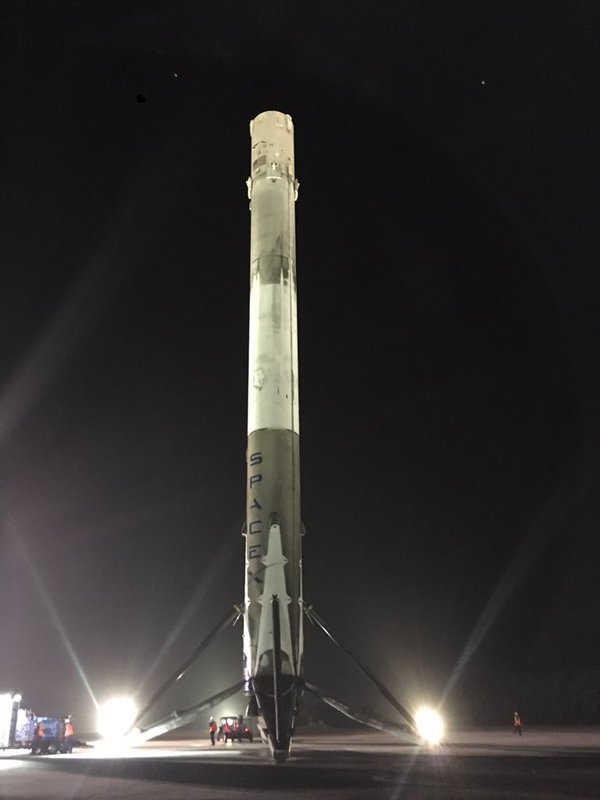 Recently Blue Origin flew a sub-orbital booster to the Karman line (the edge of space) and returned the rocket to its launch site for potential re-use. SpaceX has bettered this valuable achievement by returning a first stage from much higher altitudes and faster speeds. “Competition is the key to rapid progress in space,” said Bruce Pittman, NSS Senior Vice President. “NSS has strongly supported competition in both the NASA Commercial Re-supply Services program and the Commercial Crew program. Today’s success is a direct result of the competitive, commercial nature of these efforts.”

“NSS congratulates SpaceX on this incredible achievement,” said Mark Hopkins, NSS Executive Committee Chairman. “It took enormous courage and confidence to continue forward with rapid technical innovation following a loss of mission incident. The effect of this event, both long and short term, promises to be world-altering. We can now see the NSS vision for our future in space (nss.org/settlement/roadmap) coming ever closer to becoming reality.”