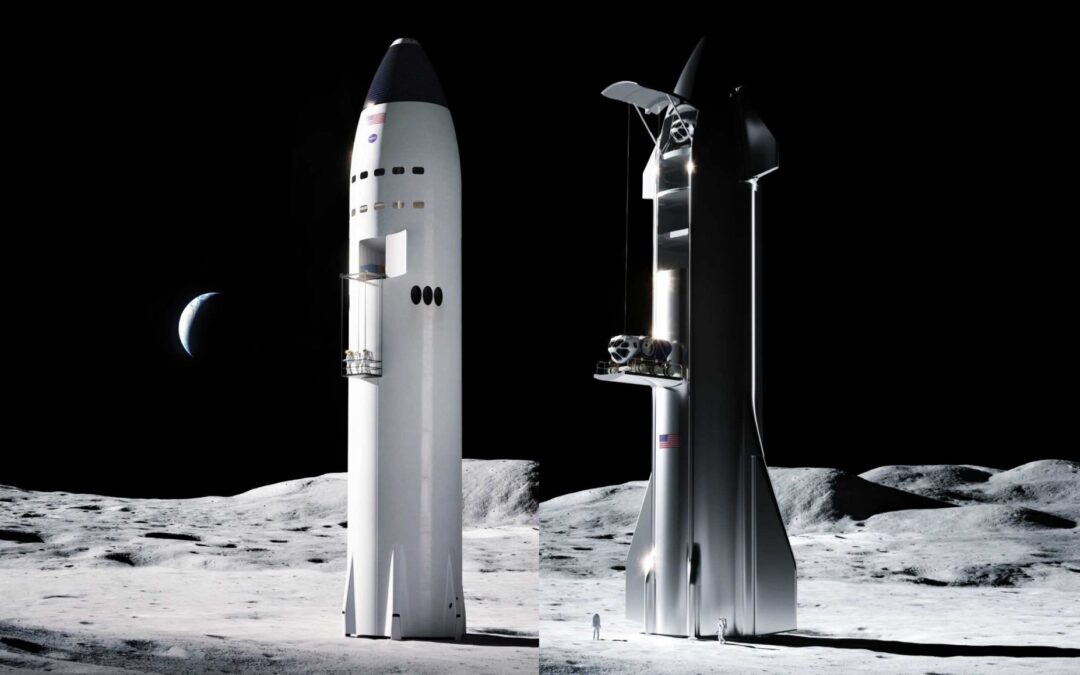 Image: To left, SpaceX’s lunar Starship is seen next to the baseline design now being tested. Credit: SpaceX.

The National Space Society strongly supports NASA’s choice of SpaceX to perform the first crewed lunar landings in 50 years as part of the Artemis program. SpaceX’s giant Starship spacecraft, prototypes of which are already being tested by SpaceX at the company’s own cost, will be used to ferry astronauts from lunar orbit to the Moon’s surface and back with astronauts flown from Earth to lunar orbit by NASA’s Space Launch System and Orion spacecraft. The $2.9 billion contract leverages the work that SpaceX has already performed on Starship, saving the U.S. large amounts of tax dollars.

“The spaceflight community has been waiting half a century for this,” said Anita Gale, NSS CEO. “Every contract NASA grants to a commercial company to develop space infrastructure is another step toward expanding the human presence into space. In this case the key infrastructure element is that for the first time NASA will use in-space refueling for beyond Earth orbit transportation. This advance is a vital part of the goal of making lunar resources and cislunar space accessible for the benefit of all.”

In the past most NASA spacecraft were built by aerospace contractors, but this new contract award follows the Commercial Resupply Services and Commercial Crew model successfully implemented since the retirement of the space shuttle in 2011. SpaceX has been developing, and more recently flying, Starship prototypes for years. This has been accomplished independent of government funding with SpaceX underwriting the venture. The new Human Landing System contract will be similar to how the Falcon 9 and Dragon capsule were developed, with both NASA and SpaceX funding the effort. Those commercially owned and operated craft were estimated by NASA’s own studies to have cost well less than half of what they might using more traditional contracting arrangements. New to this agreement, however, is that this system will be developed to carry humans from the start.

“This contract award represents a bold step for NASA,” said Dale Skran, the Senior Operating Officer of NSS. “Working with SpaceX brings the strength of dynamic entrepreneurship to the lunar landing program while integrating with NASA’s existing infrastructure and the Space Launch System/Orion combination. NSS strongly supports this kind of collaboration, and we look forward to other commercial providers being brought into the lunar flight ecosystem soon.”

NASA has in the past awarded two or more contracts for a commercially procured flight program, as was the case with SpaceX and Boeing for flying crews to the International Space Station under the Commercial Crew Program. Friday’s announcement, however, made it clear that due to budget shortfalls there was only enough money to award a single contract, in this case to SpaceX. Blue Origin’s “National Team” and Dynetics had been hoping for similar awards.

“In the end, everyone wins when there is competition and redundancy in the system,” Jeremy Wainscott, NSS Executive Vice President and Chair of the NSS Policy Committee. “We hope Congress will send NASA sufficient funding to support a second contractor to provide assured and safe access to the surface of the Moon by our astronauts. Additionally, the competition should be expanded to include companies like Masten and Astrobotic that are providing landers for NASA’s Commercial Lunar Payload Services program, which will start landing on the Moon later this year.”

Bruce Pittman of the NSS Board of Directors added, “This is perhaps the most daring step we’ve seen NASA take since the announcement of the flight of Apollo 8 to lunar orbit in 1968, and the boldest announcement since JFK’s Moon speech at the dawn of the Space Age. SpaceX has designed and is maturing an innovative and robust technology that allows for orbital refueling and massive movement of cargo and personnel to the lunar surface and back, and both are critical to NASA’s lunar efforts.”

While still publicly adhering to the goal of sending the first woman and first person of color to the Moon by 2024, it is unclear when the first landings will actually occur. However, by adopting a system already in the test phase, NASA has likely accelerated the odds of a landing near that date.