National Space Society Congratulates NASA/JPL on the Flight of Ingenuity 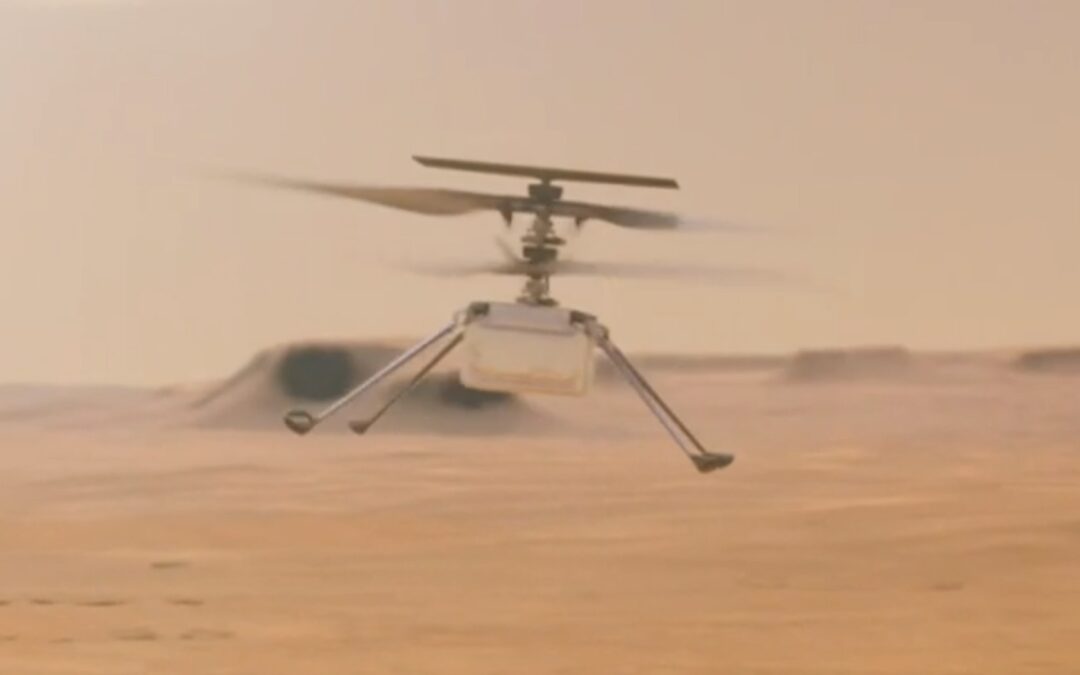 The National Space Society extends its heartiest congratulations to the team behind the Mars helicopter Ingenuity, the Perseverance rover, and the infrastructure orbiting the Red Planet. For a dazzling half-minute, Ingenuity rose about 10 feet above the Martian surface, imaging the terrain below. From a nearby overlook, Perseverance took video of the historical event.

“This is truly history in the making,” said Anita Gale, the NSS CEO. “Engineering calculations and modeling have shown for years that powered flight on Mars is possible. Actually getting it to work on the very first try is a huge accomplishment.”

While Perseverance landed two months ago, it took time to get the rover checked out and ready to go. It then drove to a flat area that provided a safe test zone for Ingenuity, dropped off the helicopter, then backed off to a nearby hill to watch from. After an aborted test a week ago, engineers at NASA’s Jet Propulsion Laboratory performed troubleshooting and eventually uploaded a software update to the tiny 4-pound helicopter, leading to a successful test in the early morning hours on Monday.

Dale Skran, NSS Senior Operating Officer, noted, “There have been plans that included everything from powered balloons to winged airplanes to explore Mars over the past few decades. Few were bold enough to envision a rotorcraft that could successfully fly there. The JPL team should be lauded for their incredible tenacity in bringing this program to fruition.”

Flying anything on Mars is a major challenge as the atmosphere is just one percent the density of Earth’s—very nearly a vacuum. Ingenuity’s twin four-foot rotors must spin rapidly—about 2500 revolutions per minute—to claw into the thin air.

“Having a rotorcraft on Mars is a great beginning to expanded exploration,” said Rod Pyle, Editor-in-Chief of the NSS’s signature magazine, Ad Astra. “Autonomous aircraft like Ingenuity will be able to provide views of potential targets—and possible dangers—ahead of the rover, and will be an incredible aid to exploration and mission safety moving ahead.”

The $85 million program was a decade in the making, as it moved from a small team’s unlikely notion, through prototyping and testing, and ultimately to full mission approval. The final prototype was built in just 11 months—“That was just nuts,” said JPL project chief Mimi Aung, who added, “[But] we can now say human beings have flown a rotorcraft on another planet.” There were a lot of bumps along the way, including frustrating hours in JPL’s vacuum chamber, trying to get the machine to fly straight and land upright. But they prevailed in the end.

“Proving powered flight is possible on Mars is another step toward exploring the entire landscape and eventually establishing human settlements there,” added NSS CEO Gale. “This is the beginning of an entirely new and revolutionary chapter of planetary exploration, and NSS looks forward to supporting each step along the way.”

In a further demonstration of the intelligently planned infrastructure now working at Mars, the signals from the tiny helicopter were relayed first to the rover, then to a NASA mars orbiter before being dispatched to Earth where they were received by NASA’s Deep Space Network of radio dishes. “It’s an elegant display of engineering brilliance,” added Skran.

The recorded livestream of the first flight of Ingenuity can be viewed here.