The Gerard K. O’Neill Memorial Award for Space Settlement Advocacy honors those individuals who have made outstanding contributions to the advancement of human space settlement. These contributions can include support and development of space settlement through communication of the vision, technical advances, basic scientific research, economic strategies and analysis, legislative and regulatory support, or education and inspiration. The award is named in honor of Dr. Gerard K. O’Neill, whose vision of human space settlement inspired the formation of the L5 Society, a founding partner organization, with the National Space Institute, of the NSS. These awards, started in 2007, are given at irregular intervals as warranted. The awards are cast in the shape of a Bernal Sphere space habitat design. 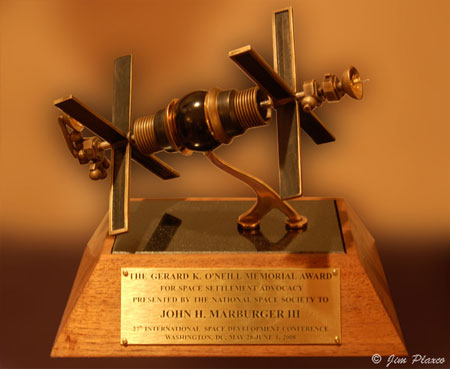