The National Space Society (NSS) is launching a new project called “Enterprise In Space” (EIS).  This project will design, build, launch, orbit, re-enter, tour, and display a science-fiction-inspired satellite as a science education and technology demonstration project for all ages and as a tribute to the great visionaries of science and science fiction.

Inspired by the classic science fiction writers of the 20th century including Heinlein, Clark and Roddenberry, the EIS project is a grassroots effort by a dedicated team of aerospace, information technology, and education veterans. The goal of the EIS project is to launch an orbital mission by 2019 that will carry 100 or more competitively selected student experiments from around the globe, and to test out new space technology. This is an opportunity for people to directly support something truly historic. EIS will reach out to people with interests in space, science, education, astronomy, cosmology, and science fiction.

A three-minute video explains the entire idea at the Enterprise in Space website (www.enterpriseinspace.org).

“The National Space Society is proud to launch the Enterprise in Space project to the world,” said National Space Society Senior Vice President Bruce Pittman. “This is an opportunity for people worldwide to come together to help transform this exciting concept into a remarkable reality. EIS is yet another example of the burgeoning free enterprise use of space.”

What began as a dream by Oregonian science fiction and space enthusiast Shawn Case four years ago is now a major NSS project. Case and his team have prepared a well-defined project plan to launch an orbiter dubbed “NSS Enterprise,” with its artistic design to be conceived by a public competition. The spacecraft will re-enter from orbit for retrieval, go on a tour along with the results of the student experiments, and ultimately be displayed in a major museum along with the names of all who helped fund it.

Case has assembled a professional team skilled in project management, aerospace, social media, and education to carry out the project. Case believes that giving each donor the opportunity to be a virtual crew member and get his or her name on an electronic chip to be carried aloft on this historic flight will greatly increase interest in the project and in space exploration.

Famed Apollo 11 moonwalker and NSS Governor Edwin “Buzz” Aldrin endorses EIS: “There’s an exciting new project called Enterprise In Space that I want to tell you about. Together with the National Space Society, the Enterprise In Space project will launch an eight-foot Enterprise satellite into orbit and bring it back to Earth. This is an educational and inspirational tribute to all Enterprise ships in history, to science visionaries, and to the vision of the Great Bird of the Galaxy himself, Gene Roddenberry. My name has been to space and back. Now it’s your turn. Rendezvous with me and support the Enterprise in Space project. Help make history all over again.” 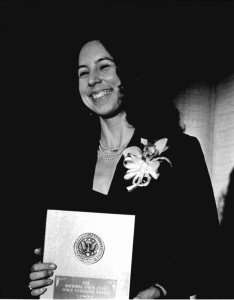 Proposals for experiments to be flown on the orbiter will be sought from students of all nations and ages, from kindergarten through university. Lynne F. Zielinski, a national award-winning educator, NSS Director and Vice President of Public Affairs, will head the EIS education team. “In my 32 years of teaching, I have worked with hundreds of students to send experiments aboard six space shuttle and nine NASA sub-orbital rocket flights,” Zielinski said.  “Students really have a lot to offer. I’ve seen the potential of students when they’re excited about being a real part of space flight exploration. Age is no barrier. They quickly adopt cutting-edge ideas and technology.”

The project’s appeal to those interested in space, science, and education goes hand-in-hand with its appeal to science fiction fans, many of whom have a naturally optimistic view of the future and of humans living and working in space–the goals that NSS has promoted since its founding.

Great visionary science fiction writers created hopes that people would be on the Moon and on the way to Mars by now. Let’s help to turn science fiction into science reality, bridging the conceptual gap through education, imagination, and inspiration. Through real-world enterprise, the people of Earth will contribute to the vision of Enterprise In Space.