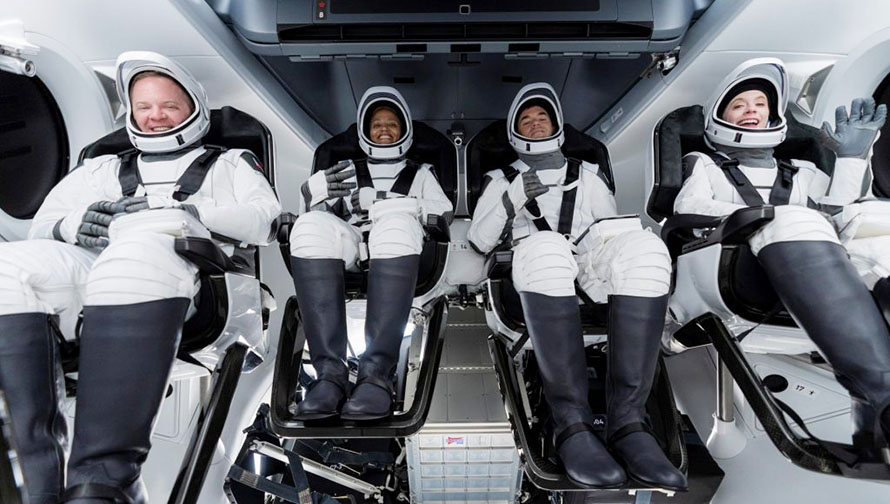 This week marks the launch of the first all-civilian orbital spaceflight, Inspiration4, aboard a SpaceX Crew Dragon capsule. “The flight of Inspiration4 is one of many firsts,” said Michelle Hanlon, president of the National Space Society (NSS). “The name ‘Inspiration’ is well chosen; the charitable nature of this undertaking is remarkable and truly a sign of the new space age; one of increasing civilian participation at ever reduced cost—these are not professional astronauts, but people like you and me, flying into orbit for three days. We anticipate an increasing tempo of similar space efforts in the near future, opening a new frontier of human endeavor.”

The Inspiration4 mission is the brainchild of billionaire entrepreneur Jared Isaacman, 38, who formulated the flight as a fundraiser for St. Jude’s Children’s Research Hospital. “We do firmly believe that there is going to be a world, 50 or 100 years from now, where people are going to be jumping in their rockets like the Jetsons … If we can accomplish all of that, we sure as heck better tackle childhood cancer along the way.” Isaacman has committed to raising at least $100 million for St. Jude’s.

There are many other firsts for this flight. “This is the first time a group of civilians—not active military and not spaceflight professionals—have flown into orbit without an astronaut. It’s also the first time a person with a prosthetic implant has flown into space, the first mission in a decade that a spaceflight has not headed for a space station, and many other firsts,” said Rod Pyle, Editor-in-Chief of the NSS magazine, Ad Astra.  “Perhaps most importantly, it’s the first space mission dedicated to a charity, St. Jude’s Children’s Research Hospital, a trend we’d like to see continue.”

Besides Isaacman, the crew includes Hayley Arceneuax, 29, a physician’s assistant at St. Jude’s; Dr. Sian Proctor, 51, a geoscientist and space educator, as well as only the fourth African American woman to fly in space; and Chris Sembroski, 41, a data engineer at Lockheed Martin and air force veteran, who has been passionate about space for decades.

“Chris Sembroski earned this ticket to space back in 1998.  Without Chris, and several dozen of his friends, SpaceX might not exist today,” said Charles Miller, a serial space entrepreneur, former NASA advisor, and longtime spaceflight advocate. “Chris was an active member of ProSpace, a grassroots citizens lobby, and participated in the 1998 March Storm, in which private citizens took off time from school and work to brief over 200 Members of Congress about the Commercial Space Act of 1998, which enabled the formation of companies like SpaceX and others.” The March Storm movement continues to this day, led by the National Space Society and the Space Frontier Foundation, with hundreds of others like Sembroski participating annually.

“March Storm is one of the many pro-space activities that groups like NSS use to encourage Congress to do the right thing and accelerate our movement into space,” said Dale Skran, NSS Chief Operating Officer. “It, and other activities like it, can make all the difference. NSS is proud to have someone from March Storm flying into space as an example of how regular people—folks like you and me—will soon be traversing the final frontier routinely, and just as importantly, having an impact on creating our future as a spacefaring civilization,” he added.

This first all-civilian orbital flight is just one step in the NSS Roadmap to Space Settlement.