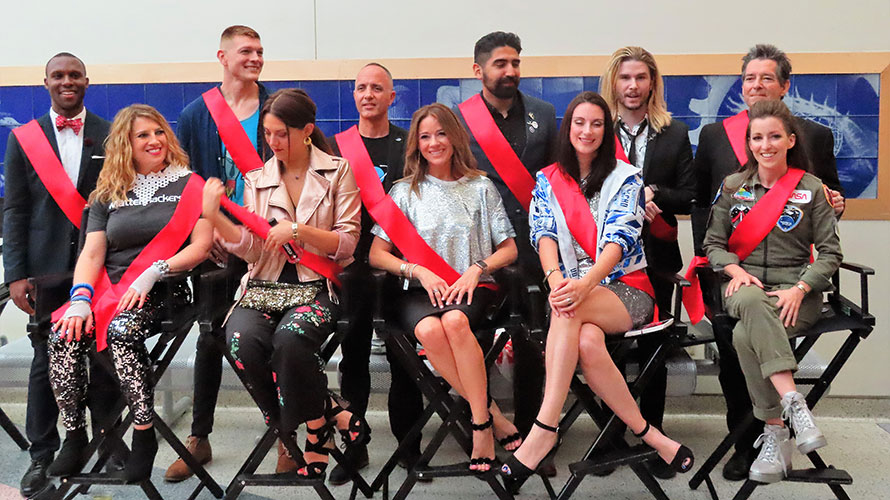 Yuri Gagarin became an international hero when he rocketed into space on April 12, 1961, becoming the first human to orbit the Earth. His pioneering journey opened the era of human spaceflight. Today, this era is poised for a renaissance as NASA, space entrepreneurs and many international space agencies prepare for a renewed age of human spaceflight.

In observance of this, worldwide celebrations occur on or about April 12 each year. This year on the evening of April 6, more than 1500 space enthusiasts, scientists, engineers and entertainers gathered in Los Angeles at the California Science Center for Yuri’s Night, a global celebration of Gagarin’s legacy and our future in space.

The National Space Society was a sponsor for Yuri’s Night and NSS President Geoffrey Notkin served as one of the evening’s VIP Ambassadors (pictured above, with Notkin at upper right). For those of you unfamiliar with Yuri’s night, it is a magical blend of lavish celebration and space expo. Participants gathered under and around the space shuttle orbiter Endeavour to listen to special guest speakers that included NASA astronaut Story Musgrave, the Planetary Society’s Bill Nye and Mark “Forger” Stucky, Virgin Galactic’s first pilot astronaut.

The event featured a top-notch DJ and dancing, a costume contest, a space art display and many exhibitors featuring the latest in space technology. Guests had a chance to mingle with VIPs and speakers, and to share their visions and dreams of a spacefaring civilization. This year’s Yuri’s Night party also paid tribute to the 50th anniversary of Apollo 11 and the historic first landing on the Moon.

Notkin noted that the evening was “a coming together of everyone who believes passionately in the idea that the human race deserves more than just staying on the surface of this little planet where we grew up.” Notkin’s remarks were a perfect opportunity to engage the crowd as he shared the NSS vision for space settlement. “The goal is to live, work, and settle permanently into space,” said Notkin to the enthusiastic attendees.

Yuri’s Night was a reminder of the great space accomplishments of the past, but perhaps more importantly, serves as to excite and engage the public in the wonders of spaceflight, the settlement of the solar system, and a future where space is for everyone.