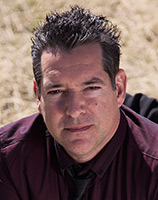 Geoff Notkin, host of Meteorite Men, was recently named to the National Space Society’s Board of Governors. “NSS is proud to have Geoff on our board to help promote our vision of a spacefaring civilization,” said Bruce Pittman, NSS chief operating officer.

The NSS Board of Governors provides recommendations and guidance to the Board of Directors with respect to the broad, overall policies, objectives, and goals of the Society. The board is composed of prestigious leaders in their respective fields who have made outstanding contributions to the Society or its goals. Geoff Notkin’s appointment was made official at the May 2015 National Space Society Board of Directors meeting in Toronto at the International Space Development Conference.

Along with hosting his own television series, Notkin has been featured on documentaries for National Geographic, Discovery, PBS, the BBC, The History Channel, A&E, and The Travel Channel.  He has appeared on NBC’s TODAY show, the nationally syndicated radio show Coast to Coast AM, and has been interviewed by The Washington Post, The Huffington Post, Space.com, Universe Today and many other leading sites and publications. An in-demand public speaker and science popularizer, Notkin is a frequent guest at space and science conferences around the world.

The search for rare and valuable space rocks has taken Notkin to 45 countries and some of our planet’s most remote areas, including northern Siberia, Chile’s Atacama Desert, the Australian Outback, and he has three times crossed the Arctic Circle. He is currently filming a new adventure series, Meteorite Hunters Unlimited, with longtime expedition partner Steve Arnold.

Geoff Notkin is also an award-winning author and has written hundreds of published articles on meteoritics, paleontology, astronomy, adventure travel, history, and the arts, with his work appearing in Astronomy, Astronomy Now, Sky & Telescope, USA Today, Wired, Reader’s Digest, American Digger, and many other national and international publications. He is the author of the books Meteorite Hunting: How To Find Treasure From Space and Rock Star: Adventures Of A Meteorite Man (featuring an original introduction by Geoff’s lifelong friend Neil Gaiman), and a science and arts blog, The Logical Lizard, at www.geoffnotkin.com.

Notkin has worked with many of the world’s major institutions including the American Museum of Natural History, New York; the Natural History Museum, London; and the Center for Meteorite Studies at ASU in Tempe, Arizona. He is a member of The Explorer’s Club and serves on the Board of Directors of the Astrosociology Research Institute and the Board of Advisors of Deep Space Industries.

The minor planet 132904, discovered at Mount Palomar, was named “Notkin” in recognition of Geoff’s contributions to science, the arts, exploration, and education.