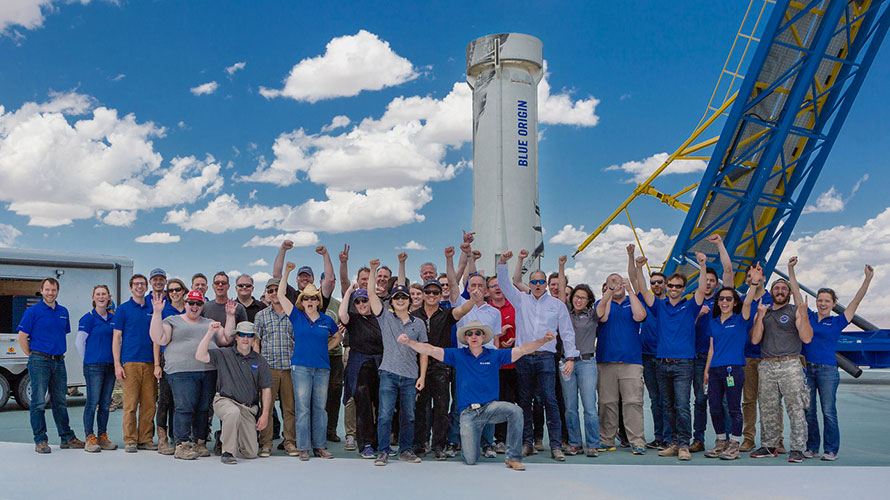 An important milestone in the competitive run-up to the start of space tourism was accomplished this morning by Blue Origin at their West Texas launch site. Mission Nine—the successful ninth flight in the series of New Shepard space ship flights—launched at 10:11am CDT with the capsule reaching an apogee of 119 km (389,000 ft or 73 mi), well above the 100 km boundary of space, followed by the safe return landings of both the New Shepard booster rocket and payload capsule after 11 minutes of flight. Video of the flight can be viewed at www.blueorigin.com.

“We’ll be doing a high-altitude escape motor test—pushing the rocket to its limits,” the Blue Origin company stated yesterday (via Twitter). The prime focus of the mission was again safety testing, most importantly the successfully completed firing of the capsule’s solid rocket escape motor shortly after separation from the booster at 250,000 ft. The capsule continued to its apogee in space at which point its mini control thrusters were successfully tested, assuring a stable upright return to Earth.

This was the third re-flight of the New Shepard 3 (NS3) rocket and Crew Capsule 2.0, the newest generation. The flexibly configured capsule carried a manifest of educational and commercial science experiments as well as the instrumented dummy creatively named Mannequin Skywalker. While Mission Nine was the third such flight carrying research payloads from paying customers, the capsule interior will be outfitted to carry up to six human passengers in upcoming flights.

The Blue Origin space development company, founded by Amazon.com founder and CEO Jeff Bezos, is in competition with Virgin Galactic, founded by Sir Richard Branson, in the startup suborbital space tourism business. Within the last two weeks the price range of a ticket for a suborbital ride to space on Blue Origin’s New Shepard has been rumored will be sold next year for between $200K and $300K, which is close to the $250K that Virgin Galactic is charging for a suborbital ride to space aboard their air-launched SpaceShipTwo rocket ship. Reputedly Virgin has sold about 650 tickets.

Both companies expect to launch their first human passengers in test flights in the remaining months in either 2018 or in early 2019. NSS members eagerly look forward to upcoming flights of Blue Origin’s New Shepard and Virgin Galactic’s SpaceShipTwo, especially with human passengers on board.