Las Cruces, New Mexico – October 17, 2012 – The National Space Society (NSS) and the New Mexico Museum of Space History (NMMSH) announced a new partnership on Wednesday for the establishment of a permanent home for historic records chronicling the development of the space activist community and the U.S. space industry.

This alliance is the result of four years of discussions and negotiations about the disposition of the Society’s archives (which go back as far as the mid-1970’s when Wernher von Braun founded the National Space Institute, a predecessor of NSS) and will officially enable the Museum to begin accepting materials from the Society.

Dale Amon, Chairman of NSS’s Archives Committee and a member of the NSS Board of Directors, announced the new partnership at the International Symposium for Personal and Commercial Spaceflight (ISPCS). Amon stated, “If we do not save our history, it will be rewritten by others. It is up to us, the founders of the Space Movement and dedicated advocates of the space industry, to make sure there is an unambiguous record of how the future came to be and the huge role we played in it.”

“It is a rare privilege to have our Museum chosen to conserve and protect the National Space Society Collection. Current and future historians will find that this Collection provides an uncommon insight into the hearts and minds of the activists who founded what is known today as the commercial space industry,” said Chris Orwoll, Executive Director of NMMSH. “The Museum’s partnership with the National Space Society will ensure that this Collection, reflecting decades of dedication to opening space for all, will be preserved to provide understanding and education for future generations.” 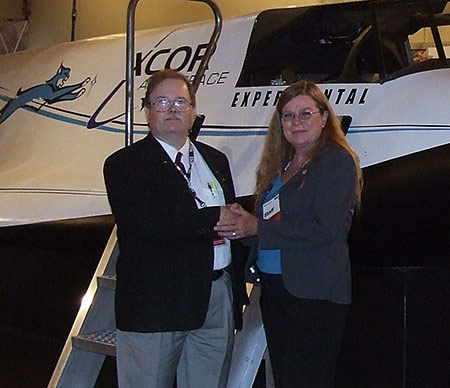 Amon and Orwoll also expressed their appreciation to ISPCS organizer Pat Hynes for her foresight in creating an event that fosters communication between different organizations and promotes partnerships throughout the space community.

New Mexico’s Spaceport America, the first commercial spaceport in history, is a major outcome of decades of work by space advocates at NSS and other like-minded citizens. The Museum project will not only detail that past effort, but document and preserve the evolution of space travel in the exciting years to come.

About the New Mexico Museum of Space History: The NMMSH is charged with collecting, researching, and preserving objects (artifacts and specimens) and documents related to its mission which is, in part, to educate its visitors from around the world, in the history, science, and technology of space. The museum’s Collections Management Program ensures proper accountability of the objects entrusted to its care, for the sake of posterity, and for the benefit of its constituents and clientele. This is accomplished through sound documentation; meticulous record keeping; collections-oriented research; artifact preservation/conservation; and strict compliance with the NMMSH Collections Management Plan policies/procedures and American Association of Museums (AAM) standards and guidelines. Located in Alamogordo, New Mexico, at the base of the Sacramento Mountains, the Museum is a tribute to the brave men and women who for centuries strove to conquer space. The Museum is a division of the New Mexico Department of Cultural Affairs.