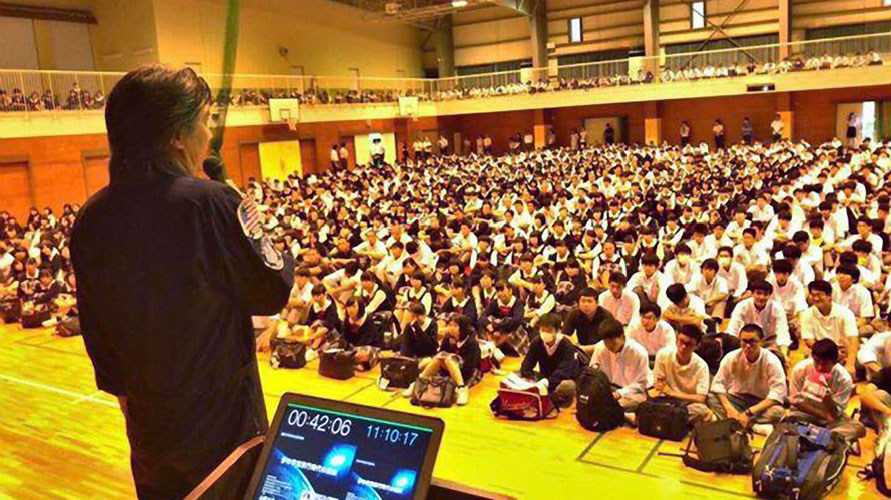 Contrary to our name, NSS is a very international organization. Taichi Yamazaki, President of the NSS Japan Chapter and CEO and Commercial Astronaut of ASTRAX, Inc., spoke to the entire student body of 3000 at Urawa Gakuin High School (pictured above) on the topic “Dream Space Travel Era Is Coming!” There was not a room large enough so he gave two talks for 1500 students each. It was a remarkable sight: 1500 young people sitting cross-legged on the floor wearing white shirts or black sweaters, bent over laptops set on very low tables like footstools. Mr. Yamazaki has in total spoken to over 100,000 adults and students. Those of you who went to ISDC this May might remember the extensive talks and cultural programs provided by the Japan chapter.

When the Nashik, India chapter requested a speaker from National Space Society leadership for their week-long World Space Week celebration, the first response was regret—no funds or time available for international travel. Then someone noticed that this is the 21st century. Primarily-satellite-based live communication is now available around the globe in accordance with this year’s “Space Unites the World” theme. Since Nashik is almost exactly on the other side of the planet from the U.S. Pacific coast, a special “virtual” Chapters Assembly via Zoom software is planned for Saturday, October 6th from 7:30-9:30 PM Nashik time. That will be 7:00-9:00 AM in California, 10:00 AM -12:00 noon in New York, 4:00 -6:00 PM in Germany, 10:00 PM-12:00 AM in Japan (sorry!), and so on. Participating chapter representatives will briefly discuss a few space-related topics.

That’s not all! The Nashik chapter’s celebration runs for 7 days, October 4th-10th. They’ll stream all programs live, including a First Day Rally of 1000 students and prominent dignitaries wearing special NSS logo T-shirts. Space experts from India will speak in person or virtually during the week. Several NSS members will make live virtual presentations on various topics: Sacramento L5 President Joe Bland on “Settling Space: A Practical Approach;” Mars Foundation founder and Chapters Committee member Bruce Mackenzie on “Living on Mars;” and Oklahoma Space Alliance President David Sheely on “Technical Readiness.” Anne Watkins of NSS will pre-record a talk on “Spaceport America” and send it via cloud to be played on a suitable day. So far, this event involves NSS chapters in Asia, Europe and North America. If all those invited participate—Africa, Australia, and South America could also be involved—all six permanently inhabited continents may be included. Watch for the event schedule and log-in details about a week before things start!

Each year the Frontiers of Flight Museum and the National Space Society of North Texas collaborate to present the biggest annual space exposition in the State of Texas—MOON DAY! Held again at the Frontiers of Flight Museum, Love Field, Dallas on July 21st, this year’s activities focused on current and future space exploration and STEM events. Over a thousand children, parents and other adults enjoyed the museum’s OmniGlobe® interactive display, lunar samples from NASA, Moon Academy, Lunar University, and Teacher Professional Development Classes, as well as activities aimed at earning Boy Scout badges and Girl Scout patches. Classes by the Dallas Area Rocket Society offered the opportunity to build and launch one’s own model rocket and sold out before the doors opened. The museum added a “Sneak Preview” of their October 20th celebration for the Apollo VII 50th anniversary.

Space Exploration Day, honoring Apollo 11 ‘s first-ever landing on the Moon, is July 20th, but the entire trip spanned July 16-24, 1969, so chapters tend to celebrate on the most convenient of those dates (such as the North Texas Moon Day above). On Saturday, July 21, St. Louis Space Frontier celebrated with an outreach table at the Science Center’s “SciFest: One Giant Leap.” That’s the date in 1969 when day Apollo 11’s Neil Armstrong and Buzz Aldrin flew the Lunar Module (LM) off the Moon to join Michael Collins in the Command Module fort their safe return to Earth. The chapter invited their volunteers to come and talk to people about their favorite Apollo mission, tell them about St. Louis Space Frontier, and recommend that they attend the Destination Moon exhibit. Some even brought favorite Apollo 11 artifacts to touch or (if fragile) to look at.

For years, the DC-L5 chapter has been interviewing interesting people on space-related topics for their 30-minute Around Space public access TV broadcasts. These are now being placed on the NSS YouTube Channel, with 21 uploaded so far. Topics include telescopes, asteroid mining, NASA’s mission to Pluto, ESA’s Moon Village, astronautical artist David Robinson’s solar system art, and even songs about Kids in Space. See them at  www.youtube.com/playlist?list=PLaBObyQHLzmpr_riOo3Vdx6XeUttFNINt.

About 13 Phoenix NSS and Moon Society members attended the August 20th Arizona State University conference on space innovation. The conference allowed space industry professionals to bridge the gap with congressional professionals by offering ideas, concerns and information. This was a great opportunity to listen to members of the Arizona congressional delegation give their opinions on several space topics and to hear from NASA Administrator Jim Bridenstine. A few chapter members had an opportunity to ask questions which allowed panelists to answer candidly about different aspects of space advancement and road blocks. For a summary see asunow.asu.edu/20180820-solutions-asu-hosts-congress-members-industry-leaders-conference-space-innovation.

The Chapter’s September 15th meeting will feature Tanya Harrison, director of research at Arizona State University’s Space Technology and Science (NewSpace) Initiative, on the topic “Cloudy with a Chance of Dust Storms” (all about weather on Mars). For details see the Phoenix Chapter website.