NSS Movie Review: In the Shadow of the Moon 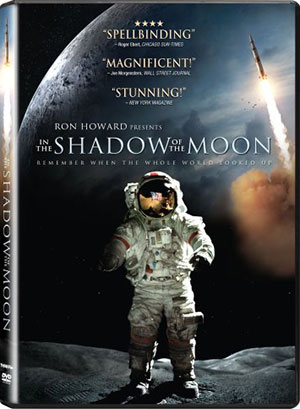 As a special treat, employees at NASA’s Marshall Space Flight Center in Huntsville, Alabama got a sneak preview of In the Shadow of the Moon, an independent film now produced by Ron Howard about the Project Apollo astronauts. Told in their own words, the film intersperses new interviews with historical footage and takes an historical look at the program, from the early 1960s to Apollo 17, concentrating on Apollo 11 and 13. As a space fan long familiar with much of the history, I was pleasantly surprised to see recent interviews, previously unseen historical footage, and some new, small “untold stories” from the men who flew to the Moon. If it comes to a theater near you, go see it. This is a classy, understated, well-done production.

The astronauts themselves are getting old—mostly in their 70s now. It is important that we hear their stories as first-person narratives, similar to the stories our grandparents tell about where our families came from, what sorts of lives they lived, and so on. They connect us to our past in a very personal, intimate way. The movie does not include a narrator, but only some subtitles that appear occasionally to remind us that “these are the only people to set foot on another world.”

The film does have its cinematic quirks, such as extra-long “reaction” shots or pauses, as if we’re meant to take a long, lingering look at these men who went to the Moon. And for reasons that eluded me, the camera appeared to crowd Buzz Aldrin, making him fill more of the screen than the others in their interview shots—his choice, or the filmmakers’?

What I think is marvelous to see is how the personalities of the astronauts come forth as they speak: Aldrin is still, unashamedly, “Dr. Rendezvous,” sheepishly admitting to being more interested in talking about orbital mechanics than conventional socializing. Gene Cernan comes across as a genial, animated talker. Al Bean is jolly, delightfully human, and unashamed to speak of humor or fear. John Young is quiet, low-key, and terse, in contrast to his Apollo 16 crewmate Charlie Duke, who came away from the space program proud and inspired by what he’d done and strengthened in his Christian faith. Ed Mitchell takes a more animistic, New Age approach to his experience, but is spiritual about the journey nonetheless. It would have been interesting to hear Neil Armstrong speak, but he has maintained his privacy, and the other astronauts seem to appreciate his need for it.

It is appropriate, perhaps, that the interviews conclude with the astronauts’ discussions about what the experience of traveling to the Moon was like and what it meant to them. For as the late Apollo 1 astronaut Gus Grissom once said, “In the final analysis, only Man can evaluate the Moon in terms understandable to other men.”