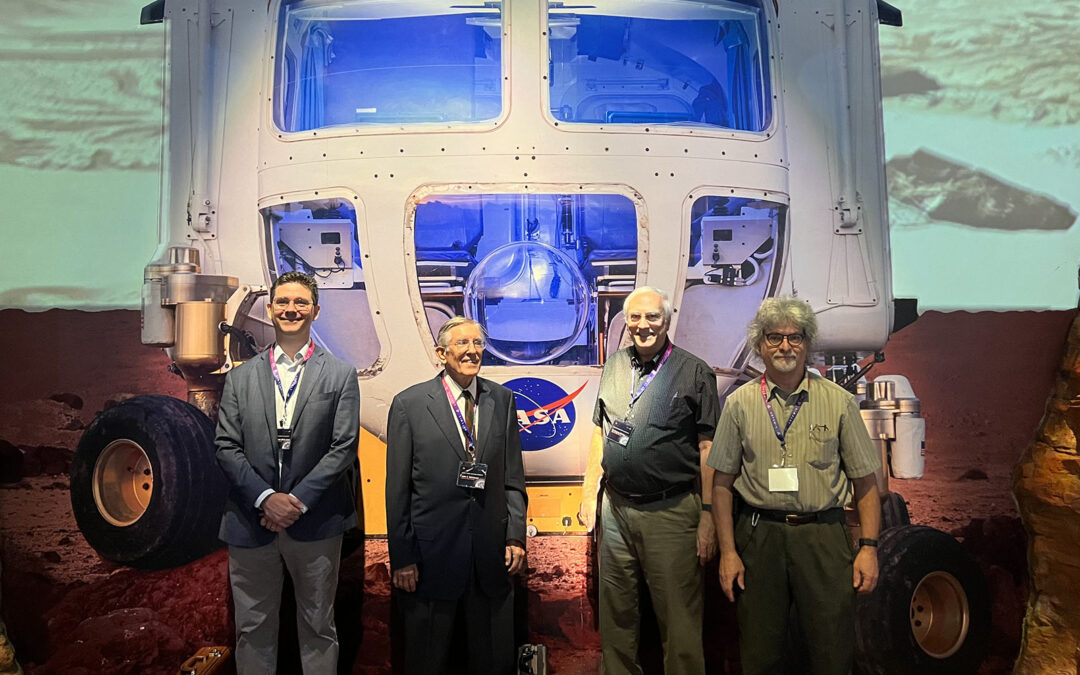 By John K. Strickland
NSS Board of Directors

In May of 2022 I received an emailed request from NASA to respond to a list of “Moon to Mars Objectives.” This seemed to be similar to NASA Requests for Informaton (RFI’s) I had received in the past. I responded to the request and on June 14th I got an invitation from NASA to attend the Moon to Mars Objectives Workshop (M2M) on June 28-29, 2022, at Johnson Space Center. NASA said we could send a team of four “subject matter experts.” NSS COO Dale Skran rounded up some people he thought would be good NSS representatives who would know how to present to NASA and we got together and started planning what to present.

The NSS presentation team (pictured in image from left to right) consisted of:

We also had a very good advisor in Dave Huntsman, a NASA retiree, who participated in most of our work sessions to prepare our presentation.

When we reviewed the Welcome Packet a few days before the workshop, we realized that the Workshop would not really be a workshop per se, but a forum for small groups representing both companies and non-profits to present their ideas to NASA. So we planned accordingly to take maximum advantage of the time outside our scheduled meeting to meet and talk with NASA officials and attendees during free time.

The event was held in Space Center Houston, the official NASA visitor center for tourists, but also frequently used for smaller NASA events. The first event on Tuesday morning, held in an auditorium on the main floor, was an introduction by NASA senior officials which lasted about 90 minutes. After that, NASA started the series of three concurrent tracks corresponding to the NASA Directorates:

The meetings consisted of 30-minute interviews and discussions headed by the Associate Deputy Administrators from each Directorate at NASA Headquarters. Due to the small size of the upstairs conference rooms, only the invited group and the NASA officials could fit in the room.

During the rest of the time, our group talked to representatives from many of the other groups and held a planning session for our presentation, while the interviews with other groups continued. Our event was on Wednesday at 9:50 am, but it lasted into a coffee break, ending at about 10:30 am. There were eight NASA officials and the four of us, packed into the relatively small conference room. David Cheuvront, who had previously worked with three of the NASA officials before he retired, led the presentation, but the rest of us chimed in at appropriate times with supporting comments.

Our presentation was based on a set of PowerPoint slides which did not emphasize our goals for space settlement, but focused on topics that we thought the NASA people would be more open to, like enabling space development in ways where NASA could help commercial companies attract private investment, such as developing infrastructure and actually utilizing space resources for reusable crew and cargo-carrying spacecraft. The officials were quite interested in our presentation and asked a lot of good questions.

We were surprised, however, when one of them asked “What is space development?” NASA uses and discusses in its publicity a lot of the components of this, and has sponsored funded research on this topic, but does not seem to execute many of them. We pointed out that we did not want NASA to stop its current programs, but simply to add “Enabling Space Development” as a new objective.

The Welcome Packet had specified that everything was to be addressed in regards to the “objectives” which had been the subject of the survey, “not specific technology solutions, architectures, procurements, new destinations, or anything else that addresses how the Moon-to-Mars objectives should be achieved.” We included examples of ways NASA could do things differently to help enable development that would lead to economic sustainability.

Some of us had had contact with the officials in the room before, and after the meeting ended, I was able to meet Michelle Munk, whose papers on Entry, Descent and Landing (EDL) are referenced twice in my books. She is also the Acting STMD Chief Architect, co-led our meeting, and recognized David from having both worked in the NASA JSC Advanced Development Office almost 20 years ago.

Our general impression was that the officials were significantly impressed both by the content of our presentation and the professional way it was presented. They were especially impressed by a correlation table that David created to help NASA link our issues with objectives that were assigned to other tracks.

After the meeting, our group of four held a debriefing in the Space Center cafeteria, which lasted until almost lunch time. Upon returning home, we worked multiple afternoons to finalize a version of our presentation to be released to NASA, as well as a detailed report to the NSS leadership.

Hopefully this will be the beginning of a more productive interaction between NSS and NASA, possibly including NSS responding to future NASA RFIs.