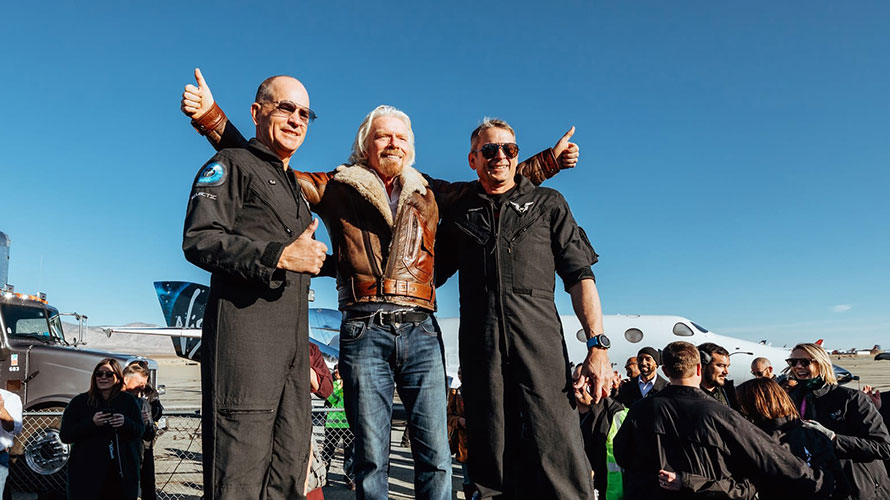 When asked by NSS about the historic achievement, Whitesides said, “What we witnessed today is more compelling evidence that commercial space is set to become one of the twenty-first century’s defining industries. Reusable vehicles built and operated by private companies are about to transform our business and personal lives in ways which are as yet hard to imagine. New enterprises are being created which will become hugely valuable, while enabling humanity to better manage some of its greatest future challenges. The flight was a remarkable achievement brought about by the skill, dedication and support of our shareholders, staff, customers, partners and many other stakeholders. We extend our congratulations and thanks to each and every one of them.”

Bruce Pittman, NSS Senior Vice President, said, “NSS congratulates Virgin Galactic and George for the successful flight of VSS Unity to suborbital space. To achieve this goal Virgin Galactic had to overcome many challenges and setbacks, but in carrying through on his promise Sir Richard Branson has opened the door for commercial human spaceflight. Well done, Sir Richard!”

The historic flight started at about 7:10 am PST out of the Mojave Air and Space Port in California. VSS Unity was released about 8:00 am from WhiteKnightTwo. Then Pilot In Command Mark “Forger” Stucky and test pilot Frederick “CJ” Sturckow (pictured above with Branson) ignited Unity’s rocket engine, forcing the space plane at over 3 Gs into its steep climb toward space. This important flight marks the first time since the discontinuation of the NASA space shuttle program in 2011 that astronauts have launched to space from American soil.

In addition to being a fully instrumented test flight it was also the first revenue producing flight for Virgin Galactic, with four NASA space science and technology experiments on board. It is expected that 2019 will see both Branson and the first paying space tourists boarding VSS Unity flights.

The Spaceship Company, the other Virgin Group company that built WhiteKnightTwo and VSS Unity, has started construction of a second SpaceShipTwo type space vehicle for commission in 2020. NSS lists space tourism as a milestone in its Roadmap to Space Settlement (space.nss.org/roadmap) which outlines our potential future in space.