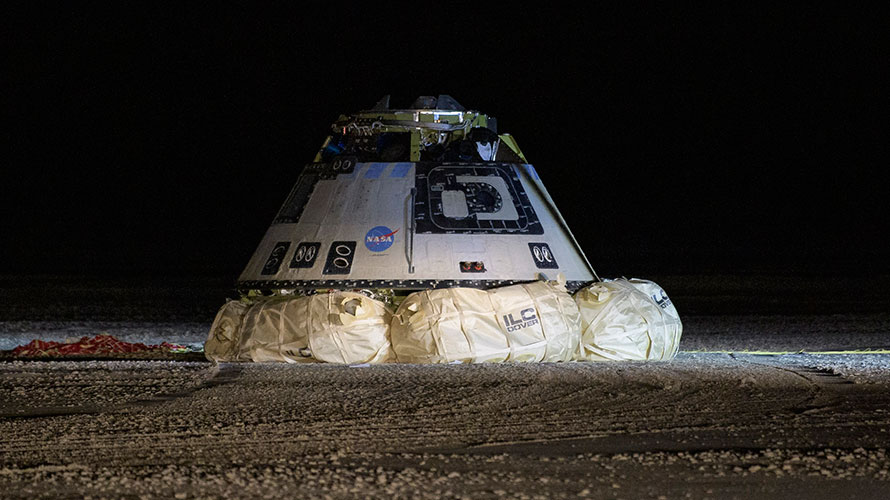 With the setback just suffered by Boeing, in which a Starliner launched and landed successfully (photo above) but proved unable to dock with the ISS, the long knives are out.  We are seeing articles with titles like “Boeing Blunder” and no doubt soon to follow general attacks on the Commercial Crew program, trotting out every issue Boeing and SpaceX ever had that is even remotely related.  What is the space interested public to think?

Firstly, every time there is some kind of problem on a space flight, concern trolls roll out whatever was said the last time there was an incident. “SpaceX is in big trouble.” “Boeing is corrupt.”  “SpaceX employees smoke weed while they work.” “Boeing technology is obsolete.” And so on. Almost without exception, these kinds of statements are hysterical exaggerations, often produced by disgruntled ex-employees of either company, or people who are paid to troll. It should be kept in mind that short-sellers of both the Boeing and Tesla stocks benefit from general concern about Boeing and Elon Musk. Some short sellers are unscrupulous enough to employ paid trolls.

Second, the “correct” number of failures in space is not zero. In fact, it many be higher than is the actual case for the Commercial Crew program.  Having a perfect test record means that much more testing was done more frequently for a longer period of time than is economically optimal. Once a project gets to a certain level of complexity, it makes sense to have a test with a significant chance of failure rather than continue with simulations and component tests. Really complex systems must be tested in operation for years to “work out the bugs.” By in-operation I mean “flight.” By the standards of the chip industry, the auto industry, and the telecom industry rockets are grossly undertested in flight, and over-tested in simulation/by components. The economic optimum might be cutting simulation/component testing by 50% and increasing flight testing by a factor of 1000x. Part of the reason for this is that “full-up” normal use-case testing is much more effective at finding bugs than simulator or component testing, especially in complex systems. It is only very recently, with the re-use of the F9 first stage and Dragon capsules, that we are taking baby steps to get to the flight test levels that will produce a high degree of reliability.

Third, when Commercial Crew started, there was a widespread attitude that Boeing was the “adult supervision,” the “reliable partner,” and that although their solution was more expensive it would be more reliable. In the intervening time, SpaceX has rocketed ahead in terms of experience, so that at the current point these kinds of invidious statements are not appropriate. For example, it is virtually certain that some time in 2020 the F9 will surpass the Atlas V record for consecutive successful launches. In fact, both Boeing and SpaceX appear to be encountering similar problems at similar rates in the Commercial Crew program. This suggests that it is time to put aside assumptions that SpaceX is an untrustworthy “new kid on the block.”

Fourth, NASA made a fundamental error in how Commercial Crew was organized. In an alternate universe, NASA would have insisted that Commercial Crew be based on flight-proven vehicles and capsules used at least ten times to send cargo to the ISS. This would have meant making minimal modifications to the Dragon and flying a smaller crew. It would also have meant that Boeing would have first built a cargo capsule and demonstrated safe operation of the capsule to the ISS many times. Instead, NASA required SpaceX to significantly modify the Dragon to produce the Dragon 2, increasing cost and risk. Until NASA moves beyond the idea that it is OK to fly humans on a vehicle after a couple of test flights, space flight will be a high-risk activity.

Fifth, it is a commonplace that requirement changes increase cost and risk. The Dragon 2 has suffered from a long list of changes. One, the switch from powered landings on the ground to parachute landings on the ocean, can be laid on SpaceX. The rest, including adding a fourth parachute, and cutting back the number of seats, come from NASA directly or indirectly. It is not well known to the public, but Boeing has also been impacted by NASA-directed changes as well. The initial Starliner that competed for CRS-2 was volume limited, and lost out in the competition. The design Boeing submitted for Commercial Crew relied on manual hatch opening, requiring a crew to dock to the ISS. But then NASA changed the requirements so that even though Starliner would not normally dock autonomously, it would be required to have this capability. This means that in effect NASA has a fourth cargo option for CRS-2 without any additional costs. However, this back-and-forth certainly cost Boeing money and time, and may have contributed to the recent difficulties in docking with the ISS. Regardless of their source, every change increases risk. Until we can have a human spaceflight program without constant requirement changes, human spaceflight will be risky. In fact, it can be argued that the most important thing SpaceX learned from Commercial Crew is to work independently of NASA on human spaceflight in the future.

Sixth, it should be remembered that although Commercial Crew has the form of a public/private partnership, with SpaceX and Boeing owning the capsules and rockets while providing a service to NASA, 80-90% of the money comes from NASA and NASA is “steering the requirements boat” in the name of safety. SpaceX and Boeing do not have the freedom to optimize their operations toward economic return. Although SpaceX is gaining valuable experience with human spaceflight, and Boeing adds a level of dissimilar technical redundancy that is essential, overall Commercial Crew has fallen short of the potential of a real public-private partnership targeted on developing commercial markets.

Seventh, I’m going to venture a bit more into the speculative zone. It seems apparent that that the Starliner issue is a software issue. Boeing has been having serious issues with the 737 software of late. Is it possible that we are reaching the point that aerospace hardware is getting more reliable, and software will be the major cause of failures? Back in the 80s while working at Bell Labs I was assigned to a tiger team investigating PBXs catching on fire. The manager who empowered us was convinced that the problem was related to hardware—after all, the thing was catching on fire!—and gave us all kinds of advice about what to look for as possible issues. It turned out the problem was a software error in a maintenance routine that decided to run a test on a tape drive, and kept running that test until the drive overheated and the tape caught fire. Even if space hardware currently falls short of the use-case reliability of airplanes, chips, autos, and telecom gear, as hardware gets more reliable, software will become a greater source of errors, and companies with software in their DNA like SpaceX will have an increasing advantage.

In conclusion, we can be confident that both Boeing and SpaceX will overcome their current issues with Commercial Crew, and working together and with NASA they will restore independent American access to space. They will do this because at this point failure would be catastrophic for both companies, and because they have both already achieved significant success, success which tends to be overlooked when new problems are discovered during testing.