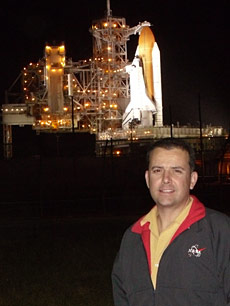 Lieutenant Colonel Paul E. Damphousse is a former Executive Director and former member of the Board of Directors of the National Space Society.

Paul was born in Melrose, Massachusetts and raised in Colorado Springs, Colorado.  He attended the University of Arizona on a Navy ROTC scholarship and graduated in 1989 with a Bachelor of Science degree in Management Information Systems.

In August 1990, LtCol Damphousse completed the Basic School in Quantico, Virginia.  In January 1991, he began flight training in Pensacola, Florida and Corpus Christi, Texas and was designated a Naval Aviator in July 1992.  In May 1993, he was designated a Helicopter Second Pilot in the CH-53E Super Stallion helicopter and was assigned to Marine Heavy Helicopter Squadron (HMH)-462 at Marine Corps Air Station Tustin, CA.  He was designated an Aircraft Commander in August 1994.

During his time with the Heavy Haulers of HMH-462, LtCol Damphousse completed a six-month deployment to Okinawa, Japan as part of the Unit Deployment Program.  He also participated in two shipboard deployments to the Western Pacific and Persian Gulf with the 13th and 15th Marine Expeditionary Units aboard the USS Peleliu (LHA-5).

In May 1998, LtCol Damphousse reported to Headquarters, Third Marine Aircraft Wing (3d MAW) at MCAS El Toro, California.  Here he served as the Aviation Safety Officer and participated in the movement of 3d MAW to its new home at MCAS Miramar, California.  In October 1998, after completion of Tactical Air Control Party training and subsequent designation as a Forward Air Controller, LtCol Damphousse was assigned to the Wolfpack of HMH-466 where he served as Quality Assurance Officer.

In November 1998, LtCol Damphousse was selected to attend the Naval Postgraduate School (NPS) in Monterey, California.  He graduated in December 2001 with a Master of Science degree in Astronautical Engineering.  Upon graduation and designation as a Marine Corps Space Operations Officer, LtCol Damphousse was transferred to the Operations Directorate (J32) of United States Space Command in Colorado Springs, CO.  Here he served as a Space Control and Special Technical Operations action officer and was involved in highly classified operational planning for Operations Enduring Freedom and Iraqi Freedom.

LtCol Damphousse reported to the Flying Tigers of HMH-361 at MCAS Miramar in December 2003 as the squadron operations officer and deployed to Iraq in support of Operation Iraqi Freedom II in August 2004.

Following his time with the Flying Tigers he assumed the role of Director of Safety and Standardization for Marine Aircraft Group (MAG)-16.  Between combat deployments he completed a tour in the Defense Advanced Research Projects Agency (DARPA) Service Chief’s Internship Program.  Here he investigated programs relevant to current Marine Corps operations and future warfighting concepts as well advanced space programs and concepts.

LtCol Damphousse returned to Iraq on his second combat deployment in February 2006.Shortly after his arrival he assumed the role of Operations Officer for MAG-16.  In this capacity he was responsible for the daily planning and execution of combat operations for all Marine aircraft in Iraq, representing every USMC type/model/seriesaircraft and the largest MAG in Marine Corps history.

Upon his return to the U.S. in February 2007, LtCol Damphousse was assigned to the National Security Space Office (NSSO) in Washington, DC initially as the Chief Engineer for the Spacecraft Communications Functional Integration Office.  Shortly after his arrival he created and led the NSSO’s Advanced Concepts Branch.  Here he assumed the lead for the NSSO’s efforts to advance Space-Based Solar Power capabilities and created a concept of operations and technology roadmap for the Marine Corps’ Small Unit Space Transport and Insertion (SUSTAIN) concept.  He also led the NSSO’s effort to leverage and catalyze emerging space access and suborbital capabilities for the entire National Security Space enterprise. In 2008 he was selected a second time as a Marine Corps Astronaut Candidate.

In September 2009 he was hand-picked to serve as Florida Senator Bill Nelson’sNASA Fellow.  In this capacity he advised the Senator on all civil and national security space matters, and played an instrumental role in advancing new commercial spaceflight activities.

LtCol Damphousse returned briefly to the Pentagon as the NSSO was reorganized into the Executive Agent for Space Staff and served within the newly-formed Defense Space Council Secretariat.