Recovering From A Trip To Space Heaven: Some Thoughts About Juno’s NASA Tweetup 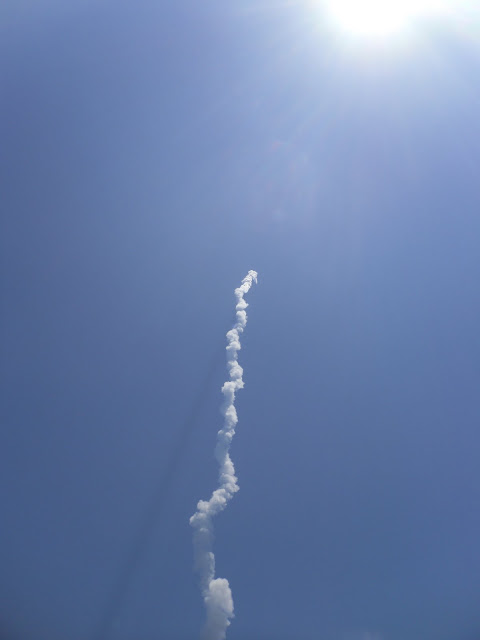 Juno’s Atlas V is on top of this plume, August 5th, 2011. At this time, the Atlas V was traveling downrange towards its desired interplanetary hyperbolic trajectory (Juno is headed to Jupiter). Also, note the massive shadow to the left from the plume/launch vehicle. Photo taken by Emily Carney.
I am going to write a more detailed article about the Juno Tweetup for the great online publication Kittysneezes, so keep your eyes and ears prepared for that. However, in the meantime, I just wanted to say how grateful I am to NASA and to my fellow Tweeps. I had what can only be described as two of the greatest days of my 33 years on Earth, and I saw things that most people never get to view in their entire lifetime right in front of me. I will always be indebted to NASA for their wonderful generosity in allowing me to have this fantastic two-day experience. It can only be described as “Space Heaven.”
To all of the people out there who may decry NASA as being “dead” due to the end of shuttle missions and governmental budget cuts, I can assure you that the organization is more than alive and well. NASA administrator Charles Bolden (also, a former astronaut) discussed plans for future manned missions with us, meaning that we will see U.S. astronauts go into space sooner than expected. After all, you can’t close space church!