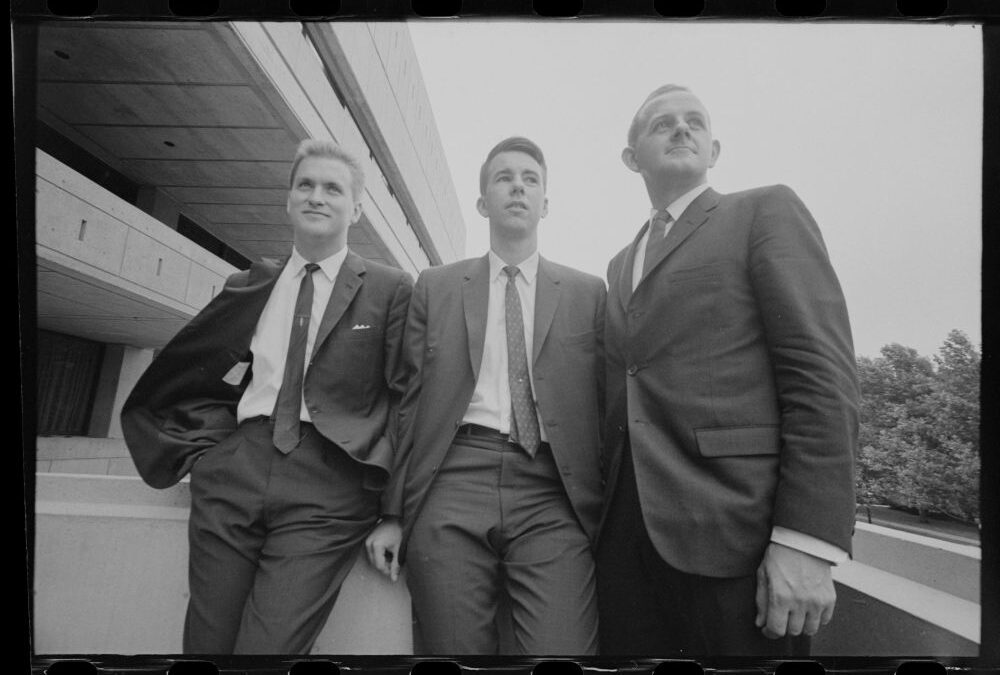 Newly unearthed 1967 photo negatives made accessible via the Digital Public Library of America show three 1967 MIT astronaut-scientists, apparently before their names were unveiled to the general public. Credited to the Boston Public Library, the photo series shows Drs. Anthony England, Philip Chapman, and William Lenoir posing upon inside and outside stairwells on the institution’s grounds, and also reveal an early press conference featuring the astronauts and their families.

Dated August 4th, 1967 by the archives accessed (author’s note: the entire astronaut group was publicly revealed on August 11th that year), these photos are notable in that they are very different from typical “astronaut portraits” of the era, perhaps owing to the fact that they seem to be a product of MIT’s press machine, and not NASA’s. The photographer is listed as Leo Tierney. While NASA’s astronaut group photos and portraits were traditionally formal and allowed little room for individuality at the time, England, Chapman, and Lenoir look less like three astronaut hopefuls, and more like a sexy, dangerous jazz power trio about to drop the hottest vinyl Blue Note released that year.

Two of the astronauts would fly in space 15+ years after these photos were taken; save for one Skylab backup assignment by the group’s Dr. Story Musgrave and a few CAPCOM stints, the 1967 class would largely be consigned to the Space Shuttle program. Lenoir, who died in 2010 at age 71, flew on the fifth Space Shuttle mission, STS-5, in November 1982. England, who resigned his NASA post in 1972 but magically was allowed to return in 1979, flew as a mission specialist on 1985’s STS-51F/Spacelab 2 (and survived the Shuttle program’s only on-ascent abort). Chapman, who resigned from NASA in 1972, did not fly in space, but he would probably be the first to argue that his post-NASA career was still pretty full. Fun fact: a taqueria called Anna’s is now underneath the staircase in the featured photo.

Note: these images are presented without edits, and are for non-commercial use only.