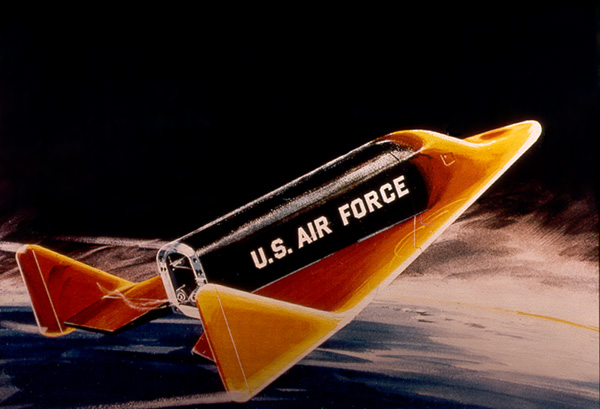 Sometimes, young adult novels from the past define the desired values and “pulse” of an entire era. One book series, very aggressively marketed to teenage boys in the early 1960s, is the “Mike Mars” series written by science fiction author Donald A. Wollheim, and published by Doubleday. Begun in 1961, these books functioned as sort of “Hardy Boys”-type adventures for young men captivated by the burgeoning Space Race, all helmed by the fictitious Mike Mars, the series’ picture postcard-perfect, Air Force-gaga, utterly wholesome astronaut protagonist. In fact, Mike Mars seemed more wholesome and picturesque than actual astronauts hired in the early 1960s; the hardest thing ol’ Mike seems to imbibe in excess is milk.

The book jacket of 1962’s Mike Mars Flies The Dyna-Soar describes our hero as “the first astronaut in America’s secret space program, Project Quicksilver.” An illustration of Mars in the book’s first pages shows him as a tousle-haired, square-jawed, perfect vision of what an “astronaut” might look like around this time – or at least what people wanted astronauts to look like during this time. Mars’ mission in this tome is to test the nation’s “brand new space glider,” and the book culminates in a too-crazy-to-be true “rescue” mission in which Mars utilizes the space plane to rescue an astronaut in trouble.

All the while, we find out a few things about our hero: his name isn’t actually Mike Mars, its Michael Alfred Robert Samson, but Mike Mars became his nickname. Moreover, he made up his mind to become a “space flier” while he was in junior high school, even though that career didn’t yet exist at the time Mars was probably in junior high. But as we discover, timelines don’t really matter in this book, as the astronaut flies a spacecraft that, in real life, would soon be canceled, and engages in some rather unbelievable missions. This book is and remains pure space propaganda, designed to influence young American men to stay clean-cut, and pursue careers in space, but it’s enjoyable space propaganda, even though the plot line is over-the-top. It’s escapist entertainment, at the risk of exclusion – social justice issues of women and other minorities in space receive no mention at all. 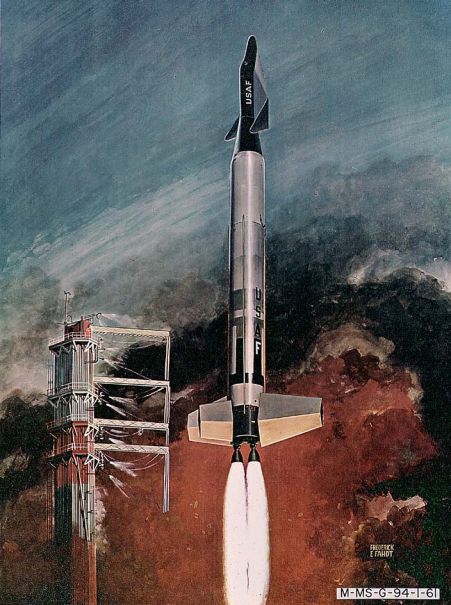 NASA image, 1961: “A Dyna-Soar (Dynamic Soaring) vehicle clears the launch tower atop an Air Force Titan II launch vehicle in this 1961 artist’s concept. Originally conceived by the U.S. Air Force in 1957 as a manned, rocket-propelled glider in a delta-winged configuration, the Dyna-Soar was considered by Marshall Space Flight Center planners as an upper stage for the Saturn C-2 launch vehicle.”

The book does provide an optimistic – some would say unrealistic – view of a Space Age future. By the time this book was being written, according to Boeing: “In 1961, the U.S. Air Force had contracted with McDonnell Aircraft to build six experimental aerodynamic/elastic structures environment test vehicles that roughly resembled the Dyna-Soar. The scaled-down test vehicles were 5.7 feet (1.7 meters) long and used Douglas-built Thor or Thor-Delta boosters, which in turn used engines built by North American’s Rocketdyne division.”

However, the X-20 would never make it past the mock-up stage. While astronauts had been selected for the program as far back as 1960, by late 1963 the program was history (this great article by Andrew LePage summarizes why the program was canceled), and the U.S. Air Force began to focus on the Manned Orbiting Laboratory program in a bid for human spaceflight (that, too, would be canceled in 1969). However, the Dyna-Soar left resonances. Boeing did state: “The program…demonstrated that winged reentry vehicles could traverse the upper atmosphere.” This factor would be a major contributor towards future space planes, including the Space Shuttle.

So sadly, we can only enjoy the Dyna-Soar’s travels in this short volume. The Mike Mars series yielded seven other titles, listed below, you can peruse if you want to take a testosterone-fueled blast to the past atop a Titan rocket: