Space In The Seventies: ATS-6, Apollo-Soyuz, and TDRSS 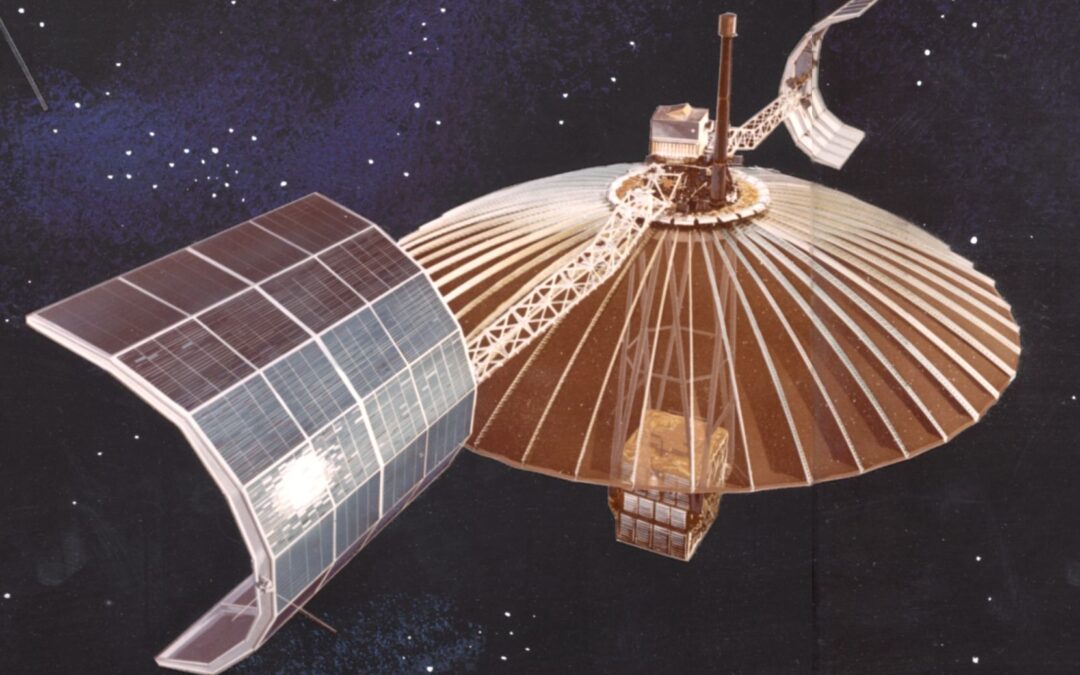 In the last two seasons of the Apple TV+ series For All Mankind, viewers have seen the show’s NASA build a nuclear-powered lunar base at Shackleton Crater, fly Skylabs docked with Space Shuttles in Low Earth Orbit, and conduct a historic rendezvous during the Apollo-Soyuz Test Project with little interruption in communications with Earth or other spacecraft. The show offers a tantalizing “what if” into a retro-futuristic past advanced by innovations in not just society, but also technology.

As we know, time moved a little slower during NASA’s real 1970s through 1980s, but one experimental satellite program contributed to the actual Apollo-Soyuz mission in July 1975, and later, to less interruptions in voice and data during the Space Shuttle program and at present time, the International Space Station (ISS). This blog series, called Space In The Seventies, starts with a look back at the Applications Technology Satellites (ATS), described by NASA in a June 1971 booklet called Satellites At Work as “a testing laboratory for new concepts.”

ATS at the Dawn of the Seventies

By the publication of Satellites At Work in mid-1971, five ATS satellites had been launched; they had been built by the Hughes Aircraft Corporation in conjunction with NASA’s Goddard Space Flight Center in Greenbelt, Maryland. The first ATS satellite, launched on December 7, 1966 by an Atlas-Agena launch vehicle from Cape Canaveral Air Force Station’s LC-12, represented a massive step forward in investigating the geosynchronous orbit environment and imaging the Earth from that vantage point. This innovation would aid in creating weather satellites that could survey conditions from thousands of miles away. It’s difficult to believe this now, but potentially disastrous phenomena such as hurricanes and blizzards couldn’t be predicted with much precision back then. Being able to see full-disc images of Earth in real time over extended periods represented a huge breakthrough in predicting weather trends. 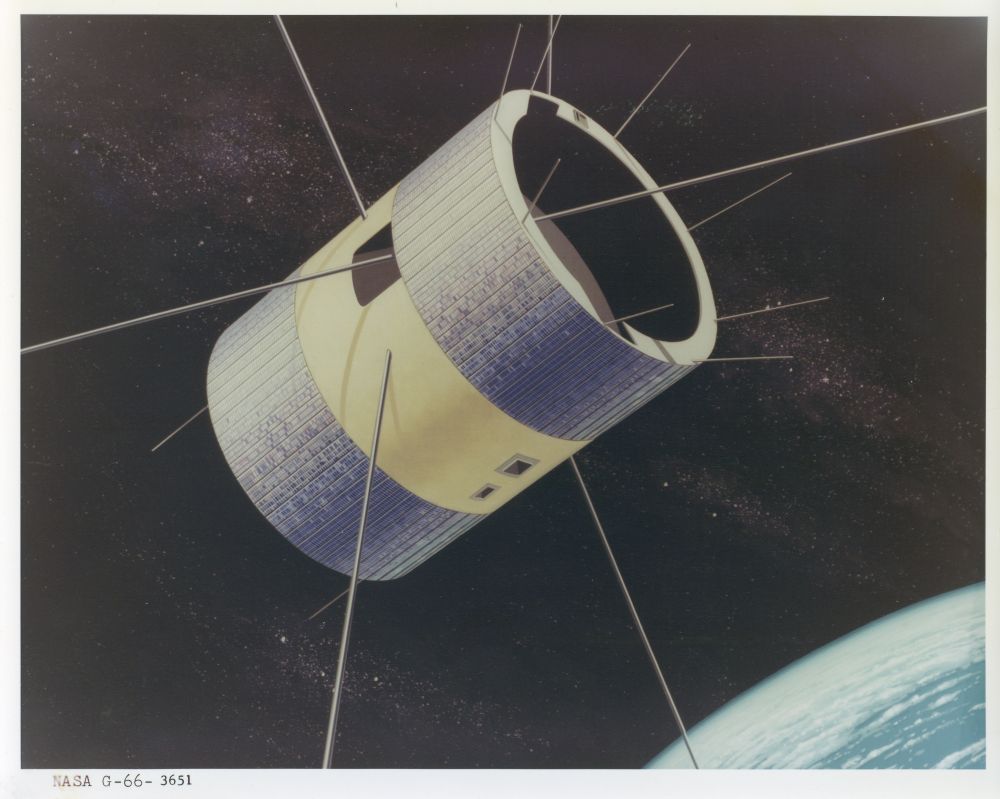 On December 22 that year, ATS-1 captured the first full-disc image of Earth and the Moon from geosynchronous orbit, 22,300 miles away from Earth. In an ATS summary provided by NASA Goddard, this was “a feat often mistakenly attributed to Voyager 1. (Voyager 1 captured the first single-frame image that showed the entire Earth and moon.)” This type of imaging would influence the Nimbus program, and later, the ongoing GOES series of satellites. ATS-1 would provide meaningful data through 1972, and was deactivated at the beginning of 1978. 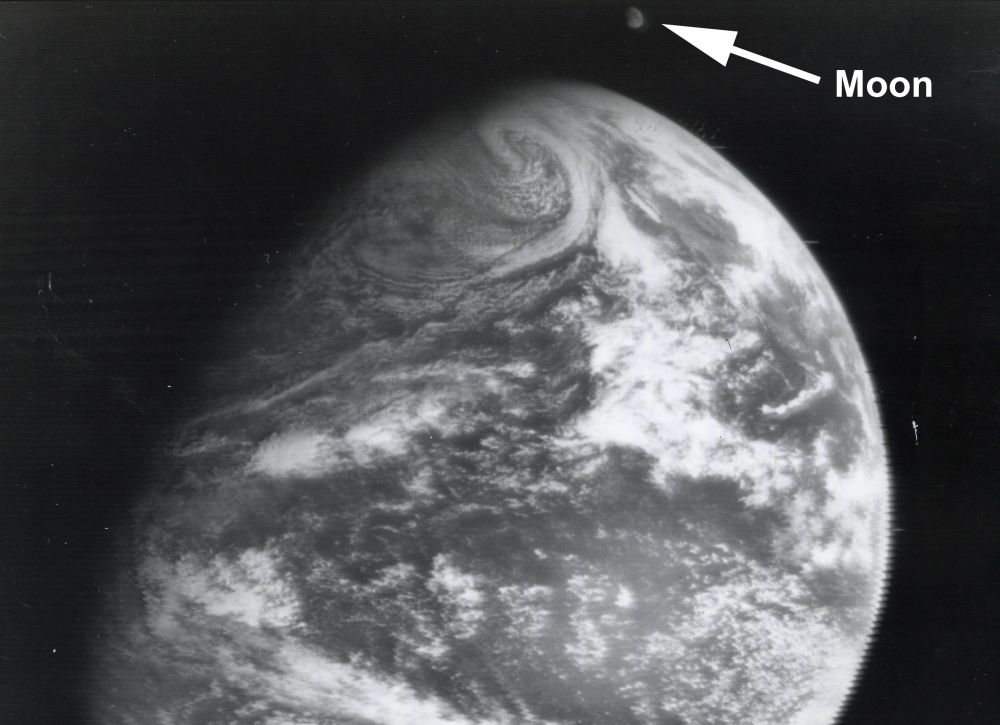 A table showing the other ATS launches between 1966 and 1974 is listed below:

Fast-forward to May 30, 1974; a new ATS satellite, ATS-F (to be renamed ATS-6 once it reached its desired orbit) was launched from Cape Canaveral’s LC-40 launchpad aboard a Titan III-C. ATS-G, which is listed in Satellites At Work, was canceled due to budget cuts in 1973, and the final satellite in the series was built by Fairchild Industries, not Hughes. According to NASA, “The ATS-6 was a much heavier, more sophisticated satellite than its predecessors. ATS-6 was a three axis stabilized spacecraft which deployed a 9.14-meter diameter (about 30 feet) antenna reflector. In addition to its technology experiments, ATS-6 became the world’s first educational satellite and the first satellite able to track sub synchronous S-Band satellites.” Indeed, ATS-6 looks like a completely different beast in comparison to ATS-1, and even in appearance, illuminated how technology had advanced by leaps and bounds in less than eight years.

By 1975, ATS-6 would allow for connections between remote classrooms and medical facilities well before Zoom, FaceTime, and Skype were names on our tongues and in email links. Examples offered by NASA in a 1975 booklet called New Horizons related, “In Alaska, 18 communities in remote areas with no previous TV reception of any kind took part in two-way classroom instruction sessions via [ATS-6]. …Doctors in remote outposts consulted directly with top specialists, transmitting patients’ records and X-rays and actually examining the patients before television cameras in live, two-way voice and picture transmissions.” (On a quaint note, New Horizons was sold for $2 at the Smithsonian Museum Shop in 1975; this author purchased it on Etsy for $14.79.) That summer, ATS-6 would validate the then-embryonic idea of a Tracking and Data Relay Satellite System (TDRSS) during Apollo’s swansong, the Apollo-Soyuz Test Project.

Another Type of Handshake In Space

As late as 1974, Skylab astronauts depended on ground stations to communicate with flight controllers and their own families. One Skylab family member recounted to me that she often talked to her husband as Skylab orbited from Hawaii through the continental United States, until the space station moved out of range. But a more reliable solution was needed as NASA transitioned from the Apollo era to its next big human spaceflight endeavor.

As the 1970s transitioned into the 1980s NASA was developing the Space Shuttle, which was envisioned to deploy satellites, build space stations, and carry science labs in its payload bay. The latter missions, to be conducted with the European Space Agency (ESA) and christened Spacelab, would be data-heavy. NASA was looking for a way to stay in contact with its Shuttles without communication and data lapses as they passed into blackout zones between ground stations, and during reentry. By 1975, NASA was not only seeking a historic handshake between spacecraft commanders from two different, often opposed international superpowers, but also sought a “handshake” between Apollo, ground controllers, and ATS-6. This mission would yield, in verbiage from NASA’s 1976 Apollo Soyuz booklet written by Walter Froehlich, the “first communications between a manned orbiting spacecraft and ground controllers via an orbiting unmanned communications satellite.” 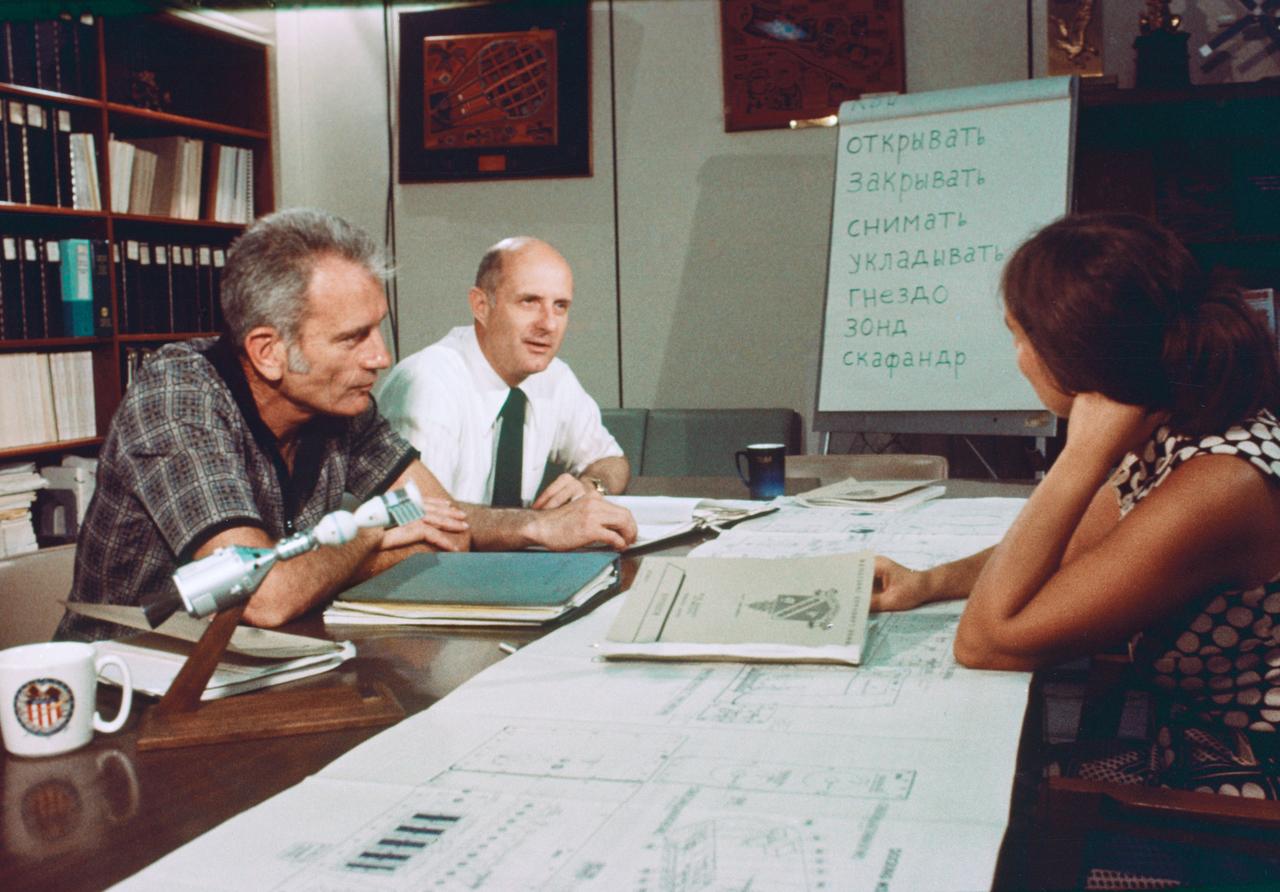 While mainly remembered as an exercise in Cold War détente, Apollo-Soyuz boasted a number of experiments encompassing astronomy, Earth observations, and life sciences. One experiment ushered in a new era of communications nearly eight years prior to the first TDRS deployment. According to a NASA history of TDRS-1, “The original concept of the Tracking and Data Relay Satellite (TDRS) started in 1975 when the Apollo-Soyuz mission conducted a relay demonstration with the Applications Technology Satellite (ATS)-6 and an antenna outside of Madrid, Spain. The relay demonstration proved successful with over 50% coverage in a single relay. At that time, the entire network could only provide 15% coverage.”

According to the Astronautix website, ATS-6 was also responsible for broadcasting some lighter moments happening aboard the Apollo spacecraft as its crew – commander Thomas P. Stafford, command module pilot Vance Brand, and docking module pilot Deke Slayton – closed in on Soyuz in Low Earth Orbit. On the mission’s first day, the Apollo crew was in the process of correcting their ship’s orbit in preparation for rendezvousing with the Soyuz spacecraft, helmed by Alexei Leonov and Valeri Kubasov. The website reported, “At 6:10, Brand asked [CAPCOM Richard] Truly to tell the launch crew at the Cape that they permitted a stowaway to board the spacecraft. ‘We found a super Florida mosquito flying around here a few minutes ago.’ Slayton said that he planned to feed it to the fish that they were carrying onboard if he could catch it, and Brand wanted to bring it back and give it astronaut wings. These transmissions were conducted through the ATS 6 satellite. While that particular communications satellite had been an unknown quantity throughout much of the mission planning, it was working very satisfactorily.”

This experiment confirmed that TDRSS was the way of the future as far as space-based communications was concerned. While the Space Shuttle didn’t fly until April 1981, the first TDRS satellite was deployed months before the first Spacelab mission took flight in late 1983. TRW’s TDRS-A (later TDRS-1) was deployed via Space Shuttle Challenger in April 1983, and enjoyed a successful 27-year-long run despite an Inertial Upper Stage malfunction initially threatening to place it in an incorrect orbit. The NASA TDRS-1 article continued, “The early designs for the Space Network (TDRS would be the space segment of the Space Network) included only two operational spacecraft at 41W (TDRS East) and 171W (TDRS West) and one on-orbit spare. The spacecraft was located in geosynchronous orbit at 22,300 miles above the Earth operating on S- and Ku- bands. The ground segment would be located, as it remains today, in White Sands, New Mexico. With these two spacecraft, tracking and data acquisition coverage increased from 15% to over 85% and the need for numerous ground stations around the world diminished.” 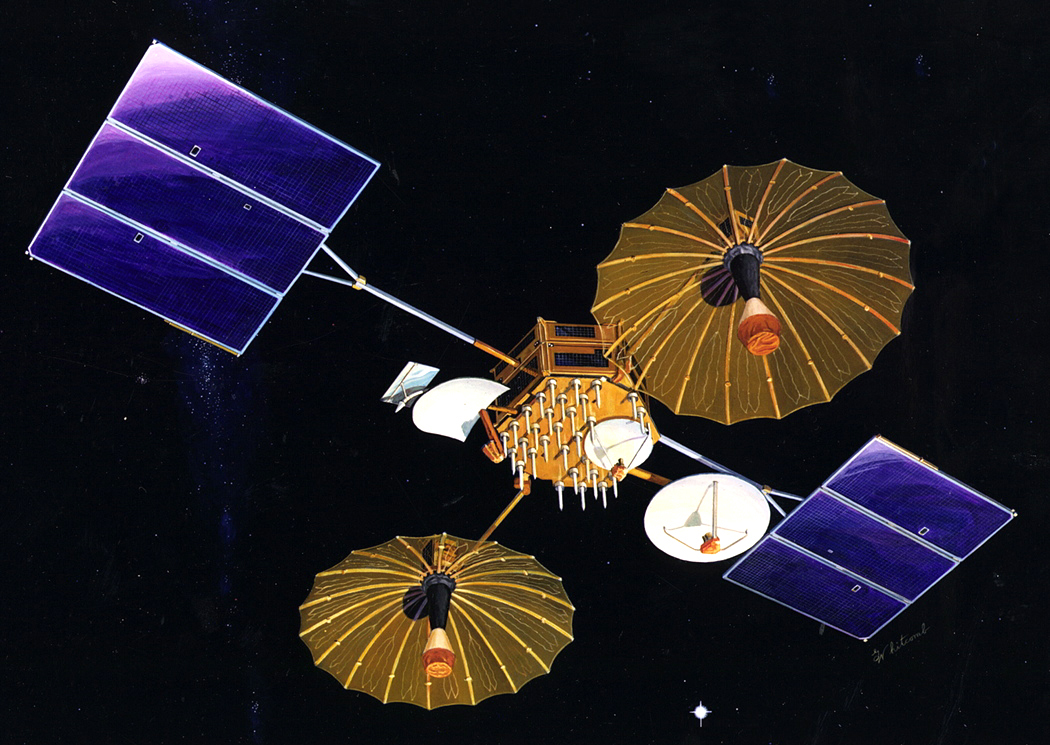 At present time, eight TDRS satellites are in service, which in part support the ISS. The satellite constellation also aids in military applications, communicating with other satellites, and providing communications in remote areas of the Earth, such as Antarctica. Seeing uninterrupted feeds from space are commonplace these days, to the point where we take spectacular views of Earth for granted.

But the technology owes its heritage to ATS-6, one of NASA’s powerhouses of the Seventies that saw its influence far outlive its lifespan. The satellite was decommissioned in July 1979, the same month Skylab fell back to Earth; its end also marked the conclusion of the ATS program.